HOLLYWOOD — An image of young women clad in colorful outfits peeping through ski masks while being detained and clobbered by the police has been a part of evening newscasts in the U.S. for some time, most recently during the Sochi Olympics.

Casual viewers have little understanding of the motivation of these women, carrying weapons of musical instruments. They do not seem to be causing any physical harm. However, in the eyes of the Russian authorities, they are at best hooligans, at worst, enemies of the state.

That basically sums up the theme of the hour-long documentary "Pussy vs. Putin," which has been making the rounds in the U.S., following its European unveiling.

At a private premiere in Hollywood on April 6, the film attracted a full house of diverse viewers. Their commonality was their definite enthusiasm about what they were about to witness.

The film unspools on the streets of Moscow, capturing the eight women setting the stage for what is to come. Swinging their guitars, they initially attract attention for their attire and seem intent on causing a certain amount of disruption.

For their part, the women focus on their mission of liberation. At first, both the public and the police are amused and bewildered as the "Pussy Rioters" climb up scaffolding that serves as their stage. They are then seen hopping on top of trams, daring the authorities to take action.

The whole scene resembles a circus act and soon the civil disobedience turns ugly as the police close in on the group at a Russian Orthodox cathedral in Moscow. It was here they performed an expletive-ridden song denouncing President Vladimir Putin, who is unsurprisingly the film's villain.

They head to the slammer in full view of the cameras, which continue to roll throughout the entire proceedings leading up to the ultimate conclusion as well as their much-publicized release from incarceration.

One wonders if the cameras were always there. I was assured by the filmmakers that the film was a documentary. No Hollywood techniques or trickery were involved, which is as good an excuse as any for the crude camera work.

The film also contains a cameo by a "guest Pussy Rioter." When she finally unveils herself, it turns out to be none other than Madonna.

As can be imagined, "Pussy vs. Putin" has very little commercial theatrical value, if any. It still has not found an exhibitor and would be best served by a cable television outlet like HBO.

Two of the principals traveling with the film told The Moscow Times that the purpose was to raise awareness rather than court commercial success. 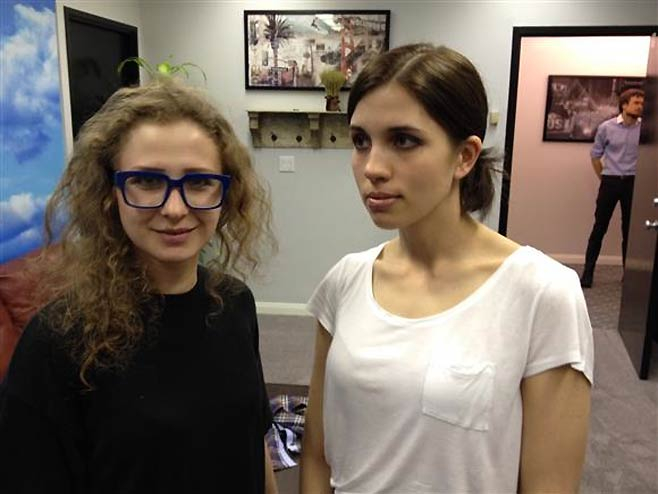 After a whirlwind tour of Europe and the U.S.' east coast, Nadezhda Tolokonnikova and Maria Alyokhina, accompanied by their trip sponsor Jaka Bizilj of Cinema for Peace, a German-based organization, were given a warm welcome at Hollywood's private Harmony Gold Theater.

Both Tolokonnikova and Alyokhina were given standing ovations when they appeared on stage at the conclusion of the film. "You are very brave," shouted a woman, who identified herself as a Russian emigre.

"It is great, they are calling attention to the deplorable human conditions [in jails]," said another.

The event was billed as Tolokonnikova and Alyokhina's "meeting the creative community" in Hollywood.

The duo arrived in the U.S. with former Secretary of State Hillary Clinton's seal of approval, who described them as "strong and brave young women."

That description was echoed both in the theater and at an exclusive reception and auction at Hollywood's trendy Acabar restaurant afterward.

"We support just treatment for all prisoners around the world," Alyokhina told diners. Next, Tolokonnikova read letters she had written in prison with her husband Pyotr Verzilov providing the translation.

Among the special guests at the event were Muscovite music producer Alexander Cheparukhin, an outspoken supporter of Pussy Riot.

"I met them when they were arrested," he told The Moscow Times. "For the cathedral incident they should have been given five days [penalty] to clean up the church. Not two years [of jail time]."

"The courts are manipulated by the Kremlin. That is why I got involved," Cheparukhin said.

Dinner and the auction that followed were hosted by film director Roland Emmerich, whose work includes "White House Down," and "Independence Day." He contributed a large sum of money to help Pussy Riot establish a nonprofit foundation in the U.S. Other attendees followed Emmerich's lead by making monetary pledges to help pay the women's travel and security expenses.