Moscow's connoisseurs of constructivism have their work cut out for them at the moment in a fight to save their most treasured landmarks. While the Shukhov radio tower has been seizing the limelight in recent weeks, Le Corbusier inspiration Narkomfin is now facing imminent threat.

Narkomfin's primary owner, Alexander Senatorov, CEO of investment group Kopernik, is preparing to launch plans for a full restoration project on the building, which he intends to begin in a year and a half.

However, there has been an outcry from heritage experts who say an illegal reconstruction project is already underway, and soon-to-be-ex-residents have started flying pirate flags from their apartments' balconies in protest.

Narkomfin, completed in 1932, was designed by Moisei Ginzburg and Ignaty Milinis for the People's Commissariat of Finance and provided the inspiration for Le Corbusier's residential housing designs known as "Unite d'Habitation." The most famous, in Marseille, France, is credited with forming the entire basis of the Brutalist architectural philosophy and aesthetic.

The building is hailed internationally as being of global significance and is a frequent site of pilgrimage for architectural historians worldwide. However, Narkomfin has been in a state of dilapidation for several decades.

It is considered an iconic Moscow landmark despite its condition and has been under continual watch by city experts, being located in a prime real estate area on Novinsky Boulevard in Moscow's central district. But so far, there have been few steps to confront immediate concerns, despite acknowledgment.

Senatorov would like to spend some $12 million on the future renovation project, which he hopes to present to the Moscow government this week to be approved. "Restoration will be from $3,000 to $4,000 per square meter " Senatorov told The Moscow Times. "It is an estimate," he clarified in a follow-up e-mail when questioned about how he reached the figure.

His ideas involve restoring the building to its original function, but apartments will be bought rather than rented. But recent unapproved 'cosmetic' renovations, termed "temporary" by Senatorov, are prompting outrage from architectural experts.

"The situation is out of control," said Alexei Ginzburg, grandson of Narkomfin's architect Moisei Ginzburg by phone. "No one knows what is going on there."

Evidence of "repairs" are apparent upon setting foot inside the building. Since the beginning of the year, the first floor has been replaced with concrete, new window frames have been installed, and walls are being replastered. Bags of rubble are stacked up inside the building, and short-notice rent hikes are driving tenants out. 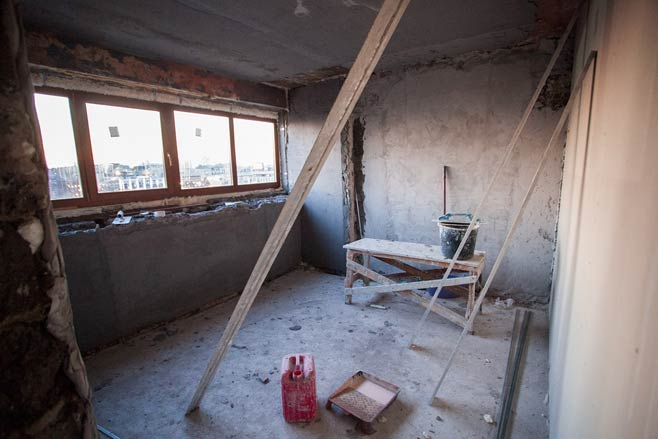 A glance inside the building reveals unauthorized modern renovations.

Ginzburg has not been consulted regarding any of the works. "I have to approve any project of restoration or renovation of the house," he said. "There is no restoration project approved and it is a crime," added Vassiliyev. Senatorov and Ginzburg suspended their communications more than five years ago over differences of opinion regarding Narkomfin's future.

Mosgornaslediye, the city department of cultural heritage, has not given its approval for any temporary restructuring taking place.

A concerned observer brought the building works to the attention of Mosgornaslediye and received the following reply in a letter, now published on Facebook: "Design documentation for review and approval has not been received by Mosgornaslediya, the permission to undertake works and any conclusions about the acceptability of the conversion of the interior and [or] nonresidential redevelopments has not been issued."

Senatorov stated that a young architect, formerly of Mosgornaslediye, Nikolai Pereslegin, would be involved in future works. "He is an architect of the restoration project," Senatorov stated.

However, Pereslegin denied any involvement with an impending project by phone, while adding that his students have been devising their own unspecified plans, but "that is all," he said.

Natalia Melikova, creator of the “The Constructivist Project,” which promotes the Russian avant-garde, has aired a great deal of skepticism over Senatorov’s actions.

"For some reason, he is keeping all the information closed up, probably so he can get all the work done quietly rather than have to explain it all and justify it," Melikova said in an interview at the end of March, before full details of "renovations" emerged. "The next step should be to have more discussion."

Melikova has avidly documented any piecemeal works taking place, and e-mailed her latest photographs of work on the building's penthouse to Ginzburg. "Looks like the beginning of the end of the house. It lasted a long time," was Ginzburg's mournful reply to her on Saturday. Melikova said that any current work taking place is "destructive."

Senatorov is retaining a pragmatic approach despite criticism. His long-term plans entail changing the engineering system, ventilation, soundproofing and heating, as well as building "three or four levels" of parking underground.

"We are going to work with one of the biggest companies in Moscow — PSP Farman," Senatorov said. "This company has a special department for restoration." PSP Farman did not respond to requests for comment. 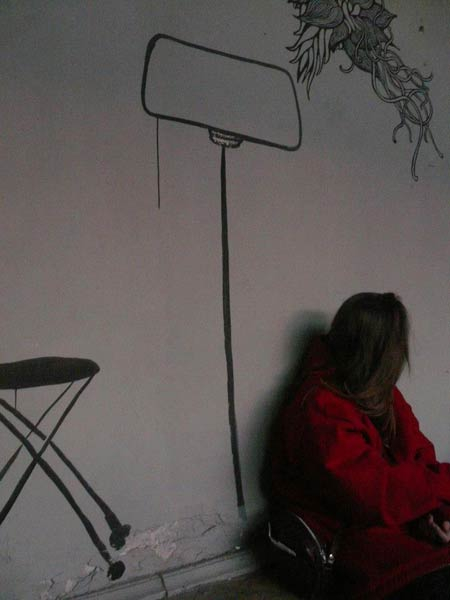 Many residents have repainted and repurposed their own apartments.

Senatorov owns all but five apartments in the building, but is clearly very keen to procure the remaining rooms to follow through with his vision. While appreciating tenants' aligned enthusiasm for Narkomfin, his long-term plans mean many will have to leave.

For those living in the building, the current situation is incredibly strenuous. One former resident who wished to remain anonymous was kept from renewing her contract "because the owner wants to conduct 'evroremont' [euro-standard repairs]," she told The Moscow Times in March.

Melikova's friends in the building have also been issued with warnings. "Their rent will be going up 50 percent, take it or move out. But so far they are still there," she said in March. However, on Monday they are expected to move.

As the building is residential, access to the individual spaces is restricted and the entrance flanked by guards, which is standard procedure in several apartment buildings in the city's central district. "It is not a public building … everybody wants to be safe," Senatorov said. However, this prevents any changes to residential apartments from being quickly recorded.

"All apartments have had various different owners since the turn of the century, but it is never documented," said Vassiliyev. Tenants have been relatively free in terms of how they paint the interiors; this time last year, the hallway of one was bright pink with the phrase "never forget the chaos" scrawled on the walls.

However, the extent to which Muscovites are concerned by the fate of constructivist masterpieces is also open to debate: "Usually, not much," said Melikova via Skype. "But you can see what has happened with the Shukhov tower," she said, noting the interest outside of Russia's borders.

The international interest is impossible to ignore: Narkomfin was included on the World Monuments Fund, or WMF, "watch list" for three cycles: 2002, 2004 and 2006.

Docomomo has aspirations to draw renewed attention to its plight on an international scale. However, it will not come without its problems. "We can apply for the World Heritage List — the UNESCO list — but it has to already have been preserved and restored. UNESCO does not list damaged things … that is the problem," said Vassiliyev.

Senatorov says that he will welcome any outside help with the project, but eventually, all must go ahead as planned. “I am ready to accept any help if they want to help us,” he said. “If you want to help us with advice, with money, with work, everything — everyone who wants to help, help! But we are owners, and we have to do the restoration. We can’t wait to see whether somebody will help us but if somebody wants to help us we are willing to accept it," said Senatorov.