When Sasha Gogolev began art therapy at Moscow's Krug center, he was uncommunicative, at times speaking hardly a word.

Now Sasha is not only talkative, but one of Krug's star performers, gracefully and confidently performing in one of the center's touring dance ensembles.

Krug, despite being founded before the Soviet Union's collapse in 1989, has long been at the forefront of innovative arts therapy programs, seeking not only to rehabilitate its students but to integrate them into the daily bustle of Moscow life.

By day the unassuming center, located in one of Moscow's distant bedroom communities, runs a multitude of arts programs for children and young adults with a wide range of mental and  physical disabilities. Every day mothers and the occasional father stream to the center, participating alongside their children in woodworking, dance, and folk games.

Unlike other programs, though, Krug uses the traditions of Russian folk culture, whose emphasis on group work, physical touch, and song often reach those with developmental issues better than more traditional pedagogy.

At night, a group of able-bodied and mentally disabled dancers collaborate to create droll yet deeply emotive dance-theater pieces that play in alternative spaces like the Fabrika theatre and within the halls of the Tretyakov gallery. Krug also tours internationally, performing in Spain, Ukraine, and Poland, in addition to hosting Proteatr, a festival that brings disabled theater groups from Spain to Uzbekistan to perform and take workshops in Moscow. 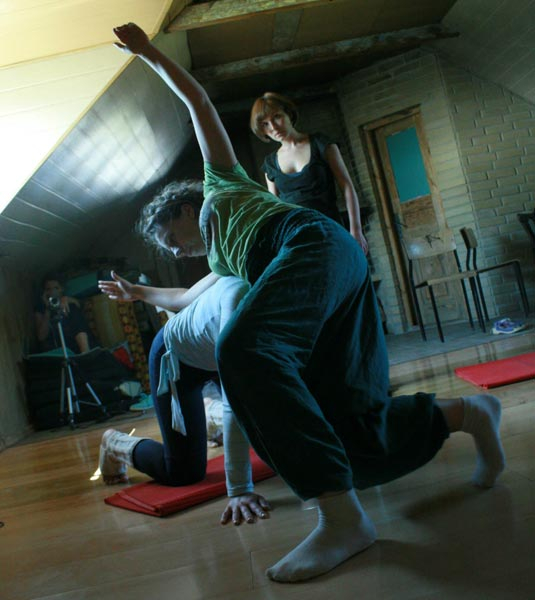 The dance group, like the daytime classes, seeks to give real responsibilities to those with disabilities. Natalya Popova, Krug's head and primary director, demands the same of members with disabilities as she does of able members, rehearsing and re-rehearsing until all members can perform the same physically demanding movements in-step. The group is evenly split between those with disabilities and those without, but, as member Nastya Pingacheva says, the pieces are  done so professionally that "no ones knows after our performances who in the show has disabilities, and who does not."

Krug's able-bodied performers embody this philosophy of integrated life. Many participate in Krug as meaningful activity outside the daily jobs. Mitry Grankov, Krug's resident musician, works as a designer, while Viktoriya Khrenova is an English and German translator for news agency Russia Today.

Some, like Pingacheva, a 4th year student at the Moscow State Psychology university, see working at Krug as being in line with their professional aims, although Pingacheva highlights that here "I work with a totally different instrument," focusing on motion and play rather than staid psychological treatments.

Krug's next performance, entitled "Slash" will be at the  at Otkrytaya Stsena on Monday and focuses on the theme of outsiders, a issue close to the heart of Krug's work.