A charity founded by Russian billionaire Oleg Deripaska has brought 10 stray dogs to the U.S. after they were rescued from the streets of Sochi.

The six female and four male pooches landed in Washington, D.C., and posed for photographers before being taken to the Washington Animal Rescue League to await their new homes. The charity said the presence of the celebrity Sochi animals will also help other pets in need of new owners.

"These can be international ambassadors, these Sochi dogs, for dogs and cats that need a second chance," Bob Ramin, the Washington rescue league's CEO, told NBC television on Thursday. "That's really going to be great, because people are going to come and want to see the Sochi animals, but we are going to say: 'Look at everybody else here that needs a home.'"

All dogs have been vaccinated and provided with international veterinary documents, the charity, Volnoye Delo, said in an e-mailed statement.

The charity's animal shelter in Sochi, PovoDog — a play on the Russian word "povodok," which means leash — has been rescuing stray dogs in the city where hundreds of animals have reportedly been killed as the local authorities tried to clear the streets ahead of the Winter Olympics.

"Thanks to the worldwide media attention to the problem of stray dogs in Sochi, PovoDog has received hundreds of adoption requests," Volnoye Delo head Tamara Rumyantseva said in a statement.

PovoDog said it has so far rescued more than 200 dogs from Sochi and has found new homes for 50 of them.

Moved by the sight of the pooches in Sochi and the dog's life they had led in the Olympic city, many athletes decided to take home some of the animals. 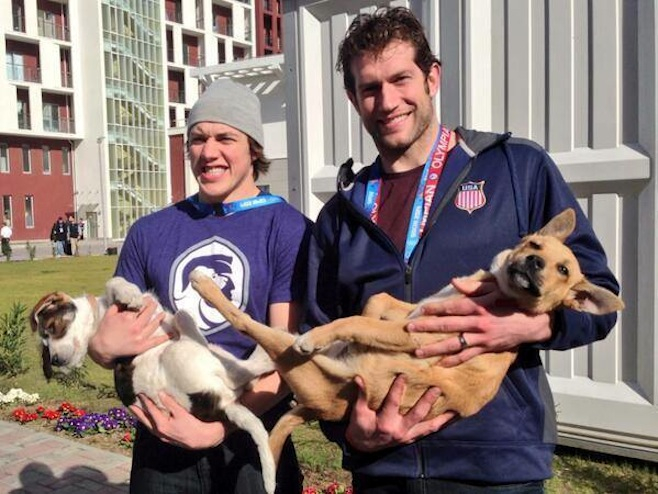 Hockey player Kelli Stack, whose team won the silver, has adopted a dog from a Sochi shelter and named her Shayba, after the hockey arena in Sochi, USA Today reported.

Communication Director of the U.S. bobsled and skeleton team, Amanda Bird and NBC runner Gabrielle Levesque adopted puppies from the shelter in February, PovoDog said in a statement.

Reports of the war on dogs in Sochi also sparked local initiatives, with volunteers from the Moscow region traveling to the Black Sea resort ahead of the Olympics and bringing home a dozen of strays with them in the back of an SUV.

Many of the rescued animals from PovoDog have been adopted closer to home.

Kelly O'Meara of the Washington, D.C.-based Humane Society International said that her group intended to continued "helping street dogs in Russia and around the world."

"Our goal is to protect street dogs from cruel and unnecessary killing programs — like the one employed by Sochi officials to 'clean up' in advance of the Olympics — by working with governments to create humane and effective dog population management programs," she said in a statement.

Deripaska, an aluminum magnate and one of the richest men in Russia, has said that he opened up the PovoDog shelter after being reminded of his first pet.

"My first dog I found in the street of my village, the tiny village [where I grew up]," Deripaska told the BBC last month. "It was a very close friend for almost five years."

Deripaska's company Basic Element has said it has invested more than $630 million in the renovation of Sochi's airport and a cargo port, Reuters reported, and the good-will gesture to save the dogs from destruction also helped to buoy Russia's image ahead of the Games.

The dogs that arrived in the U.S. on Thursday can be adopted through the Washington Animal Rescue League.

Rescuers Catch Condemned Sochi Dogs and Bring Them to Moscow

Increasing military activity in the area poses dangers not only for critical infrastructure, but also nuclear waste stored at the site.
shadowy target

The attack comes less than a week after a pro-Kremlin war correspondent disclosed the base's location on Telegram.