Have you noticed Moscow's looking a bit greener these days? Moscow Irish Week is currently underway, lasting from March 12 to 23, coinciding with St. Patrick's Day on March 17. The festival consists of more than 70 events celebrating Irish culture in Moscow, St. Petersburg, Yekaterinburg, Voronezh and Volgograd. Events are sponsored by the Irish Embassy, the Moscow City Government and other organizations, and most of the events are free of charge. Raffles and lotteries will also be held at the events, with chances to win a trip to Dublin.

Though Russia would probably not immediately spring to mind when thinking of St. Patrick's Day celebrations, Irish Week 2013 attracted more than 50,000 people in Moscow, eager for a taste of what the Emerald Isle has to offer. This year, it promises to be even bigger. Though only established in 2012, Irish Week was a merging of several existing events, such as the Irish film festival and the St. Patrick's Day Parade.

Many residents of Sokolniki in northern Moscow seemed surprised on Saturday as crowds of merry revelers descended on Sokolniki Park dressed in every shade of green imaginable for the St. Patrick's Day Parade. Irish and Russian flags fluttered side-by-side in the breeze as Irish culture enthusiasts and pleasantly surprised local residents alike enjoyed lively traditional music on a stage set up in the center of the park. St. Patrick himself greeted the crowds cheerily as Muscovites dressed in colorful costumes tried their hand at Irish dancing.

After the parade, guests who were hungry for more could enjoy a 14-hour marathon of Irish music and dance, St. Patrick's Day & Night, which took place in P!PL club and included headliners not only from Ireland, but also from Scotland, Ukraine, Belarus and Russia, including bagpiper Paddy Keenan and Grammy nominee Pat Killbride. Another event, the "Bards of Bedlam" pub tour includes a number of pubs in the city showcasing the best of traditional Irish music.

It is also an exciting time for movie buffs, as the Irish film festival kicks off. The festival is in its seventh year and with more than 40 screenings, there is something for everyone. Organizer Johnny O'Reilly, an Irish film director, told The Moscow Times that the festival displays the interest in Irish films in Russia, as it is the second-largest festival of its type in the city. 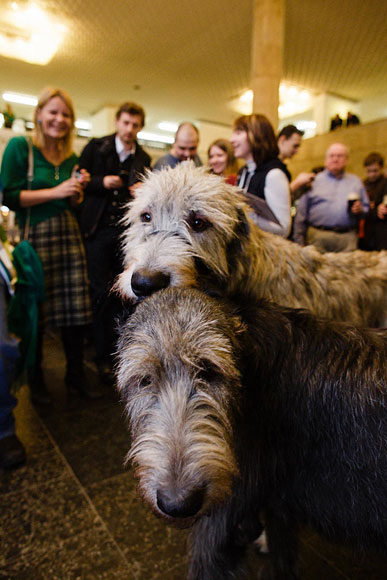 Irish Wolfhounds stole the show at the opening ceremony of Irish Week.

Held at the Gorizont cinema and TsDKh, the films shown fall into two categories — new Irish films and classic Irish films, such as "In the Name of the Father," which won two Oscars. Recent releases include "What Richard Did" and "The Stag," described as Ireland's version of "The Hangover." Hugh O'Connor, one of the stars of "The Stag," will conduct a Q&A session after the screening and other invited guests from Irish cinema will also talk about their work.

O'Reilly stresses the importance of film in developing cultural links between Ireland and Russia. His upcoming film, "Moscow Never Sleeps," is the first official Irish-Russian co-production since 1994 and is currently in post-production in Ireland. The film's trailer, which has been screening at the festival, already shows the fruits of this collaboration. He said that when choosing the films to be shown at the festival, the organizers tried to choose films that "reflect the unique talent of the filmmakers and also something interesting about Irish culture."

The Mic Fest, a festival of Irish stand-up comedy, forms an integral part of Irish Week and includes well-known Irish comedians Rory O'Hanlon, Aidan Bishop, David McSavage and Joe Rooney. But the star of this year's festival, and its headliner, is Dara O'Briain. O'Briain is one of Ireland's most-beloved comedians and a well-known figure on British television — he presented the wildly popular "Mock the Week," a topical celebrity panel show, and starred in BBC's "Three Men in a Boat."

Crowds thronged outside Moscow's Dom Kino on the evening of March 15. Obviously they had read the reviews of O'Briain's shows, which include "If you don't laugh at O'Briain's jokes, check your pulse — most likely you're dead." O'Briain told The Moscow Times that "Moscow is a city I have always wanted to visit, I have always wanted to see what's going on here." He certainly received a very warm welcome, the venue was packed, and a translation service was offered for audience members who might have found O'Briain's quickfire humor a bit hard to handle.

O'Briain told The Moscow Times that many of his fans had advised him against coming to Russia, given recent political events, but he said that for him, "it was never really an issue." He said "comedy points out the differences between people, and also the universal things that join us all together."

Irish Week illustrates that Moscow's Irish community, while small, certainly knows how to throw a party. The event continues to grow each year and illustrates the great interest that Russians have in Ireland, and also provides room for development for cultural links between the two countries. Ryanair should certainly have plenty of customers when it starts direct flights to Dublin from Moscow and St. Petersburg in June. Sláinte!