SIMFEROPOL, Ukraine — Residents of Crimea remained divided Monday about the outcome of a weekend referendum in which voters chose overwhelmingly to split from Ukraine and join Russia, even as government agencies in the regional capital quickly moved to re-register themselves as organs of an independent state that will soon become subject to the authority of the Kremlin.

Crimea authorities said Monday morning that more than 96 percent of voters chose to join Russia in Sunday's vote, and Moscow has signaled that it could begin annexing the Black Sea region in the coming weeks despite fierce objections by Kiev and Western powers. The U.S., the European Union and the central Ukrainian government did not recognize the vote.

The office of the permanent representative of the Ukrainian president in Simferopol was shut on Monday as Russian and Crimean flags waved above the old Ukrainian-language sign. The self-appointed militia that guards the entrance to the office, an imposing building with a tiled roof, said the premises were currently being used as storage "for important documents."

"Afterwards this will become the office of a representative of the Russian president," said Vladimir Khokhlov, 59, who emphasized that he is "only two years younger than Vladimir Putin."

On Sunday night, the central streets of Simferopol all turned into pedestrian areas, with swarms of people rambling around in euphoria. There were bands playing Russian rock songs, popular during the breakup of the Soviet Union. For a more traditional crowd, an official concert was organized on Lenin Square, where more formal Soviet songs played and the presence of many Russian singers and actors highlighted the deep cultural bond between Crimea and Russia.

At the same time, the patriotic frenzy excluded some of the dissenters, who can be found not only among minority Tatar communities but also among ethnic Russian residents of the peninsula.

Yelena Bogdanova, 52, did not join the post-referendum party. Instead, she woke up early on Monday and went to the Ukrainian military base in central Simferopol to support Ukrainian soldiers, blockaded by a handful of Russian troops outside.

"I have sent my children away from Crimea because I am afraid they will be forced to exchange their passports for Russian ones," she said with tears in her eyes.

A native of the Urals region of Russia who has lived most of her life in Crimea, Bogdanova said she was not against the referendum per se but that it was conducted in "an unfair, illegal and impulsive way that distorted the real outcome."

"There was no reason for us to join Russia, we were not threatened by anybody, this is all plain propaganda," she said, admitting at the same time that her views were marginal in Crimea, where the majority is ardently pro-Russian. 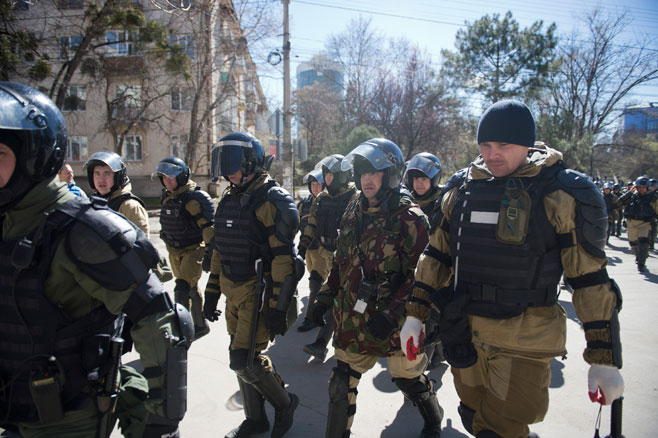 Members of the local pro-Russian self-defense unit patrol the streets of Simferopol, Crimea, on Monday.

"The Tatars have their own organization that unites them, while Russians and Ukrainians who are against this reckless scheme have nothing that unites us at all," Bogdanova said.

For government agencies in Crimea, the referendum result sparked immediate action. On Monday many of the agency offices resembled anthills, with throngs of officials running up and down the stairs.

At the office of the local railway directorate, which has its central office in the eastern Ukrainian town of Dnipropetrovsk, an official who presented himself as deputy head of the directorate said: "We no longer have to be subordinate to any authorities in Ukraine."

The official refused to give his last name, saying that he did not know what exactly would happen with the railway.

There are more than 20 trains with services from Simferopol to destinations in Russia, Belarus and Ukraine. The Dnipropetrovsk office of the railway has turned to Ukraine's prosecutor-general asking to investigate the "violent capture" of the Crimean railway.

The head of Crimea's new Justice Ministry refused to give an interview, citing a tight schedule. Irina Filatova, the head of a department at the ministry, said "the ministry has nothing to do with Ukraine anymore."

"Everything has to be re-registered now, so we have very little time for you," Filatova said.

The receptionist at the ministry's building, which was still full of Ukrainian signs, was the only one who had time to talk. He demonstrated the new background picture on his phone — a Russian flag with a double-headed eagle — and said he wondered how much cellular networks charge their clients in Russia.

The government agencies are apparently in a rush to act partly because many residents of Crimea who supported joining Russia say they expect big changes in their lives soon. People in front of Crimea's supreme council building cited low fuel prices, higher pensions and better maternity benefits among the advantages they expect.

"What I expect the most is that we will become one unified space with Russia, with its language and culture," said Anatoly Kolesnikov, 61. "I was born in Crimea and have lived here my whole life. We have never considered Kiev our capital."

"Moscow is our motherland!" he said proudly.