It seems that every country has some form of musical contest show: American Idol, X Factor, Pop Idol, and The Voice have spawned a variety of remakes and franchises across the globe, and it seems that no one can get enough of amateurs belting out pop hits for the judgement of critics.

Started in 2012, Russia's own franchise of "The Voice" has gone with the general trend and become one of the most popular programs on television. The Moscow Times spoke to Sergei Zhilin, the show's orchestra conductor, about the reasons for the show's success

Though purchasing the license to The Voice required a significant investment from Channel One, the risk was minimal, in part due to the show's consistent record of success in other countries, and an already extant music team ready to take on the project.

According to Sergei Zhilin, "Phonograph.Sympho.Jazz" orchestra conductor and pianist, the music team of Channel One have been working closely together since 2008 and were prepared. Together, they have done three more successful shows: "The Republic's Achievements" (Dostoyaniye Respubliki), "Two Stars" (Dve Zvezdy) and "One On One." 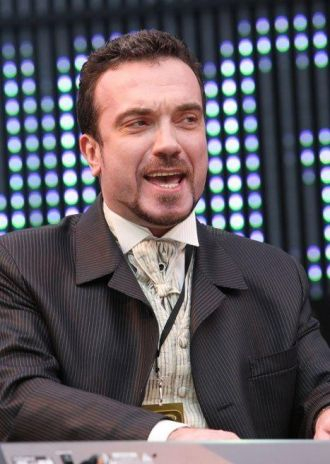 Yury Aksyuta, head of Channel One's music department, took the lead in putting the show together, demanding high standards from his staff. Sometimes, as former trumpeter of Phonograph.Sympho.Jazz, Aik Grigoryan, confessed, the shoots took 16 hours, but the emotions and pleasure from working with creative people always made it rewarding.

Aksyuta was not available for comment, as he was occupied with work at the Sochi Olympics. But Sergei Zhilin considers his skill at organizing and controlling large masses of people on a busy television set to be "exceptional." Zhilin says that one of Aksyuta's best management quirks is that when everything goes smoothly, the whole team shares the success and receives congratulations, but if the show is a failure, then Aksyuta places the blame solely on himself.

Asked about his favorite performances during the second season of The Voice, Zhilin made an unexpected choice. Unlike the youth audience of Channel One, he did not mention "Hit The Road Jack" by Anton Belyayev and Alyona Toimintseva. His favorite composition was "Tell Him" by Polina Konkina and Gela Guralia.

Zhilin is very committed to his musicians, who are mainly classically trained professionals stepping into the pop scene for the first time, and is impressed by their abilities. For a composition of two or four minutes, his orchestra musicians need only 30 minutes to rehearse and perform well.

The Russian version of "The Voice" consistently had an audience of more than 30 percent of all Russian television viewers, and reached a peak of 60 percent, which is the record high in the history of Russian television. 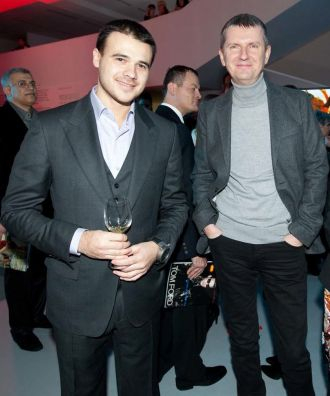 Yury Aksyuta, right, with pop star Emin Agalarov, who sang on The Voice.

One factor in the show's success was their close adherence to the model set by other international versions of the voice. The show retained the same four stages of competition: producers' auditions, blind auditions, battle phase and live shows. Likewise, the show tried to pick analogous celebrities for each of the show's judges, using Pelageya as Kylie Minogue, Dima Bilan as Marvin Humes, Alexander Gradsky as Sir Tom Jones, and Leonid Agutin as will.i.am.

A strong group of professional singers was the final factor. The Moscow Times spoke to Anzhelika Alfyorova-Arutyunyan, the music producer of "Jazz Parking," who provided 26 vocalists for The Voice, including three finalists, Anastasia Spiridonova, Margarita Pozoyan and Tina Kuznetsova.

Alfyorova-Arutyunyan described how her company had previously organized concerts by vocalists like these that were available mainly to people in the Moscow area willing to pay a couple thousand rubles for a ticket, saying that the music industry had been revolutionized by shows like The Voice.

"The Voice, being transmitted throughout the country to an audience of 145 million people, turned Russian pop culture upside down — 'voiceless' pop stars are no longer interesting to people," she said.

All of the graduates of the program have had great success in getting contracts and concert revenues. Nodar Revia and Sergei Volchkov have both done very well, while Anton Belyayev's rates have gone up after only two good performances. Alyona Toimintseva, who was before known only to music professionals, now can easily fill a hall with 250 listeners paying for tickets costing 1,000 rubles ($29).