"Hamlet/Collage" at the Theater of Nations is, without question, one of the biggest events — though not achievements — of this theater season.

It unites famed Canadian director Robert Lepage with popular Russian actor Yevgeny Mironov in a work that establishes new heights for technical prowess on the Russian stage. There is no underestimating what Lepage and designer Carl Fillion accomplished with their set. It is stunning, it is highly complex and it works like a Swiss watch.

We get a fuller picture of just how complex it is during the curtain calls when, for what is essentially a one-man show, 14 people emerge to take bows.

"Hamlet/Collage" is gorgeous to look at. Fillion suspended a huge, open-sided cube from the flies that spins as Mironov, playing all the characters himself, deftly walks, runs, leaps and reposes on its walls, floors and ceilings. A few apertures — doors and window — snap open and closed and allow Mironov to escape quickly and return again seconds later in completely new guises. He is aided in this by actor Vladimir Malyugin, who is the star's body double for many of the quicker, more complex changeovers.

Fillion's cube transforms into anything Lepage desires by way of Lionel Arnould's extremely precise video projections. The cube is first a cell in an insane asylum, where Mironov cowers in the corner in his straight jacket. But soon it mutates into a countless number of other locales — a library interior, a living room, a palace hall and a grassy meadow, to name just a few.

Essentially, Lepage gives life to a dream state. This is a world of mutations and metamorphoses that defy logic and the laws of physics. The soundtrack by Josue Beaucage straddles the line between eeriness and dreaminess. 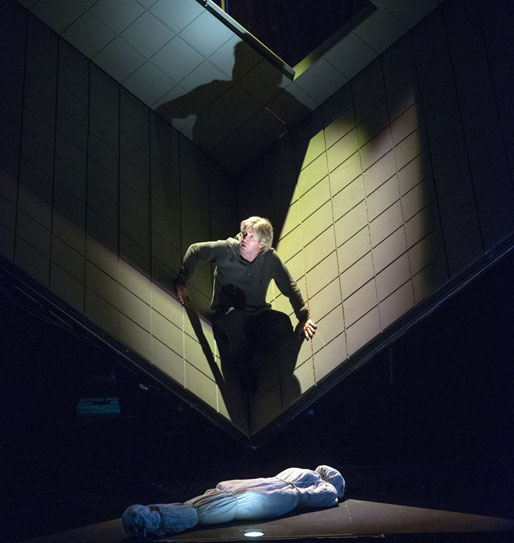 But this visually impressive work falters once we move away from technology into the realm of characterization and story.

Lepage cut Shakespeare's text up aggressively. That is no surprise in itself, for nobody plays the Bard uncut anymore. But in this piece, with one man racing to and fro as everybody in the play, we lose the thread of the tale. There are no relationships, merely one-sided stories or static visual tableaux of famous scenes.

The funniest of them posits Polonius as a kind of security guard keeping track of people on a series of surveillance screens. The most beautiful scene, hands down, depicts Ophelia sinking into a meadow pond and then twisting and turning as she drowns in churning, bubbling waters.

I mention these two incidents specifically because, beyond them, there are precious few that actually do more than illustrate. Yes, Hamlet holding an X-ray of Yorick's skull up to light gets a laugh, but, like many of the scenes, it is basically a cute joke that tells us nothing new about Shakespeare's play.

Moreover, that most horrible enemy of theater — tedium — sets in with a vengeance as the evening draws on — it runs nearly three hours without a break. The low-key music acquires soporific powers and the lack of a narrative thread deprives the performance of direction and dynamics.

What happens sooner than later is that "Hamlet/Collage" turns into an almost pointless and very long installation of visual images.

I don't doubt that the "installation" quality was intended. Mironov's ill-fitting wigs and often bulky costumes were surely designed by Francois St-Auban to highlight the fact that we are not looking at real people, but rather that we are watching an actor play these characters. This, in other words, is theater. It is fake. It is imagined. I get that. But even an exhibit of paintings in a museum takes us somewhere — if it's a good one, anyway.

"Hamlet/Collage" takes a long time in performing, but it goes nowhere after the first 15 minutes. Like that beautiful cube hanging over the stage, it spins in place, rarely challenging us to see anything new or discover what heretofore we had not imagined.

Technically speaking, this is a huge step forward for theater in Moscow. I've never seen anything here with the sophistication and intricacy of this set.

In terms of theatrical impact, "Hamlet/Collage" falls significantly short of work Lepage has brought us from Canada in the past.