The Fisht stadium is the biggest Olympic venue. It can fit 40,000 people and will be used to hold the opening and closing ceremonies of both the Olympics and Paralympics. Some medal ceremonies will also take place here. The stadium is built in such a way that people in the stands will be able to see the staged show and, at the same time, the mountain peaks and nearby sea. Fisht will be used as a multifunction sports and entertainment center after the Games, and as a football stadium during the 2018 World Cup.

Shayba is the second, smaller, ice hockey venue. It will also be used for all the ice-sledge hockey matches during the Paralympics. The arena fits 7,000 spectators and was constructed as a temporary venue that can be dismantled and moved to another city after the Winter Games. Its name comes from the popular Soviet and Russian chant, "Shaybu! Shaybu!" that is meant to encourage the local team and inspire them to score.

Bolshoi will be the main ice hockey venue during the Winter Games, hosting the gold and silver medal matches, among others. The name, translated as "large" in English, highlights the grand size of the 12,000-capacity venue and Russia in general. The name also draws associations to the legendary Bolshoi Theater in Moscow. From a bird's eye view, the ice dome is meant to look like a frozen drop of water. It will be used as a multifunctional sports and entertainment complex after the Olympics.

The 3,000-seat center will host curling and wheelchair-curling competitions from February through March. It has a simple and modern architectural design and can be dismantled after the Games for similar use in another Russian city.

One of the Olympics' busier venues, Adler Arena is scheduled to host the popular figure skating and speed skating competitions. The name derives from the Sochi district in which the coastal cluster is located and is meant to have an international sound. Adler Arena can fit 12,000 people and is one of the venues that is expected to be dismantled and moved to another city after the Games.

Speed skating competitions will take place at the Iceberg during the Winter Games. The oval stadium has three lanes in total, two for racing and one for training purposes. The venue can fit 8,000 viewers and will be transformed into a retail and exhibition center in time for Sochi to greet political and business guests during the G8 summit. 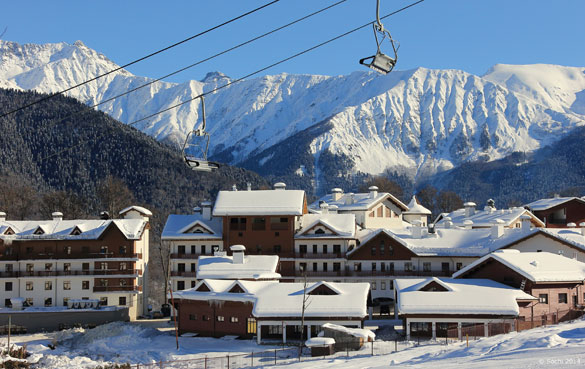 According to local legend, Laura River was named after a young woman who plunged into the watery depths to avoid a loveless marriage. The river is very turbulent and has many waterfalls, much like the wild character of its namesake. The nearby Laura Cross-Country Ski & Biathlon Center also promises to live up to these characteristics. The complex includes challenging, winding tracks for the biathlon and skiing competitions that will take place here during the Olympics and Paralympics. Each of the two venues is able to fit up to 7,500 spectators.

Set on the ridge of the Aibga mountain, the Rosa Khutor Alpine Center challenges athletes to tackle 20 kilometers worth of difficult ski runs to get to the podium. The center will be used for different alpine skiing events during the Olympics and Paralympics and can accommodate 7,500 spectators. The ski runs will be open to the public after the Games as part of the Krasnaya Polyana ski resort.

Foreigners will associate the name Russkie Gorki, or Russian Mountains in English, with the breath-catching roller coasters found in large amusement parks. Sochi gives the name another reincarnation as a ski jumping and Nordic combined venue. The jumping center is located on the Aibga mountain ridge and is naturally sheltered from side winds. It can fit 7,500 people and will be used as a training base after the Winter Games.

The Sanki Sliding Center serves triple duty as a bobsleigh, luge and skeleton venue. State-of-the-art technology keeps the temperature on the track in check so that the 5,000 viewers in the stands can see the fastest races possible. Sanki translates as "sleigh" in English, bringing attention to the winter activity that multiple generations of Russians have enjoyed going back to the times of Peter the Great. The sliding center will be used for training after the Games.

Freestyle skiing and snowboard competitions will be held at the Rosa Khutor Extreme Park in February. The freestyle center can fit 4,000 spectators while the snowboard park has space for 6,250 sports fans. Both venues will be used as training facilities later to help cultivate a new generation of world-class athletes.