KIEV — Ukrainian President Viktor Yanukovych on Thursday called for an emergency session of parliament to end a political crisis that has sparked violent protests, in a sign he might be ready to soften his hardline stance and strike a compromise with the opposition.

Yanukovych was due to hold talks with opposition leaders, including heavyweight boxer-turned-politician Vitali Klitschko, and anti-government demonstrators in the capital agreed to a truce with police until 8 p.m., pending the outcome.

The parliamentary website said the special session would be held Tuesday.

Underlining the level of mistrust between the government and opposition, Prime Minister Mykola Azarov accused protesters of trying to stage a coup d'etat, and dismissed the possibility of an early presidential election to resolve the standoff.

"All those who support this coup should say clearly, 'Yes, we are for the overthrow of the legitimate authorities in Ukraine', and not hide behind peaceful protesters," Azarov said on the sidelines of the World Economic Forum in Davos, Switzerland.

"A genuine attempt at a coup d'etat is being carried out," he said, Interfax reported.

The protests against Yanukovych began in November, when he pulled out of signing a free-trade deal with the European Union in favor of closer economic ties with former Soviet overlord Russia.

The unrest has swelled in scale in recent weeks, and turned violent on Sunday when hardcore radicals broke away from the main protest area in the capital Kiev and clashed violently with riot police. 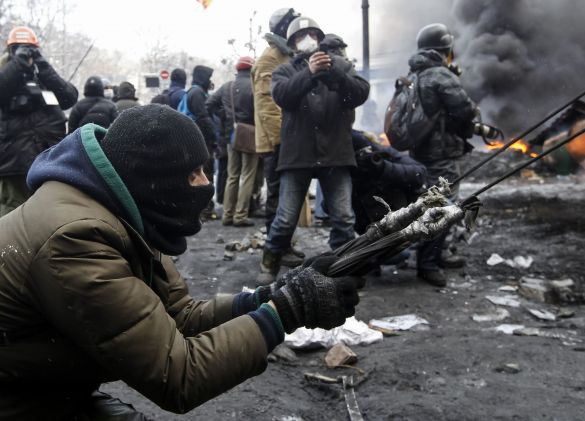 A protester preparing to hurl a rock at police with an improvised slingshot.

Three people have been killed on the side of protesters — two of them from gunshot wounds — and more than 150 police have been injured in the worst street violence in post-war Kiev.

"Without the help, without the cooperation of authoritative representatives of our two countries this [situation] could lead to catastrophe," Gorbachev, who has Ukrainian heritage, said in an open letter posted on his foundation's website.

"I ask you to seize the opportunity and take a decisive step to help Ukraine return to the path of peaceful development. I am really relying on you," he said. "The opposing sides should sit at the negotiation table."

His call for further talks in Ukraine echoed the view of current leaders such as German Chancellor Angela Merkel, who expressed outrage on Thursday over Ukraine's crackdown on the protesters and said the focus must be on de-escalation and dialogue.

"We are greatly worried, and not only worried, but also outraged at the way laws have been pushed through that call these freedoms into question," she told a news conference.

But Merkel added that it would be wrong for Europe to respond to the violence with sanctions at this stage.

A European Commission spokesman said Yanukovych had spoken to President Jose Manuel Barroso on Thursday and assured him he was ready to maintain political dialogue and saw no need to impose a state of emergency in Ukraine.

In what could constitute the first signs of a willingness to compromise, Yanukovych told parliamentary speaker Volodymyr Rybak that the "situation must be settled immediately."

Rybak said the proposed emergency session of parliament could consider the opposition's call for Azarov's government to step down.

Rybak added that "questions linked to laws passed by parliament" could be discussed — apparently a reference to sweeping anti-protest laws rammed through parliament last week by Yanukovych loyalists.

Those laws served to boost mass demonstrations on the streets of Kiev at the weekend, and the opposition is demanding they be repealed.