Amid heightened concerns about security at the upcoming Sochi Winter Games, Russia has introduced extensive safeguards that observers say are close to those imposed in a state of emergency. But some countries' teams will be providing their athletes with even more security, worrying that the level of danger in Sochi is higher than at any previous Olympics.

Some 2,000 athletes will participate in the Games, and about 213,000 visitors are expected to come to Sochi, which borders Russia's turbulent North Caucasus republics. The Games will be held in the wake of two recent suicide bombings that killed 34 people in Volgograd, 700 kilometers north of Sochi.

Many nations said that while they were concerned about the Volgograd attacks, they would primarily count on the Russian authorities to provide security during the Games. Part of the U.S. team, however, has hired a private security firm for its athletes, while the U.S. government has sent FBI agents to Sochi and Moscow for the duration of Games and made air and naval assets available to help Russia prevent possible terror attacks.

Several groups have threatened to attack the Sochi Olympics, the latest being a group that calls itself Vilayat Dagestan, which also claimed responsibility for the Volgograd bombings. They said the attacks were ordered by rebel leader Doku Umarov, who has also threatened to strike Sochi during the Olympics.

In response to the possible threats, the U.S. ski and snowboard team has hired private security firm Global Rescue to protect its athletes in case of emergency. Global Rescue head Daniel Richards said Sochi was a unique environment with challenges that his firm had not experienced at the Winter Olympics in Turin, Italy, in 2006 or Vancouver, Canada, in 2010, when its security agents also worked for the U.S. team.

For the Sochi Games, the firm will have five aircraft on standby to assist the team in case an emergency requires an evacuation. Richards said it would be one of the firm's larger deployments for the U.S. Ski and Snowboard Association given the scale and the location. "Our planning with them began months ago," he said by e-mail.

Global Rescue is also providing athletes with guidelines to minimize the possibility that they would become targets and develop protocols and strategies they can use to deal with events that might occur while they are in Sochi. He said his firm's team would work with Russian state agencies as necessary.

Britain has also said it will provide additional security to its Olympic team by sending security staff to Sochi as part of its delegation, but said the move is not related to last month's attacks in Volgograd. 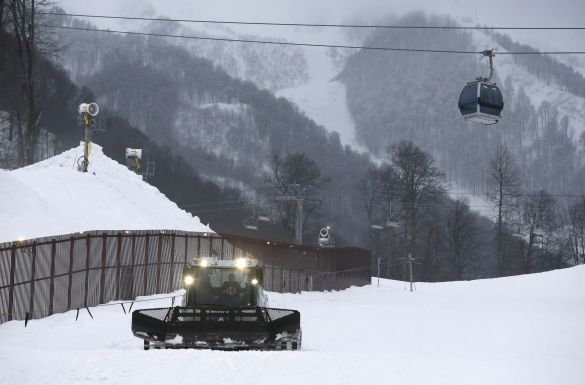 A ski lift operating at a Sochi venue.

"We will rely primarily on the security provided by the Games Organizing Committee and the host country," the British Olympic Association said in a statement following the Volgograd bombings. "As with previous Olympic Games, we will have security personnel as part of our delegation. That has been in our planning all along."

The statement said that in the interests of secrecy, neither the exact number of security personnel nor where those individuals will be based would be disclosed.

Russia's security services are taking what some observers say are unprecedented measures to provide sufficient protection from would-be attackers.

Some 40,000 police officers will be used to provide security during the Olympics, and Russia's 58th Army unit, which is composed of about 70,000 soldiers, will patrol Russia's nearby southern border with Georgia.

"Security is to be ensured by some 40,000 law enforcement and special services officers," President Vladimir Putin said in an interview with foreign media on Sunday. "We will protect our air and sea space, as well as the mountain cluster. I hope things will be organized in such a way that they do not catch the eye and will not, so to say, depress the participants in the Olympic Games."

Some nations, even those that have experienced tragedy at past Olympics, say that they consider these measures sufficient and that they will not be sending additional security for their teams.

Israel, which saw 11 of its Olympic team members taken hostage and later killed by Palestinian terrorists at the 1972 Summer Games in Munich, is among them. Vladimir Shklyar, head of the Israeli delegation to the Sochi Olympics, said by phone that Israel was confident that Russian security agencies would do their job properly and that the Games would be safe.

A spokesman for the German Olympic Sports Federation said Germany also trusted Russian authorities to provide excellent security in Sochi. "But we will look closely with our German national security authorities on the situation in Sochi, because in the modern world you can never be 100 percent confident that there will be no emergency situations," he said.

The spokesman said he could not reveal whether German security officials would be a part of the German delegation or would observe the situation from Germany. When asked whether the team would use the services of a private security firm like Global Rescue, he said: "We will have no aircraft, that is all that I can say."

A representative for the Dutch Olympic Committee said he could not comment on whether the Netherlands would take any additional security measures but said: "We take security seriously, just like the authorities in Sochi."

From Sweden, only one special pair could demand a security detail — and it is not the star athletes from their cross-country skiing squad.

"We rely on the host country's authorities — only the king and queen can get additional security personnel," said a spokesman for the Swedish Olympic Committee.