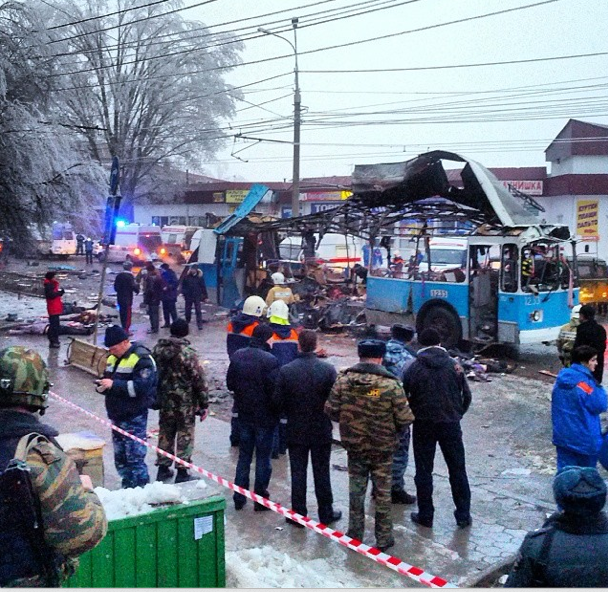 Rescue workers standing at the site of the bomb explosion in Volgograd. ( Instagram / @ulianov24)

At least 15 people were killed and dozens of others were injured in an explosion on a trolleybus in Volgograd on Monday, the second bombing in as many days in the southern city.

The blast, which turned much of the trolleybus into a charred skeleton, came a day after at least 17 people were killed in a suicide bomber attack at Volgograd's main railway station.

Volgograd Deputy Governor Vasily Galushkin said the explosion killed 15 people and wounded 23 others, including a one-year-old baby, a death toll that was confirmed by the Emergency Situations Ministry on Tuesday.

The Monday explosion ripped through the crowded trolleybus as it was approaching an outdoor market during the morning rush hour, wiping out the middle section of the streetcar and knocking out windows in nearby buildings. Many of the passengers were people headed to work and students on their way to college, officials said.

"A lot of people were going to work at that time," a spokesman for an emergency anti-terrorism task-force said, Interfax reported. "The trolleybus has been literally blown into bits, there are very many fragments of human bodies. Five of the dead are lying in the bus, there are a lot of remains of human bodies."

Health Minister Veronika Skvortsova said many of the wounded were in critical condition.

"All the patients are in serious condition. There are burns, multiple wounds, explosive injuries," she told Rossia 24 television.

As the news of the latest bombing spread, many people began getting off buses and trolleybuses, deciding to walk to work for fear of yet another attack.

"It's frightening," a local man, Sergei Stukalov said, RIA Novosti reported. "Everybody has left buses and trams and started to walk."

"Many people aren't taking public transportation, they are walking," he said.

The suspected terrorist attack follows the Sunday suicide bombing at a train station packed with New Year's travelers, and an earlier explosion on a Volgograd public bus in October, when a 30-year-old female suicide bomber killed 18 people and injured many others.

The series of attacks sent shock waves through the city and raised new security fears six weeks before the start of the Winter Olympic Games in Sochi, 700 kilometers away.

The attacks may be the work of a large terrorist cell operating in Volgograd, a major transportation hub in southern Russia, a law-enforcement official said.

Trains from the Volgograd rail station depart for Moscow, St. Petersburg and other major cities, but it appeared "unlikely" that a terrorist bomber carrying a load of explosives would "dare a long trip on a train or bus," the official said.

Apparently seeking to reassure the region's population, Volgograd Governor Sergei Bozhenov took to the airwaves to announce that his administration was beefing up security, including increased patrols by auxiliary police force volunteers and intensified inspections of suspicious-looking people and bags.

Bozhenov on Monday declared a five-day period of mourning for the dozens of people who were killed in the two bombing attacks in the city over the past two days.

The mourning period began on Monday and will continue through Jan. 3, Bozhenov told reporters at the site of the Monday trolleybus explosion, Interfax reported.

Sunday's explosion at the Volgograd train station rocked a crowded area between the station's front doors and the metal detectors leading into the main hall in the early afternoon. The central hall was filled with holiday passengers and especially crowded because several trains were running behind schedule.

Kazbek Farniyev, an adviser to Volgograd's governor said on Sunday that the city was "in a panic."

"Only two months have passed, and again we have a terrorist attack," Farniyev said on Dozhd private television.

Investigators initially reported Sunday's attacker was Oksana Aslanova, a friend of the October suicide bomber, Naida Asiyalova. Recent reports however, point towards a male suspect with a Slavic appearance.

This is the first time the U.S. company has been penalized for breaching a controversial law requiring the data of Russian users to be stored inside Russia...
TEAM ROC

Why Russia Can’t Compete in the Tokyo Olympics, But Its Athletes Can

The country’s flag and anthem are banned from arenas and kits because of a long-running doping scandal.
DEATH TOLL

The past day saw 799 pandemic-related fatalities.