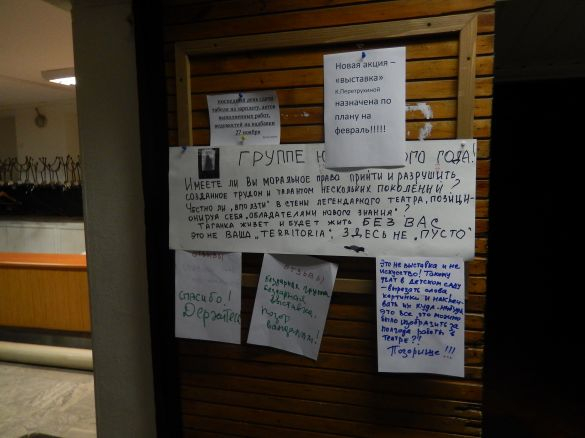 Two of Moscow's most famous theaters have been rocking and rolling to scandalous events all week long. The Taganka Theater, a true lightning rod for controversy over its 50-year history, and the Moscow Art Theater, usually, though not always, a bit more sedate throughout its 105 years, have been splattered all over the news seven days running.

The D-Day for the onslaught was Tuesday, Nov. 26, when an exhibit honoring the Taganka's 50th anniversary was unveiled, and the first of several previews of Konstantin Bogomolov's production, "The Karamazovs," opened at the Art Theater. Both events blew sky-high, with some Taganka actors demanding the removal of the exhibit, while reports emerging from the Art Theater had "The Karamazovs" being closed down even before it opened.

A lot has happened since then and some of the pieces that seemed blown to smithereens have miraculously fallen back into place. But let's walk through this step-by-step. 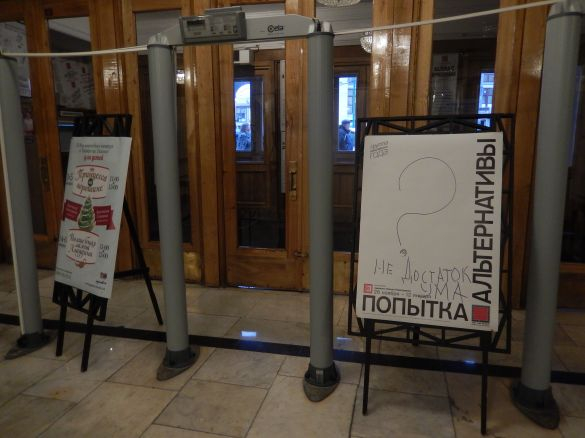 Someone scribbled "Insufficient intelligence" on a poster for the "An Attempt at an Alternative" exhibit at the Taganka Theater.

Bogomolov, distressed that artistic director Oleg Tabakov required changes in "The Karamazovs" quit the Art Theater on Nov. 25. That's a fact. He handed in his resignation and Tabakov accepted it. Before the dust settled, however, it was announced that "The Karamazovs" would not be pulled from repertory as was originally thought. Moreover, within a few days Bogomolov, through Facebook and various news agencies, declared there had been no censorship and that, wonder of wonders, he wanted his job back.

As of Sunday I saw no official response to that but it is hard to believe that the Art Theater, which has very much become a commercial playhouse in the Tabakov era, would turn its back on a director who is so good at putting bodies in seats.

Incidentally or not, Bogomolov's ability to attract spectators and attention was proved again on Thursday during a performance of his staging of "An Ideal Husband." As a cross bearing a nude actress hung in mid-air over the stage, two Orthodox Church activists ran on stage shouting denouncements of the production and exhorting those in earshot to consider the purity of the church and its faith. 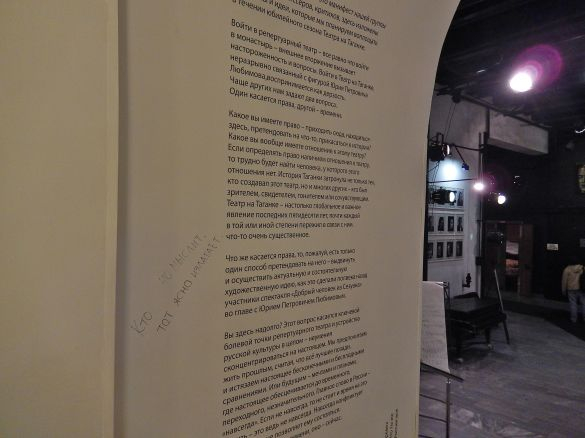 One of the many exhibit texts written on the walls of the Taganka Theater.

The protesters, led by Dmitry Tsorionov who goes by the name of Enteo, were finally subdued and led offstage by two theater administrators. The police showed up 20 minutes later, by which time, as actor Valery Troshin told Provoslavie i Mir, Enteo reportedly was seen giving an interview to a camera belonging to the NTV network.

Almost as if they are being tipped off by someone, NTV cameramen are always present at religious protests of theater performances. They were with Enteo last year at Teatr.doc when he attempted to interrupt a theatricalized evening devoted to the Pussy Riot case, and they were present earlier this year when Orthodox protesters, dressed as Cossacks, temporarily stopped a theatrical performance at the Sakharov Center.

Whether or not protesters will now take aim at "The Karamazovs" remains to be seen. Like "An Ideal Husband," the production is a kitschy, inventive, radical adaptation of a classical literary work that strives to achieve a maximum of political satire. In any case, an hour before the protest against "An Ideal Husband" took place at the Art Theater, Bogomolov talked about God, Fyodor Dostoevsky and "The Brothers Karamazov" on the Kultura television channel's Glavnaya Rol (Lead Role) program.

"As strange as it may seem, it is in part a rather religious production," Bogomolov said about "The Karamazovs." "Dealing with Fyodor Mikhailovich you can't distance yourself from that."

Meanwhile, the controversy over the 50th anniversary exhibit at the Taganka Theater continues to fester.

On Thursday a Facebook page entitled Taganka Theater Labor Union was opened. It posted videos of a press conference held the previous day, as well as an address to the press signed by actor Ivan Ryzhikov. Here one can read and listen to claims that the anniversary exhibit is an "act of vandalism in regards to the theater's anniversary and history" and that the Moscow Culture Committee's plans to turn the theater into a "Center of Creative Heritage" is part of an "attempt to destroy the repertory theater as a serious, professional manifestation of our national culture." 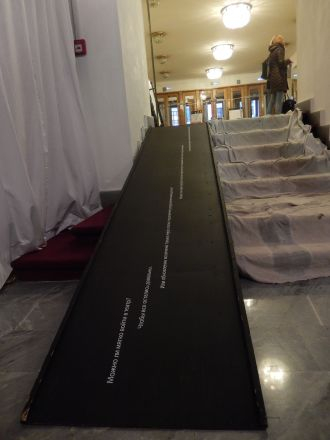 On Friday, Moscow Culture Committee Director Sergei Kapkov flatly stated during an interview on Echo Moskvy radio that the anniversary celebrations will go on as planned.

The spark that lit this fire was a simple exhibit, "An Attempt at an Alternative," mounted by designer Ksenia Petetrukhina while the theater's foyer undergoes renovations. In place of posters, photos and sculptures that hung on walls telling the theater's history, Peretrukhina posted texts that asked questions about the past and the future of the theater.

One text that seems to have had presentiments about the looming protest, provocatively asks, "What right do you have to come here, to be here, to lay claims to something, to touch history? What is your relationship to this theater? If we define the right as having a relationship to the theater, it would be hard to find any person who did not have such a relationship. The history of the Taganka touched not only those who founded this theater, but many others who were spectators, witnesses, persecutors or sympathizers."

The texts are laconic, clear and thought-provoking. So provoking, in fact, that at least one dissenting actor scribbled derisive responses alongside the texts. "Here I tired of reading you. Too wordy," someone wrote in felt pen beneath one text. "Not one new thought," is scribbled in the same handwriting elsewhere. A huge question mark followed by the words "Insufficient intelligence" were scribbled on one of the posters announcing the exhibit.

The idea, hatched by Sergei Kapkov and the Moscow Culture Committee, was that it made sense to bring a young team, the Anniversary Year Group, into the Taganka to create events reflecting upon the theater's place in history after a half century. Following the resignation of founding director Yury Lyubimov two years ago due to a bitter conflict with the actors, the famed playhouse has been virtually rudderless. It was run with questionable success for one and a half seasons by actor Valery Zolotukhin who resigned as artistic director this spring one month before his death. 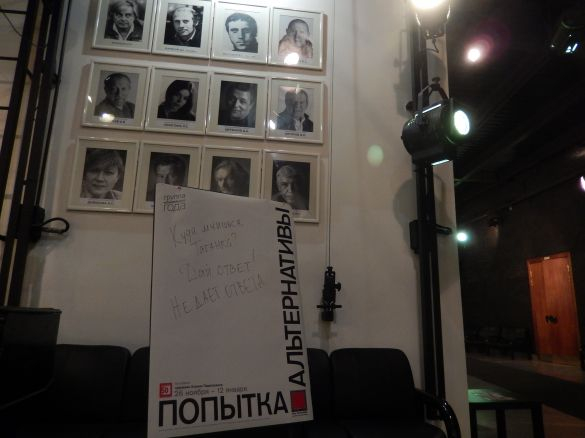 Graffiti on a poster for the "An Attempt at an Alternative" exhibition rephrases the end of Nikolai Gogol's novel "Dead Souls": "Where are you racing, to, Taganka? Give us an answer! It gives no answer."

To make things worse for the theater, Yury Lyubimov this summer was able to force the theater to close down all of his productions that were remaining in repertory. That left the great and famous theater with just a few shows running. Several new shows created by the young Anniversary Year Group begin opening this month, starting Friday with "The Rehearsal of an Orchestra," a documentary play about the state of the Taganka Theater today.

Kapkov, in his interview with Echo Moskvy, brought up the paradox that the actors who are claiming vandalism now in regards to the theater founded in 1964 by Yury Lyubimov, are the same actors who essentially drove Lyubimov out in July 2011.

"Which theater must be preserved?" Kapkov asked rhetorically. "The legendary stage is preserved as it is. And it will be preserved. The theater of Lyubimov, Lyubimov's Taganka does not exist. Does Zolotukhin's Taganka exist? It doesn't exist either."

Ten top dancers at the Bolshoi Theater have been suspended for a month after performing at a gala in Uzbekistan, Russian media reported this week. The...
Autumn in Venice

Syrniki are thick curd cheese “pancakes” that everyone knows and loves. But where does the word "synik" come from? Most people think it comes...