Monday's flurry of protests across New York, which followed an anti-Russia rally at a Moscow city-organized investment conference in New York on Oct. 28, indicate that growing anger over the Russian law might be spilling over into a sensitive area for the Kremlin — the sputtering Russian economy.

The New York Stock Exchange hosted a delegation led by Deputy Economic Development Minister Sergei Belyakov to discuss investment opportunities during its annual Russia Day on Monday. The NYSE had announced that members of the delegation would ring the exchange's closing bell, which signals the end of the day's trading. First Deputy Prime Minister Igor Shuvalov rang the bell at last year's event.

Instead, the symbolic honor on Monday went to members of an employee volunteer program in recognition of their work at the Humane Society of New York, said NYSE Euronext, which runs the exchange.

During last year's event, the Russian flag was raised on the NYSE building together with a banner announcing "2012 NYSE Russia Day."

Amid this year's protests against the Russian law, neither the flag nor any other sign commemorating Russia appeared outside the NYSE building.

"Apparently, the NYSE is embarrassed by their association with the Russian government," said Duncan Osborne, an activist with the Queer Nation gay rights group, in an interview.

By Monday, gay rights activists had gathered nearly 10,000 signatures for a petition urging the NYSE to cancel its Russia Day altogether to protest the law, which was adopted in June and has been blamed by opponents for a recent flurry of attacks against Russian gays.

"Russia's abusive treatment of its LGBT citizens is grimly illustrated by accounts of gay youth being kidnapped, tortured and raped by … gangs whose activities the Russian government allows to flourish and even actively encourages," said the petition posted on the Change.org website.

"It is shocking that the NYSE is calling for investment in Russia," said the author of the petition, Bert Leatherman. 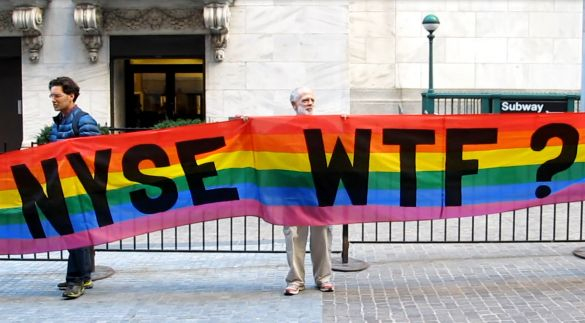 NYSE Euronext CEO Duncan Niederauer said that while the corporation wouldn't cancel Russia Day, he hoped that the event would "provide an opportunity to foster dialogue" on thorny political issues.

"In no way should this event be viewed as an implicit or explicit validation of any Russian government or social policies," Niederauer said in a letter to Queer Nation, a copy of which was posted on the organization's website.

Gay rights protests also prompted a law firm, Goodwin Procter, to bar a Russian investment conference, titled "Russia Forum New York 2013: Investing in a World of Opportunities," from the firm's offices in The New York Times building, where the event had been scheduled to take place Monday. Dealing another blow, New York Mayor Michael Bloomberg and the president of the American Bar Association, James Silkenat, withdrew their support for the conference.

"What it tells us is that at least for some liberal organizations, an association with the Russian government is toxic," said Osborne, of Queer Nation. "They were running away from this."

Handing out flyers to passersby that urged them to "divest," not invest in Russia, the protesters chanted: "Russia Day, we say: Nyet — kiss our assets." The protesters put the emphasis on the first syllable of the word "assets," making the phrase sound like a crude slogan.

"Don't just walk by," Ed Barron from Act Up New York told passersby who reached out for flyers. "They are killing us. Show some compassion."

He said that many members of his organization, which provides support for people living with AIDS, were worried that the Russian law would discourage HIV-positive Russians from seeking testing and treatment for fear of being persecuted, and that this would lead to a further spread of AIDS. 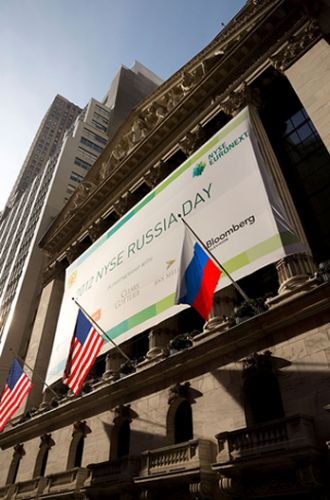 A Russian flag hanging under a banner announcing the Russia Day event on the facade of the New York Stock Exchange in 2012. (NYSE Euronext)

After Goodwin Procter closed the doors of its New York Times building halls to the Russian investment conference, the event moved to the uptown offices of a Polish group that promotes educational exchanges with the U.S., the Kosciuszko Foundation.

As protesters gathered on Monday outside its building, the foundation also sought to distance itself from the Russian group that had rented the conference hall.

"The icing on the cake this morning was that some staff member from the Kosciuszko Foundation came out and read a statement that said: 'We are not affiliated with this meeting, we do not support this meeting's purpose,'" Osborne said.

Foundation officials were not immediately available for comment. But a statement by foundation director Alex Storozynski, posted on the Queer Nation's website, noted that the educational group was a "non-partisan, non-denominational organization that raises money for scholarships."

"We have members of all views, religions, and sexual orientation," he said. "We understand and respect your opinion. The rental of our gallery is by no means an endorsement of intolerance toward any group."

The investment conference was organized by a group called Russian Center New York, whose stated mission is "to connect entrepreneurs, investors, scientists, intellectuals, from Russia and the U.S."

Some activists argued that the fickleness of the Russian "gay propaganda" law meant there were no guarantees of a safe investment.

"The judicial system is completely corrupted and broken," Nina Long, the Belarussian-born co-president of the Russian-speaking American RUSA LGBT group, said in an interview. "Your investment is not protected."

A native of Kiev, Goltsman said she admired the Russian people but found them caught up in a catch-22 where the "gay propaganda" law could not be repealed without raising public awareness of the damage it could inflict, but public advocacy was banned under the same law. 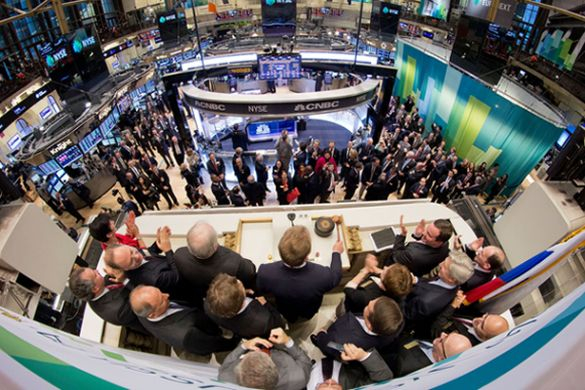 Bill Dobbs, an activist from Queer Nation, acknowledged that any economic fallout from a decline in foreign investment in Russia would primarily hurt ordinary people.

But "a boycott is not a precision weapon," he said, adding that some Russian groups have expressed support for a boycott if that's what it took to overturn the law.

A leader of a group for gay Orthodox believers, George Plagianos, also bemoaned the lack of support from the Russian Orthodox Church in protecting gay Russians from hate crime.

"The church was oppressed during the Soviet times, and when they came out, the church became the oppressor," said Plagianos, who heads the AXIOS Eastern and Orthodox LGBT Christians Ministry. "We are in this world to help each other, not to oppress each other, and religion is supposed to help that."