Thousands of Russians poured into the streets of dozens of towns across the country Monday to voice nationalist sentiments on a holiday that was established by the government in 2005 to celebrate the unity of Russia's diverse population.

Nationalism has been on the rise in Russia since the collapse of the Soviet Union, with both the state and numerous civil society organizations trying to pigeonhole it within formalized limits, but it has come to a fever pitch in the aftermath of ethnically charged riots in Moscow's district of Biryulyovo on Oct. 14.

The riots, triggered by the killing of a young Russian man, allegedly by a migrant worker, led to numerous public calls to toughen the country's immigration legislation, apparently emboldening many nationalists.

The task of keeping nationalism contained has proved to be a tough challenge for authorities, as radical nationalists are still able to attract many young people to their cause by providing what many say the nation as a whole lacks: a guiding ideology and a sense of purpose in life.

In a sign of the intensified nationalist atmosphere ahead of Monday's Russian March, the country's biggest annual nationalist rally, the Nazi flag was displayed during a football match Wednesday between Spartak Moscow and Shinnik Yaroslavl.

On Monday, crowds made up mostly of neo-Nazis put their discontent into words, chanting various slogans, perhaps the least inflammatory of which was: "Stop taking it and take up arms!" 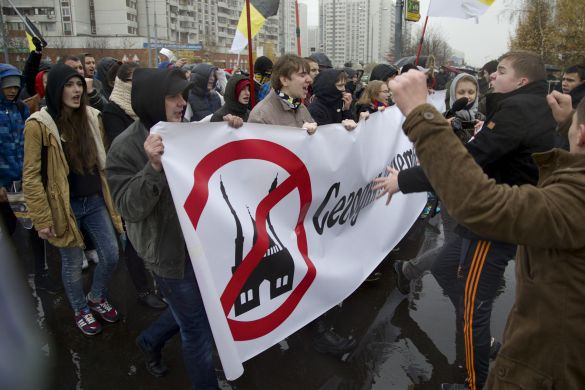 Other slogans insulted Islam and urged violence and drastic measures against minorities.

The crowd, which according to police amounted to 8,000 people, consisted mostly of young men in tight jeans and black jackets. They marched across the southeastern Lyublino district, with a nationalist thrash metal band, Kolovrat, performing at the end.

The organizers claimed that at least 20,000 people attended the march.

"Who are we?" one of the ringleaders kept asking participants, with the crowd shouting "Russians!" in response.

The march was escorted by a helicopter and hundreds of policemen. Thirty people were detained for covering their faces and shouting Nazi slogans, police reported.

"There is no doubt that the Russian nation is in danger today," said Gleb, 32, who declined to give his last name in order to conceal his identity. "People are losing patience — this is exactly what you see here," he said.

Alexander Belov, one of the head organizers, ran around the crowd coordinating diverse groups of pan-Slavs, neo-Nazies, National-Bolsheviks and others. When it started to rain, he tried to cheer people up by making a small orchestra play the wartime song Katyusha, which the crowd immediately began singing along to.

"What we want is to create a Russian unitary state with no nationalist republics," he said. "Either the Kremlin responds to this, or it will have to deal with different actions, like the one that happened in Biryulyovo," he said.

Belov posed with several activists for photos at the rally and then commanded the crowd to start marching. 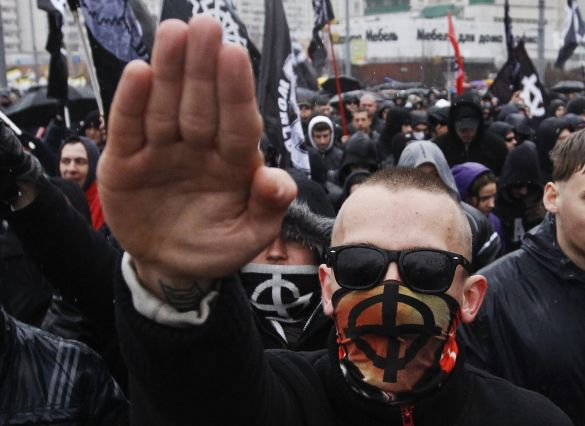 Many of the activists wore sunglasses despite the cloudy, rainy weather.

Dmitry Demushkin, another organizer of the march, said that this year it was much more difficult to get the rally sanctioned.

"I did nothing for two weeks but run around various agencies trying to get permission," he said, surrounded by a crowd of journalists.

The street was blocked  off, with local residents unable to cross it.

One local resident, Svetlana, 80, watched the rally while standing by a fence erected by police.

"Russians have always been accommodating people," she said. "I was a small girl during the war, and there was real unity then."

"Today what we need is justice: We have plenty of laws, but they are not working," she said.

Local residents had to endure various inconveniences because of the rally, with some cafes and stores shut down for the day.

Most activists did not stay for the concert at the end of the event, with at least 100 breaking through the police barrier and running into neighboring courtyards. Some left in search of migrants.

Several participants of the rally resembling skinheads began to approach a group of men drinking near a local library, apparently thinking they were migrants.

"They are Russians; do not touch them!" one of the activists shouted.

The men changed their direction but did not give up on their search.