NEW YORK — As the Moscow city government courted investors at an international conference in New York, its polished effort to present the image of an alluring Western-style metropolis was clouded by the specter of Russia's national politics.

The recent "gay propaganda" law, penalizing promotion of "non-traditional relations" to minors, prompted a protest at the opening Monday of the two-day investment conference, with LGBT rights activists rallying outside the venue and urging participants not to invest in the Russian capital.

And a history of erratic changes in Russian laws led some potential investors to worry that the country might be too unpredictable for business.

Sergei Cheryomin, head of the City Hall department that works with foreign investors and leader of the roadshow delegation to the U.S., conceded in his opening remarks that Moscow wasn't free from a shadow cast by political disputes even though it was the "most economically powerful region of Russia."

"We can't change really dramatically the political image of Russia," he said.

But Moscow's efforts to woo investors at roadshows around the world may be reaping rewards. Direct foreign investment in Moscow rose to nearly $5.4 billion in the first half of this year, up from $4.2 billion in the whole of 2012, according to City Hall statistics, although it's hard to estimate what share of that money could be attributed to roadshows.

"We don't differentiate what we gained from which roadshow," Cheryomin told The Moscow Times. "Our goal is to promote the image of Moscow as a very attractive city for investment."

But the image created by the nation's past of shady business practices and dubious politics may not be easy to shake off.

"A reputation takes a long time to build — and then an even longer time to fight it," Cheryomin's deputy, Yevgeny Dridze, told The Moscow Times.

Moscow's business image has been dampened by Russia's history of erratic changes in legislation and shifts in the rules of the game, Dridze said.

Maxim Gaman, deputy head of City Hall's property department, told investors at the conference that the municipal government had recently streamlined its procedure for participation in land auctions, clearing up much of the bureaucratic quagmire by greatly reducing the amount of paperwork that potential bidders must submit. 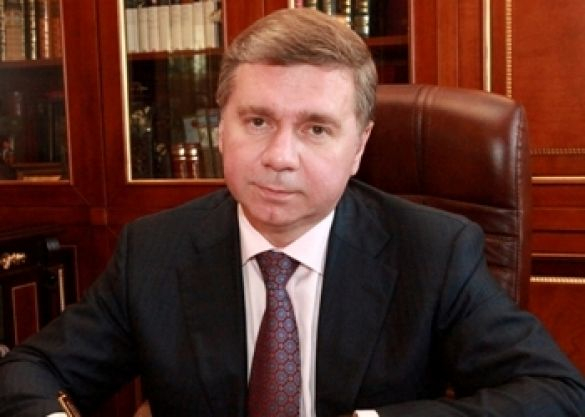 Cheryomin, pictured in a photo provided by City Hall, conceded that political disputes complicated his job.

City officials also lauded a recent program offering investors a lease on historical buildings at a heavily reduced rate of 1 ruble per square meter for up to 49 years, on the condition that the renters cover full restoration costs.

And the city is trying to make its regulations and practices more transparent, Cheryomin said.

"You can still find a lot of cases of corruption, but … we're are trying to improve the transparency of the legal system," he said.

But some investors were not convinced.

"One ruble per square meter is cool, but are the rules going to change?" said Henry Weingarten, managing director of the Astrologers Fund, an investment consulting firm.

Still, he said the roadshow was "well done" and Moscow's image may be improving. "If you tell a story long enough and hard enough, people will believe it," he said in an interview.

In a break from Moscow's previous roadshows, devoted mostly to promoting the city as an attractive place for living and doing business, the city government intends to focus on advertising specific projects for investment from now on, Dridze said.

In one such project, Moscow plans to build 150 kilometers of new subway lines, or about half as much as the 300 kilometers of lines built during all of the Soviet times, Cheryomin said, reiterating a proposal earlier unveiled in Moscow. The city is seeking more than $100 billion for its infrastructure projects through 2030, and the City Hall hopes that about half of that amount comes from foreign investors.

City officials also urged the about 100 guests at the Monday presentation to invest in healthcare, technology, research, tourism and the hotel business.

Several investors said they had heard too much praise for the city itself and not enough information about particular projects.

"I would have liked to see more specific companies' presentations, as opposed to the Moscow government's presentations," said Robert Colorina, director of the AIAC Investment Group.

Moscow officials also lauded the city's annual budget of around $57 billion, with a 10 percent deficit, and the efforts the city has made to fight crime, create new parks and build schools.

Moscow "represents the so-called Western style of life," Cheryomin said. The safety of Moscow's streets is "better than London, better than Brussels, better than Milan," he added. 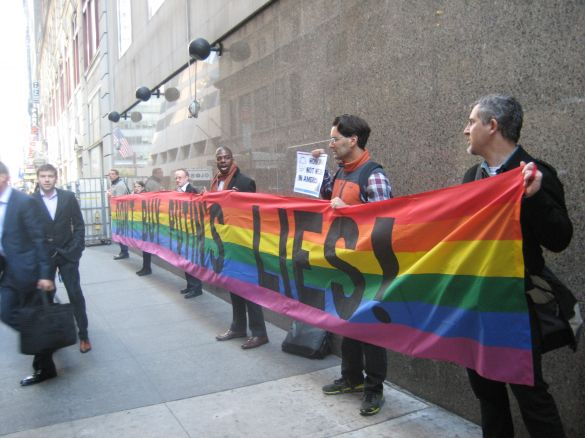 Protesters against Russia's anti-gay laws who gathered outside the conference building might have disagreed. Jay Kallio, an activist from gay rights organization Queer Nation, said his group was concerned about escalating violence against LGBT people in Russia.

"We want people to know where they invest their dollars," he said. "They should divest, not invest."

Inside the conference hall, protesters dominated the initial moments of the meeting.

"You are bigots, you are dishonest," one man shouted at Moscow officials. As security guards led him outside, a second man rose from his seat, turning to the audience: "Shame on you for thinking of investing in this homophobic country." As he was also escorted out, a third man stood up, denouncing anti-gay violence in Russia.

Cheryomin said the accusations represented a "total misconception" of Russia's realities, arguing that the "law only prohibits propaganda to children, it doesn't prohibit love."

Any results of the roadshow may take at least a few months to materialize. Dridze said previous presentations were usually followed by three to four months' "lapse periods," before investors who attended a presentation approached City Hall with proposals.

By an optimistic estimate, out of the 100 people who attended Monday, about 10 might continue negotiations with Moscow, and those 10 leads may produce one or two specific projects, he said.

"That would be a superb result, a great result," he said.