A Dutch photographer has accused Chechen leader Ramzan Kadyrov, a prolific Instagram user, of stealing a photo by posting it online without attribution.

The photographer, Herbert Schröer, said he originally posted a picture of sheep in the French Alps on Instagram a month ago.

Kadyrov apparently posted the same picture, which has been "liked" by more than 6,000 people, to Instagram on Wednesday (since removed).

"Holy [expletive]!!! The president of Chechnya has stolen my Instagram photo and put a filter over it," Schröer said on Twitter after being notified by e-mail that his picture was on the Chechen leader's Instagram page. 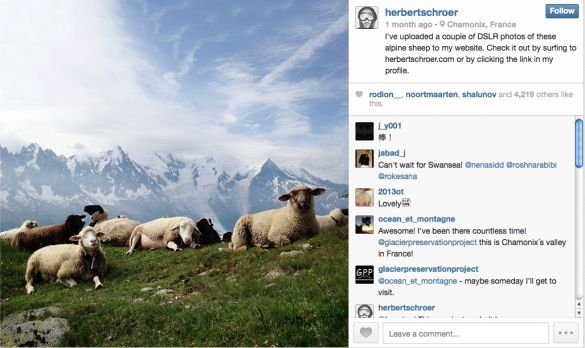 But Kadyrov was coming under fire on his Instagram account from Russian users who had read about the photo flap. "Stealing photos is a bad thing to do even by the president of a Russian region," one reader wrote wryly.

Kadyrov has more than 180,000 followers on Instagram and uses it to post pictures of himself and idyllic shots of Chechen landscapes.