Moscow’s historic center has seen everything from aristocratic opulence to Soviet communal living, but reports that brothels and sex clubs had set up shop in two city-owned landmarks still managed to incite a minor uproar in the capital.

Municipal deputy Yelena Tkach decided to investigate the use of government properties in her district after the violent expulsion of the non-governmental organization “For Human Rights” from their state-owned headquarters on the night of June 22.

She posted the “shocking” results of her research on Facebook on June 26: “Literally 30 meters from the noisily closed “For Human Rights,” in a 19th century historic town house belonging to the city of Moscow, the group sex club ‘Gang Bang’ calmly functions without any complaints from city authorities.”

Though now fallen into disrepair, this 19th-century building was once known to Muscovites as the Sekretaryovka. Once a small, private theater, it became the venue where Konstantin Stanislavsky, the world-famous proponent of naturalistic acting and co-founder of the Moscow Art Theatre, began his career. In Soviet times it turned into a museum devoted to promoting sobriety.

A further 18th-century landmark, the estate of the notable Count Razumovskoi (speculated to have secretly wed Elizabeth of Russia) at Maroseika 2, has also become home to a “tantric sex club,” Tkach said. 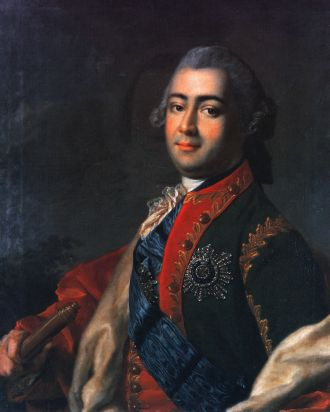 Tkach’s first post pointed the finger straight at the Department of Cultural Heritage, which is not only responsible for protecting architectural monuments in general, but also, Tkach said, had operational control of the Sekretaryovka.

Tkach concluded that department head Alexander Kibovsky must personally have known about the goings-on.

Kibovsky acts as an assistant editor of Stary Tseikhgauz (“Old Armory”), a military history journal published by the foundation Russkiye Vityazi (“Russian Knights”), whose offices happen to be located in the very same building.

“If Mr. Kibovsky declares that he didn’t suspect such neighbors, I will answer with the words of Stanislavsky – I DON’T BELIEVE IT!” Tkach wrote on her Facebook, quoting the director’s notorious catchphrase.

The Department of Cultural Heritage immediately denied both claims. The Sekretaryovka has in fact been managed by the Department of City Property since 2009, a statement on their website said, with the property department confirming its responsibility that same day and announcing plans to conduct an inspection of the property.

According to the heritage department’s statement, the building is divided into three discrete spaces with separate entrances. Two hundred and eighty-five square meters are owned by the company Old House, an April inspection of which did not reveal any illegal facilities or operations. The rest belongs to the city, with 152 square meters rented to Russian Knights, who keep their facilities open to the public, and the remaining 686 square meters allotted free of charge to the Creative Alliance of Artists of Russia, currently the most likely suspect.

As for Kibovsky, the statement says that he works in another place altogether. Russian Knights sprang to his defense, explaining on their website that, “For authors and editors in the age of the Internet there is no need to come to, let alone stay at, the foundation. What’s more several of them live in entirely different cities or countries.”

Apparently undeterred, Tkach and the Coalition in Protection of Moscow, an architectural preservation group that she coordinates, sent a letter to Mayor Sergei Sobyanin on July 29 requesting that Kibovsky be removed from his post. They cited the recent scandal, plus a litany of 11 historical properties that have been threatened or damaged under Kibovsky, as grounds for dismissal.

“We can say with confidence that the inaction of the Department of Cultural Heritage is caused either by incompetence or by conscious intent,” they wrote.

“E.V. Tkach does not want to part with her twisted perception of reality and continues, against the advice of Confucius, to seek a black cat in a dark room,” the statement said, in a tone that observers found rather atypical for an official document.

Tkach does not seem to have any interest in halting the campaign. According to a summary posted on her Facebook page, Tkach attended a meeting with a deputy mayor at City Hall on August 1. Topics discussed included the dismissal of Kibovsky — she was informed that “an internal investigation is being conducted” — and the possibility of creating a committee of municipal deputies, concerned locals and members of the Department of City Property to analyze the use of state property.

Having received promises of action from City Hall, Tkach wrote, “we are taking a week-long pause and await City Hall’s steps toward the creation of means of collaboration and the commencement of work.”

If nothing happens by Thursday, presumably, the show will go on.