It is not without reason that the Russian National Ballet's performance of Kostroma — a two-hour celebration of Russia's cultural heritage — takes its name from an old town on the banks of the river Volga.

Located in the Golden Ring, Kostroma was once the cradle of the Romanov dynasty and has come to embody a nation that is rich in both custom and tradition.

From medieval Rus to the USSR, Kostroma guides its audience through history, providing a glimpse into the past of this culturally-diverse land. The show also takes viewers on a geographical journey as we meet people from the Far North, the steppes in the South and the mountains of the Caucasus and Central Russia.

Kostroma is a spirited spectacle, awash with color and vivid movement. 600 intricately-decorated costumes are used in the show, which also features 300 props and eight set changes. The troupe of fifty dancers only adds to the grandiosity of the performance and is befitting of any tribute to a land as large as Russia. 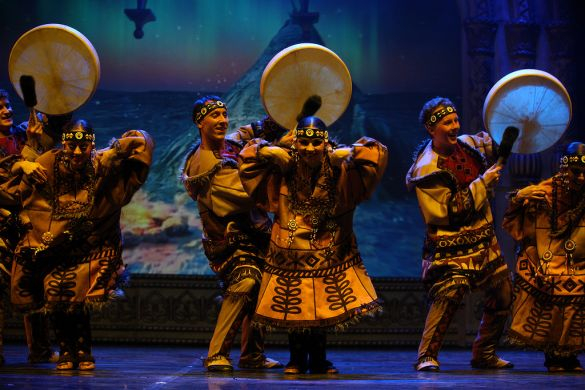 The executive director of Kostroma, Maria Veshina, spoke to The Moscow Times about the show.

Q: Why is the show called Kostroma?

A: The experience of the ancient town of Kostroma was the foundation for our ballet-drama. This city has a rich historical and cultural heritage and has had a large influence on the development of the Russian State. Throughout history, Kostroma has contributed to the artistic life of the Russian people and has itself come to embody Russian culture.

Q: How have the experiences of Kostroma been reflected in the content of the ballet?

A: The outstanding Russian philosopher Pavel Florensky once wrote about Kostroma: "There is nowhere in the whole of Russia, or perhaps in the whole world, where the local people are truer to themselves, to their way of life or to their soul than in Kostroma." Our show takes every pride in this ancestry. The coat of arms given to Kostroma by Catherine II is carried on the ballet's products, as if emphasizing the connection between these times and the continuity of the national culture.

Q: Why should people come and watch the show?

A: The Russian National Ballet's performance of Kostroma provides an opportunity to get acquainted with the culture and history of a great country in literally one night!

The show offers something for the whole family. It is a real-life fairytale: colorful costumes, video projection, heavy smoke and a starry sky. The show also features a range of musical instruments, weapons belonging to a number of Russian heroes, a black horse and of course a huge samovar!

The incredible technique of our performers is not all that fascinates children and their parents. History, technology and professionalism help to engage the attention of adults while the brilliance of this colorful fairy tale holds the attention of even the youngest viewers.