President Vladimir Putin on Tuesday acknowledged the whereabouts of fugitive whistleblower Edward Snowden but said "any accusations against Russia are nonsense and rubbish" and urged the fugitive to leave as quickly as possible.

Though the Russian leaders' statements may seem ambiguous, they can both be true: As a transit passenger, Putin said, Snowden requires no visa and has the right to depart to whichever destination he chooses — all without setting foot on Russian territory or requiring any assistance from Russian authorities.

The ongoing spat between Russia and the U.S. began on Sunday, when an unnamed Aeroflot official said Edward Snowden, now officially charged with treason by the U.S. for revealing highly classified surveillance programs, was due to board a flight from Hong Kong to Moscow and then another one to Havana on Monday afternoon.

Russia and the U.S. have no extradition treaty that would require Russia to hand Snowden over to U.S. authorities, but U.S. officials, including Secretary of State John Kerry, have warned that any assistance given to Snowden by the Russian side would be severely damaging to Russia-U.S. Relations.

Nevertheless, Putin said Tuesday that Russia had no intention of giving Snowden up, that the fugitive had never received any sort of assistance from Russian security services and that he was "a free man, the sooner he picks a final destination, the better it is both for us and for him," Kommersant reported.

In comments to Interfax, the president said he wanted nothing to do with such affairs, neither with WikiLeaks nor with Snowden.

Foreign Minister Sergei Lavrov has also denied all accusations of Russian complicity in Snowden's crusade to escape the clutches of the U.S. government. 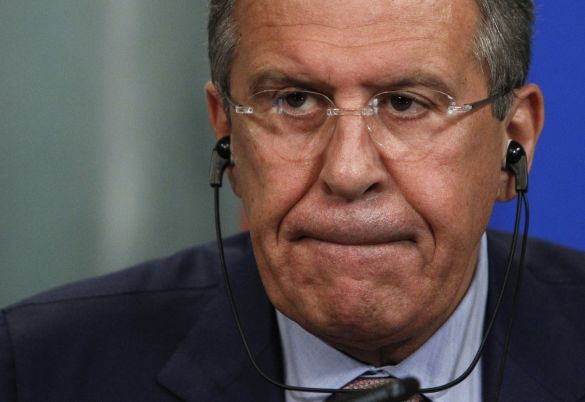 Lavrov listening to a headset at a news conference in Moscow on Tuesday. (Sergei Karpukhin / Reuters)

"I have to say it right off the bat that we have no relation to Mr. Snowden, his relations with American justice or his movements around the world," he said during a news conference with Algeria's foreign minister on Tuesday.

"He chose his route on his own, which became known to us, as to most of you in this room, from mass media," Lavrov said. "He did not cross the Russian border."

Ever since the 30-year-old former NSA contractor supposedly arrived at Moscow's Sheremetyevo Airport from Hong Kong on Sunday, Washington has put tremendous pressure on Russia to extradite the fugitive to the U.S. and avoid giving him shelter him or refugee status.

While several republican senators have made broad generalizations about the issue's consequences on Russia-U.S. ties, America's top diplomat has tried to downplay the row.

"I would simply appeal for calm and reasonableness. We would hope that Russia would not side with someone who is a fugitive from justice," U.S. Secretary of State John Kerry said, The Associated Press reported.

Lavrov's statement that Snowden never crossed the Russian border only fueled speculations that he might have been whisked away to an unknown direction before going through passport control.

Others have argued that he could have stayed in Sheremetyevo's transit zone, which would not require Snowden to clear customs for at least 24 hours. This period of time has already lapsed, however, meaning that either Snowden has obtained a Russian transit visa, which can be done directly in the airport, was whisked to another country by diplomats, or has breached the Russian law and stayed.

There is also the possibility that he lodged at the "Vozdushny Express" capsule hotel, accessible from the transit area. But the hotel's receptionist told Reuters that Snowden came by on Sunday to check prices, only to never show up again.

Ecuador's foreign minister said Monday that his government was in "respectful" contact with Russia over how Snowden's situation should be resolved, casting doubt on Lavrov's assurances that Russia never had anything to do with Snowden's escape.

At the same time, State Duma International Affairs chairman Alexei Pushkov said there was no  reliable confirmation that Snowden had ever arrived in Moscow in the first place, leading some to believe that the whole thing was a well-orchestrated goose chase to keep his true whereabouts unknown.

"Where did we get the information that Snowden was in Russia? Nobody saw him on the Hong Kong flight or at the airport," Pushkov told Interfax. "He can be anywhere!"

Women who bear and raise 10 or more children are eligible for the designation.
‘neoliberal totalitarianism’

Putin said the U.S. is “attempting to prolong” the war in Ukraine and spread “chaos” by provoking conflict between China and Taiwan.
black smoke