ST. PETERSBURG, May 30 (R-Sport) — Russia on Thursday unveiled the Sochi 2014 Olympic medal set, opting for a two-color design evoking the jagged Caucasus mountain range and black sand beaches of the nearby Black Sea.

Nearly 1,300 medals are being produced for Russia’s first Winter Games by Adamas, the country’s largest jeweler, with each weighing between 460 and 531 grams.

The metal-polycarbonate Sochi medals, which feature a craggy grayscale design tucked behind a jagged border of gold, silver or bronze, were crafted by four Russian designers working for the U.S.-based Leo Burnett advertising agency.

“I’m sure they will find lots of Russian owners,” organizing committee chief Dmitry Chernyshenko said of the medals. “But I wish all foreign competitors well too.”

Without offering an explanation, Chernyshenko said the design reflected the “eternal values of Russia,” as well as the country’s “innovative approach to the games.”

The awards received a president’s blessing soon after as President Vladimir Putin and outgoing IOC chief Jacques Rogge cast their gaze over the medal sets. 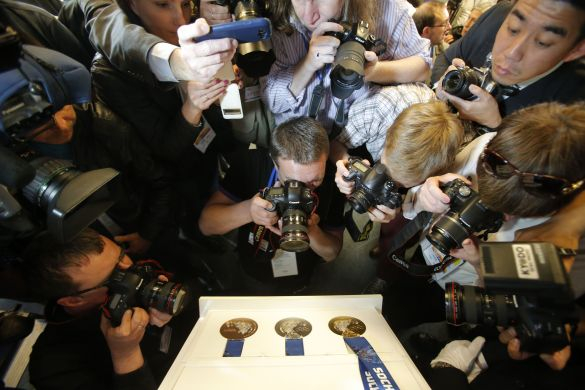 Journalists battling each other for elbow room to take photos of the 2014 Sochi Olympic medals. (Dmitry Lovetsky / AP)

The mountain-and-sea motif was also captured by the Vancouver 2010 medals, which carried a rugged surface meant to represent the Canadian city’s similar topography.

In Sochi, the front of the medals will, as usual, also display the Olympic rings. On the reverse side, the official name of the Games will be written in Russian, English and French over the English name of the competition and Sochi 2014 emblem.

President Vladimir Putin has reiterated his support for wrestling remaining in the Olympics after the Rio de Janeiro Games.

Wrestling was “one of the fundamental sports” of the Olympics, Putin told International Olympic Committee members at a lunch in St. Petersburg on Thursday, The Associated Press reported. After the IOC removed wrestling as one of the core sports for the 2020 Games in February, Putin called the decision  “unjustified” and promised he’d do what he could to keep it in the games.

His latest comments came one day after the IOC executive board included wrestling on a shortlist for the 2020 Games. A final decision will be made in September in Buenos Aires,  Argentina.

Russian businessmen and officials have stolen up to $30 billion from funds intended for preparations for next year‘s Sochi Winter Olympics, according to a report released on Thursday by opponents of President Vladimir Putin.

The report, written by Boris Nemtsov and Leonid Martynyuk, alleges that the most expensive sports complexes built for the Games were commissioned without competition or public tenders, Reuters reported. Government officials have previously dismissed reports of corruption around the Games. 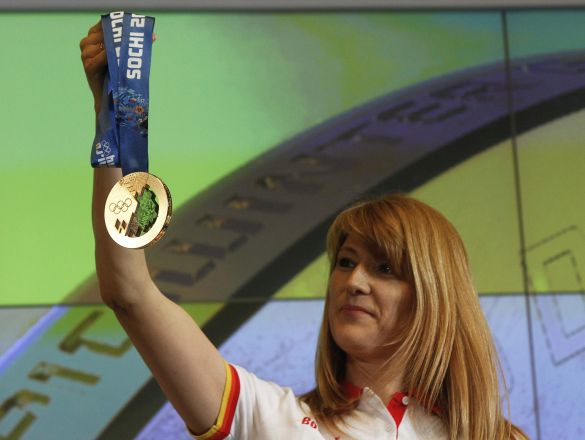