BOSTON — Tamerlan Tsarnaev ranted at a neighbor about Islam and the U.S.. His younger brother, Dzhokhar, relished debating people on religion, "then crushing their beliefs with facts."

The older brother sought individual glory in the boxing ring, while the younger excelled as part of a team. Tamerlan "swaggered" through the family home like a "man-of-the-house type," one visitor recalls, while Dzhokhar seemed "very respectful and very obedient" to his mother.

The brothers, now forever linked in the Boston Marathon bombing, in some ways seemed as different as siblings could be. But whatever drove them to allegedly set off two deadly pressure-cooker bombs, their uncle is certain Dzhokhar was not the one pulling the strings.

"He's not been understanding anything. He's a 19-year-old boy," Ruslan Tsarni said of his brother's youngest child, who was clinging to life in a Boston hospital Sunday after a gunbattle with police. "He's been absolutely wasted by his older brother. I mean, he used him. He used him for whatever he's done. For what we see they've done, OK?"

Criminologist James Alan Fox said the uncle's intuition is justified. In cases like this, he said, it is highly unusual for the younger participant — in this case, a sibling — to be the leader.

"I would be surprised," said Fox, the Lipman professor of criminology, law and public policy at Boston's Northeastern University. "Very surprised."

When the bullets began flying Thursday night and 26-year-old Tamerlan went down, his younger brother ran him over — dragging him for about 9 meters — before ditching the car and fleeing on foot. After a 24-hour manhunt that shut down most of the Boston metropolitan area, police cornered the gravely wounded Dzhokhar hiding in a boat in a backyard only blocks from where his brother was taken.

Officials said Dzhokhar was in serious condition, unable to communicate. So, at least for now, investigators and the public are left with an enigma.

The ethnic Chechen family came to the U.S. in 2002, after fleeing troubles in Kyrgyzstan and then Dagestan. They settled in a working class part of Cambridge, where father Anzor Tsarnaev opened an auto shop. He returned to Dagestan about a year ago.

Luis Vasquez, a candidate for the Cambridge City Council, went to school with Tamerlan and later helped coach Dzhokhar's school soccer team. With the father gone, Vasquez said the older brother assumed a kind of paternal role, at least where the girls in the family were concerned.

Vasquez attributed it to "his culture" and "what his family expected out of him." 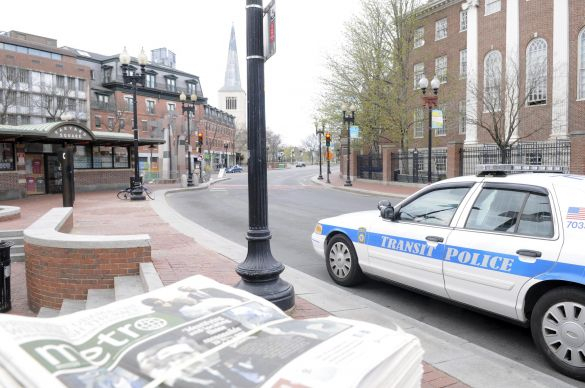 Newspapers depicting the bombing suspects sitting unread in a square in Cambridge, Massachusetts, during the manhunt Friday for Dzhokar Tsarnaev, who studied in Cambridge. (Neal Hamberg / Reuters)

David Mijares, who trained in boxing with Tamerlan in school and later coached the younger brother in soccer, says his friend opened up about his hardships in Russia. He agreed that Tamerlan felt pressure to be the man of the house.

"He had to be a man at a very early age," said Mijares, who himself considered Tamerlan a mentor. "That would be, in my opinion, a huge reason for who he was, all serious and no nonsense."

John Pinto said the pair were frequent patrons at his Midwest Grill, a couple of blocks from their house. When they walked in, he said, Tamerlan was always in the lead.

"I think the big brother is more the command guy, boss," Pinto said, puffing out his chest for emphasis.

That said, Dzhokhar was very much his own man. While he would tag along to Tamerlan's boxing practices, the younger brother was into wrestling.

In one of his tweets, he complained that his mother was trying to arrange a marriage for him, as she'd done for his sisters.

Tamerlan preceded his brother at the prestigious Cambridge Rindge and Latin High School, which counts celebrities Matt Damon and Ben Affleck among its alumni. But he does not appear to have been a standout student and athlete whose reputation Dzhokhar would have felt pressure to live up to.

"To be perfectly honest, I did not know he had an older brother from the start," said classmate Alexandros Stefanakis, who hung out with Dzhokhar outside school.

Anne Kilzer would go to the Tsarnaev home for regular facials from the boys' mother, Zubeidat. She said the older brother was a "macho guy," whereas Dzhokhar seemed more cerebral.

The few times that Tamerlan was there, he would wave his mother off when she tried to introduce him. "He sort of swaggered through," she said. "Sort of a man-of-the-house type."

In a blog entry, Kilzer's daughter, Alyssa, suggested that the mother became increasingly religious as their acquaintance progressed. She began wearing a hijab, the traditional Muslim headscarf.

"She started to refuse to see boys that had gone through puberty, as she had consulted a religious figure and he had told her it was sacrilegious," Alyssa Kilzer wrote. "She was often fasting. She told me that she had cried for days when her oldest son, Tamerlan, told her that he wanted to move out, going against her culture's tradition of the son staying in the house with the mother until marriage."

She said the mother also expressed some rather strident views about the U.S. government. But it was difficult to know who was influencing whom in the household.

"During this facial session she started quoting a conspiracy theory, telling me that she thought 9/11 was purposefully created by the American government to make America hate Muslims," Kilzer wrote. "'It's real,' she said. 'My son knows all about it. You can read on the internet.'"

Kilzer didn't say which son the mother was talking about. Kilzer was studying in Scotland and could not immediately be reached.

Tsarni said in an interview from his home in Maryland that a deep rift opened between him and his sister-in-law, but that he tried to maintain a relationship with the boys. However, that effort began to fall apart several years ago, he said, when Tamerlan "started carrying all this nonsense associated with religion, with Islamic religion."

When he asked his older nephew why he wasn't in school, he said Tamerlan gave an enigmatic answer. "Oh, I'm in God's business," the young man replied.

Tamerlan would throw out foreign words like "jihad" and "Inshallah" — Arabic for "God willing" — without really understanding their meaning, he said. Though Tsarni is himself Muslim, he said he does not worship at a mosque.

The uncle was surprised when he learned that Tamerlan had gotten married to an American woman — a "good Christian family girl," who his nephew said was about to convert to Islam.

In February, Alexander Podobryaev, who lives a couple of houses from the Tsarnaevs, exchanged pleasantries with Tamerlan as they shoveled snow. He said the man pointed to a woman in a black Muslim headscarf and identified her as his wife.

One of the brothers' neighbors, Albrecht Ammon, said he had a bizarre encounter with Tamerlan in a pizza shop about three months ago. The older brother argued with him about U.S. foreign policy, the wars in Afghanistan and Iraq and religion.

He said Tamerlan referred to the Bible as a "cheap copy" of the Quran and that many of this country's wars "are based upon the Bible — how it's an excuse to invade other countries."

Dzhokhar, on the other hand, was "real cool," Ammon said. "A chill guy."

An elder at the Islamic Society of Boston Cultural Center said Tamerlan occasionally attended Friday prayer services at the mosque over the past year and a half.

About three months ago, around Martin Luther King Day, Tamerlan stood up and interrupted the imam during the sermon, said Anwar Kazmi, a board member of the Islamic Society. The imam had compared the slain civil rights leader to the Prophet Muhammed, drawing objections from Tamerlan, Kazmi said.

Mosque leaders later sat down with Tamerlan and discussed his rant, said Kazmi, who said Tamerlan returned to future services and had no further outbursts.

While his older brother was railing about religion and world politics, Dzhokhar seemed more interested in the HBO series "Game of Thrones" and other television shows.

"Breaking Bad taught me how to dispose of a corpse," he tweeted on Jan. 16, referring to the popular AMC series about a dying chemistry teacher who turns to cooking methamphetamine to leave money for his family.

He did tweet about religion, but they were hardly the words of a hard-core zealot.

On Nov. 29, he wrote: "I kind of like religious debates, just hearing what other people believe is interesting and then crushing their beliefs with facts is fun." And on Jan. 15: "I don't argue with fools who say Islam is terrorism it's not worth a thing, let an idiot remain an idiot."

However, he acknowledged in another message around Christmas that the "Brothers at the mosque either think I'm a convert or that I'm from Algeria or Syria."

Fox said it's not unheard of for the younger person in a crime team to be the dominant personality. But he said it's rare.

"In this case, the older brother is the one that seems to have become religious and drawn to Islam," Fox said. "The older brother dropped out of school … whereas the younger brother, it was all positives."

But, he said, "the age factor is critical here."

Tamerlan was a fairly gifted boxer, but he preened about fighting prowess that often fell far short. His younger brother seemed content to be part of a team.

Marvin Salazar was two years older than Dzhokhar when they attended Community Charter Schools of Cambridge, where they played soccer together. He was impressed by the younger boy's smarts and drive but noted that while Dzhokhar was very fast, he wasn't the kind of kid who needed to showboat and score goals.

"I remember he told me he liked to play midfield," the 21-year-old said. "He's the guy who sets everybody up for the plays. He's one of the most important people."

Tamerlan once said he had no American friends. His brother had lots of them, but fellow students at UMass-Dartmouth say he had increasingly taken to hanging out with other Russians.

Dzhokhar became naturalized last September, federal officials said. His older brother had a green card but may have been thwarted in his quest for U.S. citizenship by an assault charge, his father told The New York Times.

If Tamerlan recorded his thoughts, they have not yet surfaced — at least publicly. His bother left a trail on the Internet.

In March, Dzhokhar tweeted: "Evil triumphs when good men do nothing." A week and a half earlier, he reminded his followers, "Never underestimate the rebel with a cause."

Tsarni was confident authorities will find that Tamerlan was his younger brother's "mentor."

"Dzhokhar, of course, was looking up at him," he said.

In one of the now infamous photos the FBI released to the public in hopes of tips, the older brother has his head down, the visor pulled low over his face as if he's trying to hide. Dzhokhar, by contrast, has his white baseball cap turned backward, revealing his entire face, his chin is thrust confidently into the air.