Contribute Today
By Alexandra Odynova
May 21, 2012 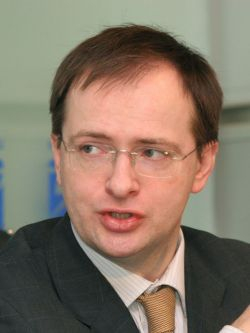 New Culture Minister Vladimir Medinsky, a historian who has kept a distance from the cultural world, is perhaps best known for writing a series of pro-Kremlin books called “Myths about Russia” — a role that is prompting calls that his title be changed to propaganda minister.

Medinsky, 41, one of the biggest surprises of the Cabinet unveiled Monday, is a senior member of the ruling United Russia party, and he replaces former diplomat Alexander Avdeyev at the Culture Ministry.

Accused of plagiarizing his doctoral dissertation in January, Medinsky has flirted with controversy for years. Suspicions have swirled that he used his chairmanship of the State Duma’s Culture Committee from 2003 to 2011 to promote his “Myths About Russia,” which includes titles such as “About Russian Alcoholism, Sloth and Cruelty” and “About Russian Slavery, Dirt and ‘Prison of the Nations.’”

The series — which was heavily advertised on the city's billboards and had a print run of 350,000 copies — later became the basis of his dissertation, which looked into how foreigners depicted Russia in the 15th to 17th centuries. Bloggers accused him of plagiarism in January — charges that he denied but which caused a fierce debate among scholars and other experts.

Medinsky believes “all foreigners who wrote bad things about Russia were foreign intelligence agents,” said Yulia Latynina, a talk show host and Moscow Times columnist who spoke with Medinsky on Ekho Moskvy radio last week, according to comments on her blog.

In one of his remarks related to culture, Medinsky complained that Josef “Stalin was good at ideology and brainwashing, but now everything is neglected.”

Pavel Rudnev, a theater critic, said Medinsky is “absolutely an unknown figure” in the artistic community, and that makes it hard to forecast his future role there.

“He is clearly a party man, which raises certain fears,” Rudnev said by telephone. “But he hasn't done anything for the field yet, which raises a slight hope.”

But prominent gallery owner Marat Gelman was less optimistic. “The Culture Ministry is turning into the propaganda ministry,” he said, according to Gazeta.ru.

Medinsky, born in Soviet Ukraine on July 18, 1970, started his career at the Russian Embassy in Washington D.C. in 1991 and 1992 and later founded a PR agency. In the late 1990s, he headed the information policy department at the Tax Ministry, and from 2002 to 2004, he led United Russia's elections campaign in Moscow and headed the party’s local branch.

He is married. No immediate information was available about potential children.