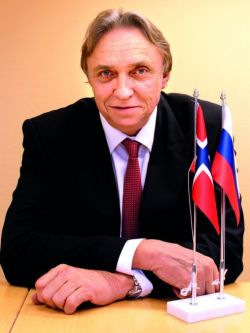 The "Second Norwegian-Russian Business Forum: Towards a Partnership for Modernization" is taking place in Moscow today, organized by the Chamber of Commerce and Industry of the Russian Federation and the Norwegian-Russian Chamber of Commerce. Almost 150 Norwegian business representatives have come to Moscow following President Dmitry Medvedev's invitation to take part in the modernization of the Russian economy, announced in connection with his state visit to Oslo last year.

Norway and Russia have been doing business for centuries, and in the 1870s, Russia was the fourth most important trading partner of Norway due to broad cooperation in the high north (Pomor trade). After the maritime delimitation between Norway and Russia in the Barents Sea and the Arctic Ocean was determined last year, we look forward to strengthened cooperation in the north. But Norwegian companies' interests in Russia are not limited to the high north, as there are several sectors with good prospects for cooperation. This is reflected in the forum's program.

Oil and gas is a key sector in the Norwegian economy, and fruitful cooperation between Gazprom, Total and Statoil in connection with the Stockman gas field in the Barents Sea is well known. An investment decision of the first phase of this project will, if implemented, have broad impact on the northwest of Russia and the future bilateral economic cooperation in the Arctic between Norway and Russia. But executing a project of this size involving the establishment of significant new infrastructure will require fiscal support from the Russian government.

Norwegian oil and gas involvement in the Russian economy also includes cooperation with the Norwegian offshore supply industry. Norwegian companies such as Det Norske Veritas, Aker Solutions, FMC Technology and others have been active in the Russian market for years and work closely with Russian partners. Last year for instance, FMC Technologies concluded a large contract with Gazprom Dobycha Shelf about delivery of a subsea system to the Sakhalin III project.

While fishery resources worldwide are depleting due to a lack of sustainable harvesting, Norwegian and Russian fishermen in the Barents Sea enjoy record high volumes of catches within fishing quotas agreed by the Joint Norwegian Russian Fishery Commission. In addition, Norwegian producers of fishing gear and aquaculture equipment and technology are presently looking into how Norwegian businesses can contribute to the ongoing modernization of the Russian fishing fleet and fish farming industry. Also, ship building and ship repair is an area with noticeable potential for cooperation.

Information and communications technology as a tool for modernization of an economy is another topic at the forum presented by Telenor, a major shareholder of VimpelCom. Another issue of mutual interest at this roundtable session is telemedicine, which is important to both nations due to their respective sizes, Norway being one of the longest countries in Europe and Russia the largest country in the world.

Energy-efficiency in commercial buildings and housing is of significant importance for countries in harsh environments such as Russia and Norway. Research and innovation are crucial to successful transformation of societies in general, and Norway and Russia have established a profound cooperation between several universities and research institutions. Innovation in the small and midsized business sector, which in Norway accounts for up to 90 percent of all businesses, is also discussed, and we are ready to share our experiences.

The roundtables will also provide industry recommendations to the Russian and Norwegian chairs of the Norwegian-Russian Intergovernmental Commission on Economic, Industrial and Scientific-Technical Cooperation, Viktor Zubkov and Trond Giske.