The first was an address to the Federal Assembly that carried an important message on the climate and environment. The next day, Putin spoke at the virtual Leaders Summit on Climate in Washington.

In fact, this was not the first time Putin had joined the Western climate mainstream. After all, he was the one who authorized Russia’s participation in the Paris Agreement (even if it was done strangely — by decision of the prime minister without ratification by parliament).

Still, Putin’s rhetoric has changed since then.

To compare, consider Putin’s speech at the Valdai Club in the fall of 2019. The gist of it was this: Although the anthropogenic factor of global warming is very doubtful, we’ll play along because the West is serious about these climate issues. For us, it’s easy because all of our natural gas, hydro and atomic resources make the Russian energy sector very green.

The main idea was not to cause any harm to business or let it fall victim to carbon taxes and the like.

Russia’s infamous Decree No. 666 was signed in the same spirit. That caused an outcry from this country’s green lobbyists because it called not for cutting greenhouse gas emissions, but increasing them from the current 50% of 1990 emissions to the new goal of 70% by 2030. Now, however, Putin has declared the goal of cutting Russia’s accumulated net greenhouse gas emissions below those of the European Union.

It would appear that Putin is getting serious about the climate. His motives are clear: he wants to find at least some common ground with the West, and particularly with the U.S. Now that Joe Biden is in the White House, the climate is a great place to start.

As the Caspian Sea Disappears, Life Goes on for Those Living by Its Shores

It’s also possible that Putin is emulating Chinese President Xi Jinping, whom the West is showering with praise for his pledge to make China carbon neutral by 2060 — a dubious promise he delivers with a remarkably straight face.

And when Xi says nice things about the climate, nobody questions him about the treatment of the Uighurs.

Seeing this, Putin might have concluded that the more he talks about the climate, the fewer questions he’ll have to answer about his treatment of jailed opposition leader Alexei Navalny.

Does this mean that Russia is using the climate as a ploy to “greenwash” more uncomfortable issues? Not completely.

The Russian authorities are eagerly looking for any Keynesian ideas that will lead to an economic breakthrough, and a “green economy” fits the bill perfectly. Officials would have to create an artificial demand for new technologies, thus spurring the creation of new jobs, an increase in industrial production and household incomes, and so on.

This is why a serious circle of green lobbyists has formed around Putin and is urging him to get ambitious on the climate. It includes several groups.

The first is composed of officials who want to create a new flow of government funds from which they can skim as they distribute it to others, or profit through other schemes connected with carbon taxes and the like.

The second groups consists of potential manufacturers of green equipment.

The third is state-owned banks that will profit from credit they extend to green programs backed by state guarantees.

The question naturally arises as to who will pay for the transition to green energy. Russia is not like the U.S. that can run up a sky-high national debt, or the EU that openly plans to shift the costs to suppliers of hydrocarbons and products with a high-carbon footprint — an approach China is expected to follow.

Russia has no money in its coffers to pursue green energy, nor would such a course be a moneymaker. However rosy a picture the proponents of a green transition in Russia might paint, it could never generate export revenue comparable to that of oil & gas. It is a sad but simple truth. Russia sells gas to Europe simply because the resource is in short supply there. When it comes to green energy, though, Europe can produce all it needs, as can China.

Whereas the U.S., Europe and China already produce their own green energy equipment, Russia would have to import those technologies.

And even if Russia were to somehow produce massive amounts of green energy and could fill a niche in the EU or Chinese markets, everything would depend on the cost of transporting that energy — which is currently 7–8 times more expensive than transporting gas.

The story with hydrogen is about the same: no one has made an impartial calculation of the cost of transporting hydrogen or methane-hydrogen mixtures through gas pipelines that takes technical difficulties and safety issues into account, or of exporting hydrogen by sea in the form of ammonia.

Russia differs significantly from China in this respect. China is the world’s largest importer of oil and gas, but it can also produce wind and solar power stations. And, because China has the rare-earth metals necessary to make batteries, it can produce electric cars inexpensively.

It turns out that only a large raw materials business can fund a country’s green policy. As Anatoly Chubais, Putin’s special envoy for sustainable development goals has said, the government must finance its own green transition. Any country unwilling to “feed” its own “green army” will wind up feeding another country’s instead

Raw materials producers are still hoping to find a cheaper way. They are placing their bets on planting forests and buying green certificates — that will be used to pay for the very same planting of forests. They also want to recalculate the absorption capacity of Russia’s forests and ecosystems to their own advantage.

This brings us to the main point. The problem is that Russia does not intend to make real improvements to the environment for the simple fact that leaders are completely indifferent to the genuine ecological problem.

This is the saddest part. Officials are using ostensibly more ambitious and high-sounding green rhetoric as a smokescreen for domestic political problems and lobbyists are using the transition to green energy as a way to raise money for pet projects. Every attempt at bureaucratic modernization in Russia ends the same way, with government funds flowing into the pockets of shrewd officials and the industrial and financial structures to which they are closely tied.

As a result, the raw materials business will simply pay off the green lobbyists — who will spend that money on their personal projects. So what if Norilsk Nickel paid a nearly $2 billion fine for its Arctic oil spill: will the chronically polluted city of Norilsk become an urban paradise as a result?

As disappointing as it might sound, any honest observer can see that Russia’s green policy is simply another struggle for government funds, and not for a better environment. 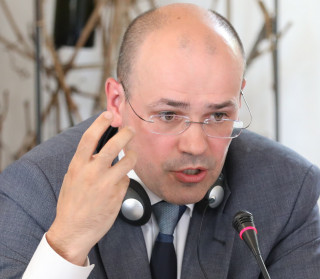 Konstantin Simonov the Director-General of the National Energy Security Fund.

The Laptev Sea plays a crucial role in generating ice coverage for the entire Arctic.
cars of the future

In 20-30 years, everyone in Russian will transition to electric vehicles, the climate adviser says.