DZHABYK, Chelyabinsk Region — As high winds drove wildfire through parched woodland to close in on the village of Dzhabyk in early July, schoolteacher Lyubov Slyusar crammed a handful of pupils into her car and drove through the burning forest to safety along the sole dirt track connecting the settlement with the outside world.

“It was impossible to breathe,” said Slyusar, whose two-storey cottage was burned to cinders in 15 minutes by the forest fires that destroyed around a quarter of the houses in this small village in Russia’s Ural mountains, on the border between Europe and Asia.

“The heat was unimaginable. I’ve never known anything like it.”

With Russia’s 2021 wildfire season already the country’s second most destructive this century, having claimed an area the size of Greece, Slyusar is only one of thousands of people whose lives have been turned upside down by blazes expected to rage on for at least another month. Many of those affected say the emergency services didn’t do enough to help them and hope Russian President Vladimir Putin will step in.

“I have a lot of faith in the state, in Putin,” said Slyusar. “They’ve promised to help.”

It’s been another long, hot summer in Dzhabyk — a remote railroad outpost of around 600 people nestled in the plains and forests near Russia’s border with Kazakhstan.

For two months before the inferno broke out, not a drop of rain had fallen on the village.

With much of the southern Urals bone dry amid a heatwave that saw temperatures consistently above 30 degrees Celsius, the land around this impoverished village of low-slung wooden cottages became a tinderbox.

In the Chelyabinsk Region alone, this year’s fires have consumed an area six times larger than the year before, according to official data from AviaLesOkhrana, a state forestry regulator.

Though wildfires have become a regular occurrence in Russia, they have been mostly confined to the country’s vast wildernesses, only rarely affecting human settlements.

While historically large fires in 2019 and 2020 burned for months without damaging infrastructure, this year has seen large-scale evacuations of fire-menaced villages in Yakutia, where authorities have begun felling trees to protect property.

When the fires came to Dzhabyk — one of the most isolated settlements in the region — the emergency services were caught unawares.

Despite fires having burned through nearby forests for several days, it fell largely to Dzhabyk residents — a mix of local railway workers and weekenders from the nearby industrial city of Magnitogorsk — to defend their homes as the flames approached.

“We have some genuine heroes in this village,” said Yelena Budaeva, a retired teacher whose house was one of only a few on her street to survive the inferno.

“People who were in the village came together with whatever they had to fight to fire.”

Today, a month after the fires, the community still bears the scars of its brush with destruction, and harbors much resentment over why it came to this.

On Russia’s Facebook-equivalent VKontakte, a Dzhabyk residents’ group was filled with praise for the locals who had rallied to defend the village — and dark rumours about why the emergency services allegedly failed to help them.

“Some of the firefighters said they wouldn’t extinguish the houses, and that their orders were only to put out the forest fires,” said retired teacher Budaeva.

“Many people blame the emergency services for not doing their job,” she added. “Some of them just stood around, doing nothing.”

“The locals had to do it themselves.” 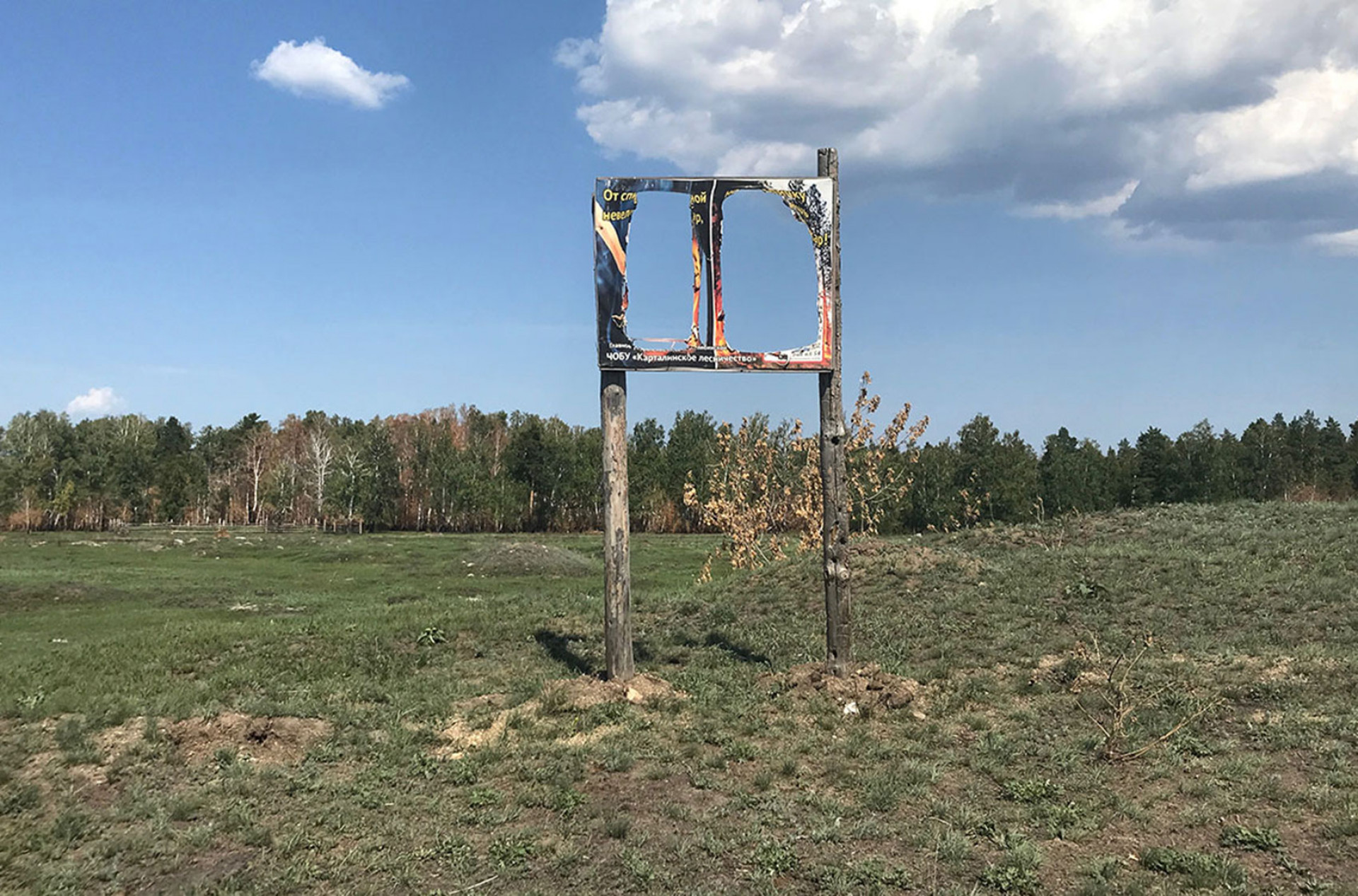 A defaced sign warning of the risk of wildfires in Dzhabyk. Felix Light / MT 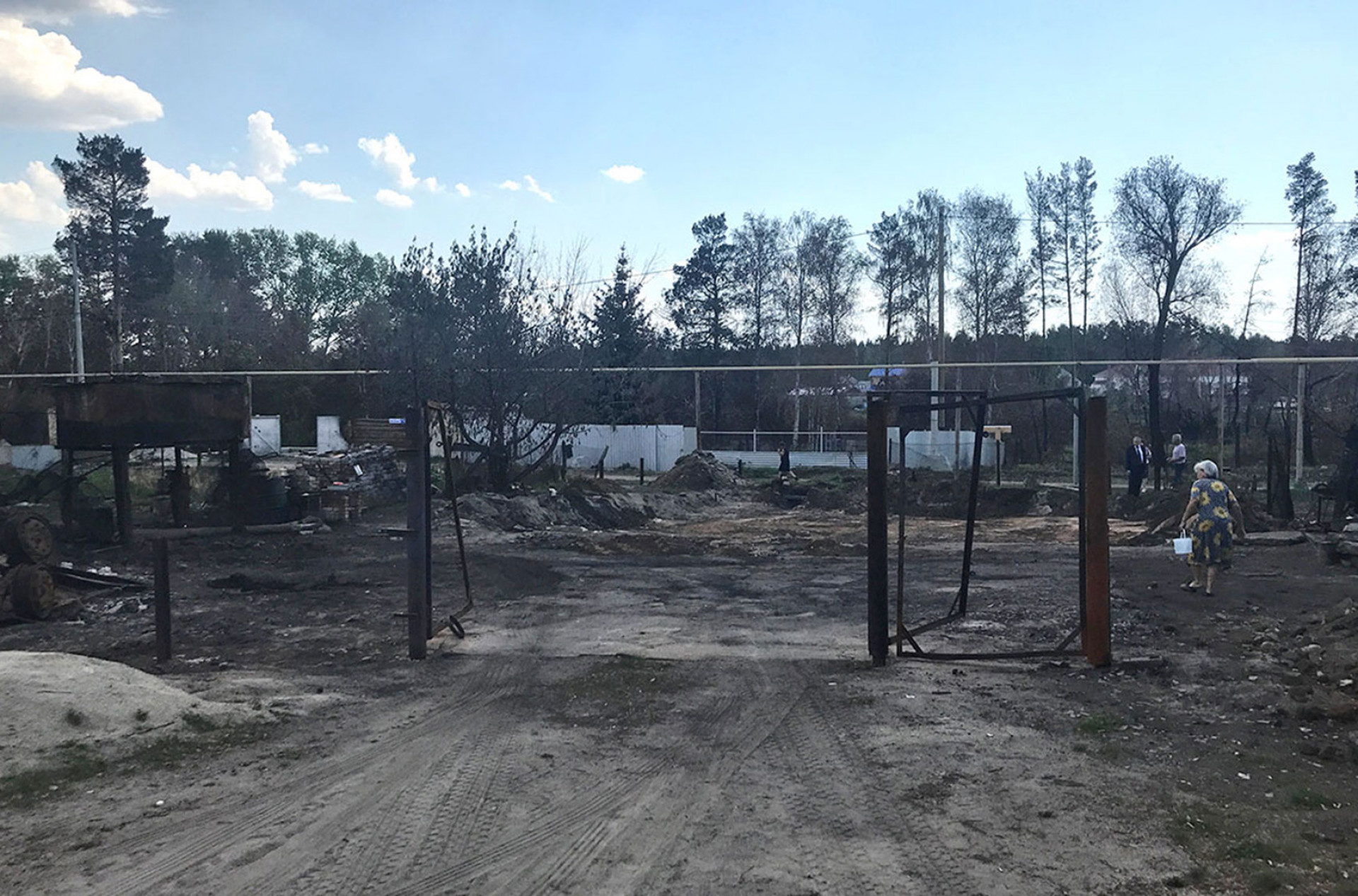 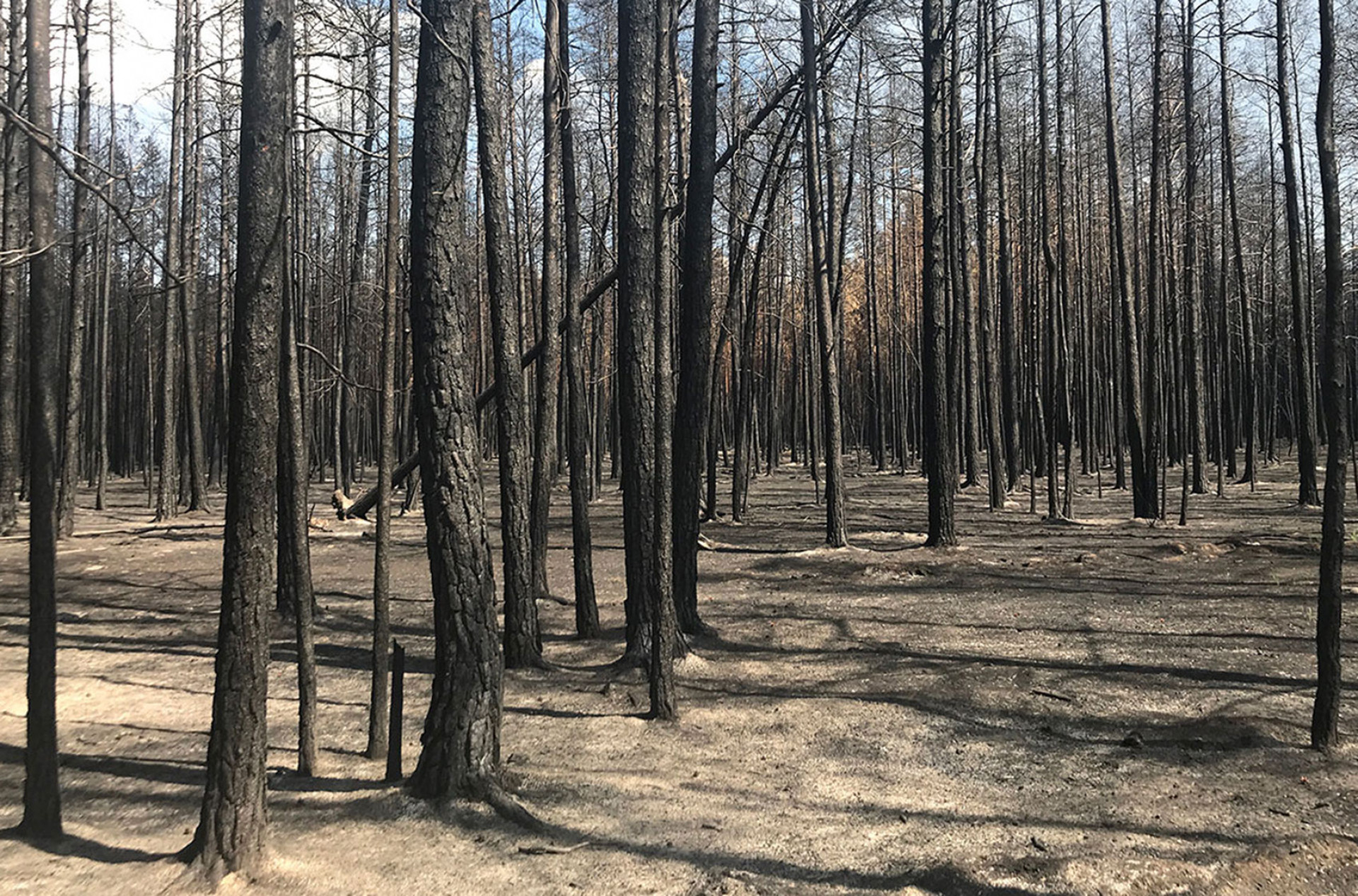 For miles around Dzhabyk, the forests are charred black. Felix Light / MT 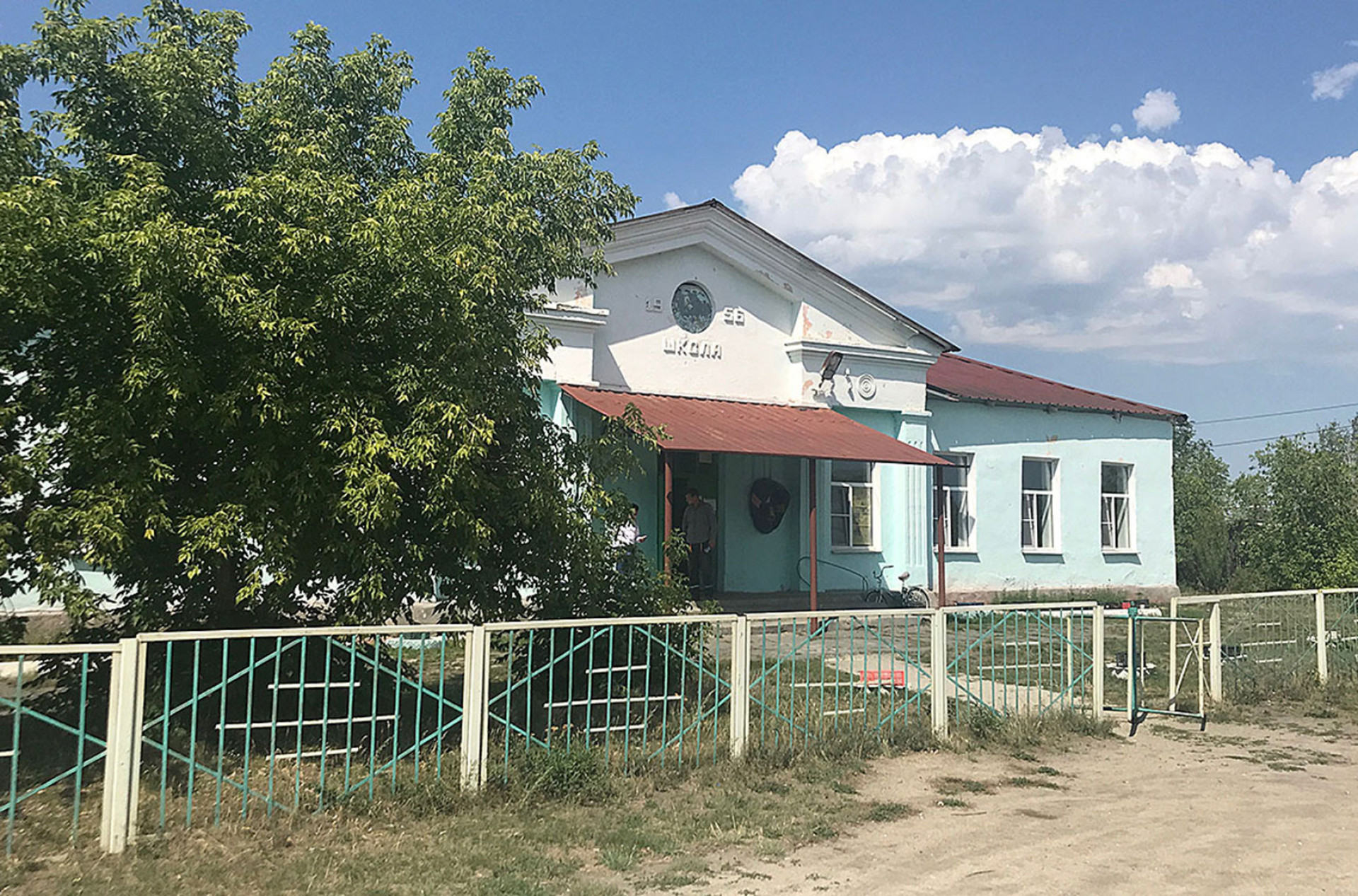 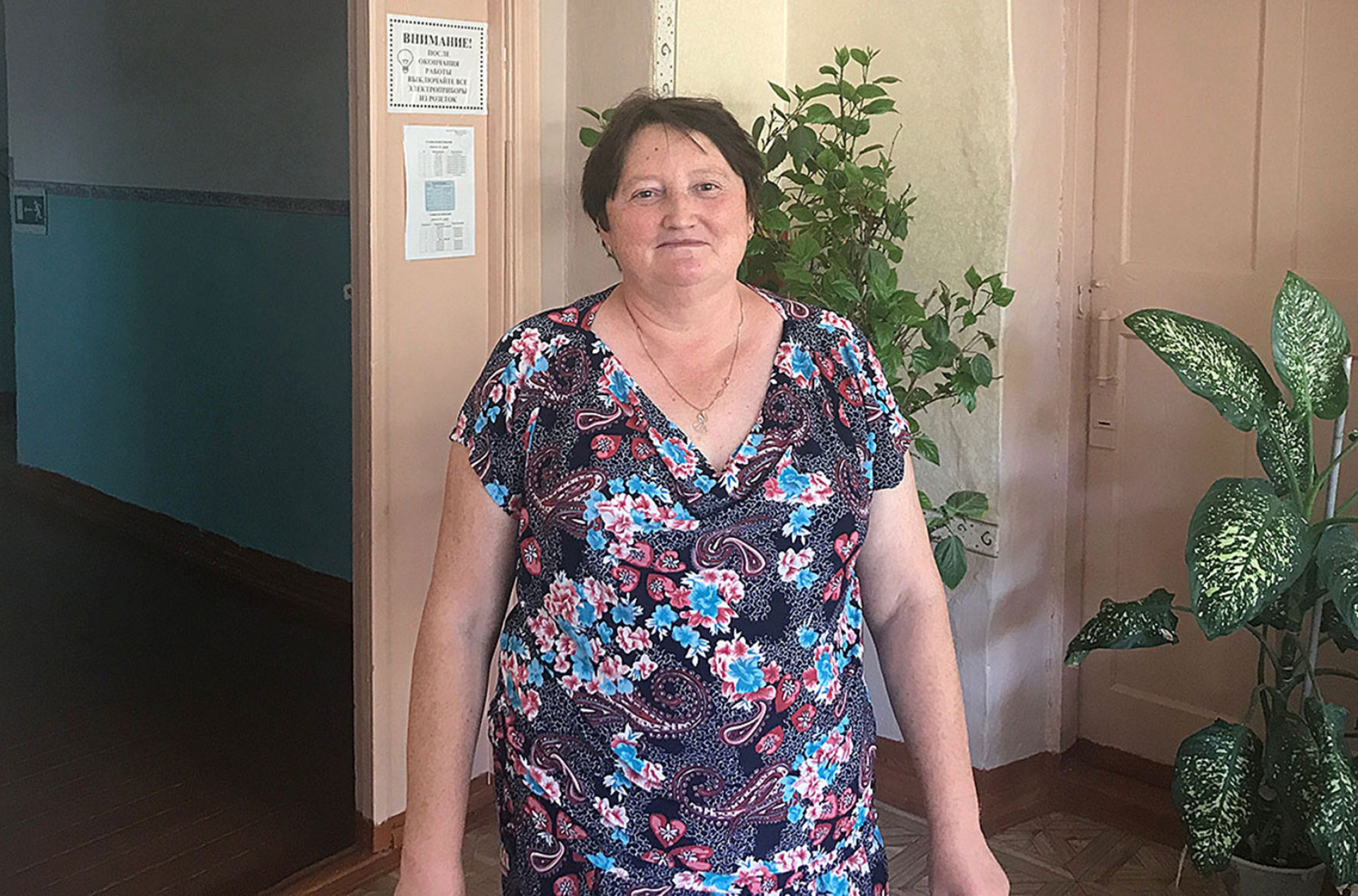 School principal Tatiana Korovchenko does not fear a repeat of the wildfires in future. Felix Light / MT 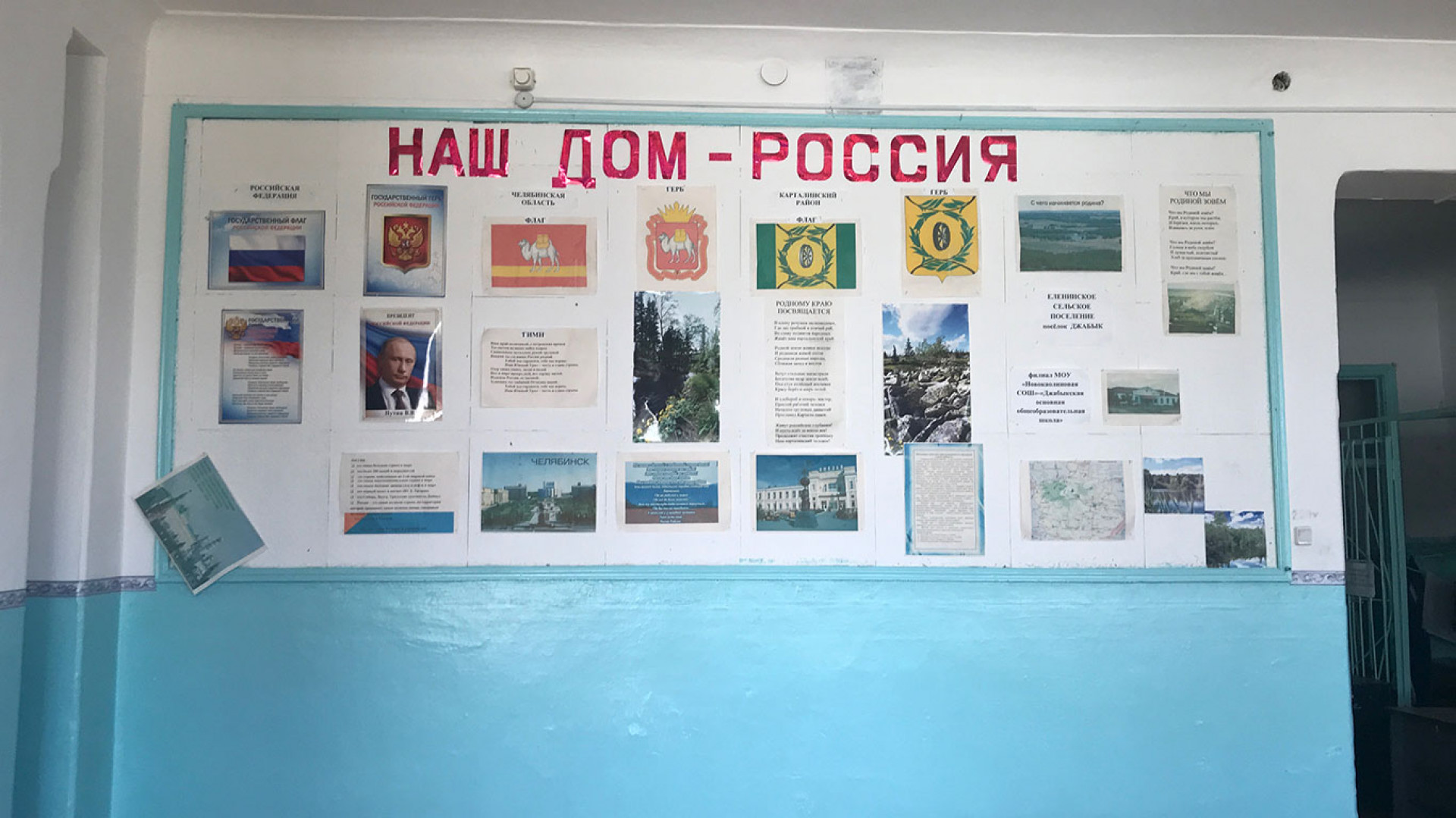 With climate change an increasingly high-profile issue in Russia, officials have been keen to signal their concern over the summer’s runaway wildfires.

In the days after the blazes burned themselves out, a stream of top officials, from the regional governor to Russian President Vladimir Putin’s personal envoy to the Urals made pilgrimages to fire-stricken Dzhabyk.

In the aftermath of the fires, with tensions running high, the regional prosecutor’s office announced that three criminal cases into potential arson charges had been opened.

An Aug. 10 presidential decree mandated beefed-up forestry services and swift compensation for those affected by the fires in Yakutia and Chelyabinsk Region.

When The Moscow Times visited Dzhabyk, reconstruction was in full swing, with building contractors hired by the local authorities rebuilding the worst-hit parts of the village.

On Aug. 6, Putin himself paid his own much-publicised visit to the region. Though he declined to visit Dzhabyk itself, the president took a helicopter flight over the scorched village and ordered the regional governor to tarmac the dirt track it relies upon.

It was a sign of how serious the issue of wildfires — which have dominated Russian media throughout the summer and covered much of the country in acrid smog — has become for the Kremlin.

For the residents of Dzhabyk, the sudden spike in official attention has been at once welcome and confusing.

“I’ve worked here for forty years, and in all that time I’ve never seen so many officials as I have since the fires,” said school principal Tatiana Korovchenko, 58, in an interview in the rundown, Stalin-era schoolhouse that caters to Dzhabyk’s few dozen school-age students.

Even so, Putin’s remarks that the Dzhabyk fires were the result of a warming climate that will inevitably cause more such disasters arouse little concern in locals accustomed to seasonal blazes.

“I’m not scared of it happening again,” said Korovchenko, whose school served as a makeshift headquarters for the emergency services, and who credits the authorities with a rapid response to this year’s disaster.

Though experts say wildfires will continue without major investment into sustainable forest management, Korovchenko — who lived through a spate of large wildfires in the 1990s — is undisturbed by the years-long streak of longer, hotter summers.

“Come what may, life goes on. We’ve had close shaves before,” she said.

However, in spite of the attention lavished on Dzhabyk, not all residents are happy with the official response.

In Zapasnoe, a smaller village located nine kilometers of fire-blackened forest from Dzhabyk, 72-year-old retired railroad worker Ivan Nikolaev and his wife Tamara have been living in a neighbour’s one-room summerhouse since the blazes destroyed their house, toolshed, and sauna along with all their possessions.

Carried by high winds that changed direction minute-by-minute, carrying embers across roads and rivers alike, the fires zig-zagged through Zapasnoe, wiping out some houses while leaving others intact.

“They just let it happen,” said Nikolaev, who remembers forest fires that were extinguished on time in years past and blames the emergency services for their failure to do so this year.

“It burned for days until it reached the village.”

Now left with nothing, Ivan and Tamara are waiting for a promised 100,000 Ruble ($1300) one-time payout, and a pledge to rebuild their house before winter sets in.

Nikolaev has little trust in the local officials who led the response to the fires.

“They say they’ll rebuild the house before Oct. 1, but I think we’ll see in the winter without a home,” he said.

Yet even as the pair have little faith in the local administration or the emergency services, they — like many of their neighbours — are optimistic that the president will ensure justice is ultimately done.

“I want you to know that we believe in our Putin,” said Tamara.

“We believe in our president, and in our governor. They’ll get this sorted out.”

Business lobby groups have been at the heart of efforts to persuade the government to soften regulations on emissions and pollution standards.
'ecocide' threat

The Cold Calculus Behind Putin’s Lukewarm Embrace of Paris Pact

Putin used to joke about rising temperatures being good for minks and sables, but he’s not laughing anymore.