It could have been a scene straight out of The Sopranos. On Saturday, 15 cars rocked up to the Khovanskoye cemetery on the southwestern outskirts of Moscow. Dozens of men poured out, dressed in tracksuits and brandishing Kalashnikov rifles and other weapons.

What followed was a bizarre 90-minute battle among gravestones. A group of cemetery workers fought off the invaders with work tools, including shovels, hedge scissors and crowbars. According to official estimates, around 200 people participated in the fight, but witnesses say up to 500 people were involved.

As the dust settled, police put the death toll at three, all Tajik citizens. A source with connections to the cemetery staff told The Moscow Times that in fact around twenty people could have been killed, most of whom were illegal migrants.

Three days after the incident, order had been restored to the neat lines of burial plots at Khovanskoye. The corpse filmed lying on the cemetery's parking lot tarmac had been removed. And there was no trace of the debris and battered cars captured earlier by cameras. But many worry it is a sign that the combination of ethnic tensions and an economic crisis will bring back the 1990s-style turf wars the capital thought were a thing of the past. 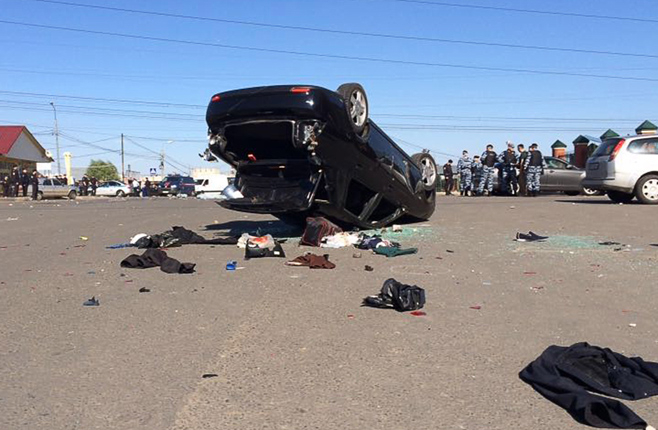 Cars and debris are left lying on the tarmac, following the brawl on May 14.

Russian media outlets were quick to point to an ethnic component in the dispute. Official reports had identified the attackers as hailing from Russia's North Caucasus region and those who had resisted them as being migrants from Central Asia. Later media reports specified the attackers as citizens from the Russian republics of Chechnya and Dagestan.

According to one version of events, the attack on illegal migrants from ex-Soviet states Tajikistan, Uzbekistan and Moldova was a spat over jobs. Migrants from mainly Tajikistan have traditionally found work in the capital's cemeteries by providing services like mending enclosures around burial plots or refreshing flowers. Some are officially employed by the cemetery. Most are not.

At Khovanskoye, a lone staff worker digging a grave said that more than 100 illegal migrant Tajik workers had fled following tighter police control in the days following the brawl. He seemed unfazed by the change and called the Tajik workers "swindlers."

The incident has led to scare-mongering that migrant workers could cause unrest as Moscow's job market suffers from an economic slowdown. Already, there have been calls for stricter visa regimes or closing the border entirely to migrant workers from Central Asia. And one politician compared Moscow's future to the so-called migrant crisis experienced by Europe. Presumably referring to large-scale sexual assaults and robberies by men of North African and Arab appearance in Germany's Cologne on New Year's Eve, deputy speaker of the State Duma and a member of the ultranationalist LDPR party Igor Lebedev said: "We need to act now or we'll be looking at a Munich situation," the Interfax news agency reported.

But Gavkhar Dzhurayeva, head of the Migration and Law Center, warns of xenophobia. She says media and politicians are quick to pin the blame on migrants. But the problem lies elsewhere. The migrants who had been working at the cemetery formed just a small part of a sector fraught with criminality."They are the victims," she said. 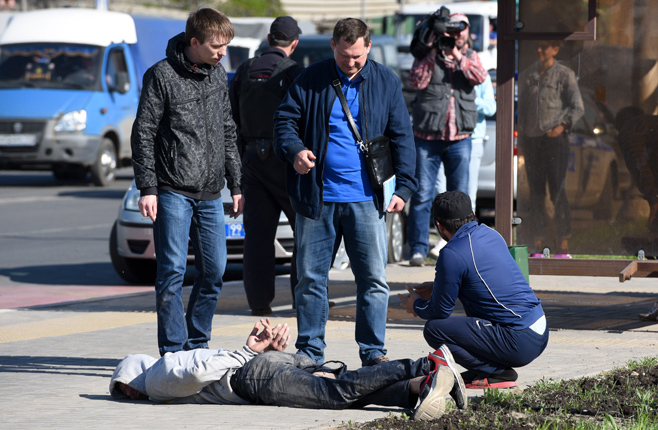 More than 100 people were detained by police following the brawl at the cemetery. Detainees included citizens from former Soviet states Tajikistan and Uzbekistan, as well as Chechens from the Russian republic in the North Caucasus.

A cemetery visitor who declined to give his name confirmed he had been approached by Tajik men in the past. They had offered to upgrade his father's grave for 10,000 rubles ($153), a price he found much too expensive. But from the moment his father passed away three years ago, he's had many such shady offers, he said. It is a symptom of what Alexei Suloyev, vice president of the Russian Union of Burial Organizations and Crematoriums, calls a sector dominated by corruption on every level.

Officially, the state-owned burial company Ritual has a monopoly over the capital's funeral services. But up to 80 percent of the sector operates in the shadows, says Suloyev. Medical personnel will leak the personal details of the recently deceased for 20,000 rubles, for example. This "funeral informant" business in Moscow alone is worth about 1 billion rubles annually, he said.

Migrant workers form only a small part of that lucrative shadow business. Some of those who had participated in the Khovanskoye brawl told reporters that gangsters had recently demanded a "tribute" of as much as 90 percent of the cemetery's illegal workers' profits. They had reportedly refused and said Saturday's attack had been payback.

At least some of the attackers, and alleged extortioners, were Chechen. But it looks likely they might have been acting in cahoots with the cemetery's own management. The cemetery director Yury Chugayev has been detained on suspicion of having organized the attack, spokesman for the Investigative Committee Vladimir Markin told the Interfax news agency on Tuesday. Chugayev's predecessor was earlier removed from his post for illegally selling burial plots. Newcomer Chugayev might have wanted to rejig the status quo at the cemetery to line his own pockets, several sources told The Moscow Times. There was also a former policeman among the more than 100 people detained at the cemetery riot.

Suloyev predicted there would be many more of such "surprises" as the investigation into the brawl unravels.

While it seems clear enough that Saturday's unrest was — at least in part — financially motivated, it would be dangerous to abandon all ethnic considerations, argues Alexei Malashenko, an analyst at the Carnegie Moscow Center think tank.

"As much as we want to close our eyes to it, there are huge tensions within Moscow's Muslim community," he says. There is also strong group loyalty. Several sources told The Moscow Times that the Saturday brawl had evolved into a massive fight partly because Tajik migrants working at nearby markets had rushed to the aid of their compatriots.

According to Malashenko, the Khovanskoye brawl has put inter-ethnic relations on sharp and there is a high probability of  follow-up clashes. He said it was most likely that Chechens would be the first to light the fuse, describing the community as enjoying a sense of impunity under the leadership of Chechen strongman Ramzan Kadyrov, a protege of President Vladimir Putin.

Chechens have been involved in several intimidating attacks on the political opposition, and were implicated in the February 2015 murder of opposition politician Boris Nemtsov. Law enforcement tends to turn a blind eye to such acts of violence, says Malashenko: "Moscow authorities dealing with Chechens know very well that Kadyrov stands behind them," he said.

Following Saturday's fight, security has been increased at large cemeteries across the capital, the head of the city's trade and services department Alexei Nemeryuk has said. According to Yelena Andreyeva, acting director of Russia's Union of Funeral Organizations and Crematoriums, there is reason for concern. She says violence has become a frequent occurrence in the funeral services sector as rivals try to squeeze each other out of an increasingly competititve market. In recent months, incidents have included arson attacks and armed showdowns at shops offering funeral services and cemeteries, though none have been as large as the Khovanskoye fight, she said.

With practically no regulation in the sector, almost anyone can offer funeral services in Russia. And as the country goes through a credit crunch, hitting small and mid-size businesses hard, many are moving into the burial business to try their luck at what seems a safe bet.

As Andreyeva says, crisis or no crisis, "people will continue dying."

Russian investigators believe that financial motives were behind the deadly altercation in Moscow's Khovanskoye Cemetery on Saturday, Investigative Committee...
news

Moscow's Presnensky district court has issued an arrest warrant for 12 participants in a mass brawl that erupted Saturday at the city’s Khovanskoye Cemetery...
deep freeze