Contribute Today
By Olivia Bagnall
May 5, 2016

The Solzhenitsyn House of the Russian Diaspora is hosting a new exhibit that celebrates the work of Antonina Woronyn and Alexandra Kramorow, two Russian sisters born to an aristocratic Russian family who fled during the Revolution. The exhibit, entitled "School of Two Sisters" came about thanks to the efforts of Antonina W. Bouis, an accomplished English-Russian translator and daughter of Antonina Woronyn. As a young girl she grew up observing her mother and aunt working in their art studio in New York. Bouis says that despite coming to New York during the first wave of immigration and remaining there for the majority of their lives, her mother and aunt always felt incredibly close to their Russian roots and longed to return to their country one day. "For their whole lives, they felt Russian, loved Russia and thought only about Russia." Now art lovers in Moscow can see their paintings and learn about their extraordinary lives.

The exhibit is modest in size, and yet there is a great deal to see. Family photographs, letters and old advertisements for their work from New York are all on display alongside their paintings. Visitors get a great sense of the lives of Antonina and Alexandra, as well as a thorough look at their art.

The Story Behind the Art

In the words of Bouis, their story is one of "enduring faith, indomitable will, the lasting power of art and the cycle of history." Born to a noble Russian family in the late 20th century, Antonina and Alexandra grew up in a lavish apartment in St. Petersburg surrounded by servants, finery and parents who were great lovers and supporters of Russian culture and art. They were raised with a great sense of pride in their heritage and a creative spirit. In 1917 their life came to an abrupt halt when the Bolsheviks took away their duplex St. Petersburg apartment along with their jewels, art and furniture and moved the entire family into a one room flat — standard treatment at the time. Four years later, in 1921, after realizing that there was no end in sight to the perils of war and the new regime, the family fled to Poland where they had property.

Both Antonina and Alexandra studied at the Warsaw Academy of Arts before establishing their first studio in Poland. In Warsaw their father died, and the children and widow managed to survive World War II in a torn and ravaged Poland. They fled the Soviets once more when the Red Army moved in and took refuge in Germany, where their mother eventually passed away. Germany remained their home for some time. Antonina and Alexandra taught there, married, and in 1950 moved to America. Having found their feet in New York, the sisters and their Russian husbands became citizens yet continued to live in tight-knit Russian communities, holding onto their heritage. Bouis' father directed Russian plays, they attended a Russian Orthodox church, spoke only Russian at home and socialized with other Russian emigrants of aristocratic backgrounds who had fled their homeland either during the revolution or the war. 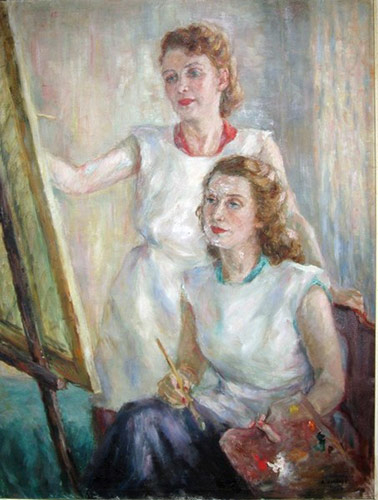 A Double Portrait by the sisters Alexandra Kramorow and Antonina Woronyn

Alexandra and Antonina became art teachers in a local art school in Queens which later became known as "The Two Sisters Studio." Later they exhibited work with the Russian-American artists association, Le Cercle Artistique Francais and the National Academy. According to Bouis, who was born and raised in New York, the sisters "always had Russia in their minds and in their hearts" and "their paintings always had a Russian spirit, as if imbued with Russian sunlight."

Both classically trained, Antonina and Alexandra were so akin that they even worked on the same canvases at the same time, both contributing to the painting as though working as one mind. Their double portrait, in which Antonina painted Alexandra on one canvas while Alexandra painted Antonina, is a testament to how harmoniously these siblings worked together. It is almost impossible to see the differences in style between their two portraits: every brush stroke blends perfectly into the next, as if the portrait was done by one fluid hand.

Alexandra passed away in New York in 1978. Antonina continued painting, and in 1988, after 65 years away from her home, decided it was safe to visit the Soviet Union. She was greeted as a treasure of the old regime. At the height of perestroika, people were welcoming the collapse of communism and felt nostalgic for pre-revolutionary Russia. Antonina, indeed, embodied the rich cultural values that Russia once had — and denigrated and destroyed for decades. Bouis recalls Antonina telling a television interviewer, "I find it amusing that you are interested in us now for the same reasons you used to kill us." She returned to her beloved Russia many times in her eighties, once for the Russian exhibition of the sisters' paintings at the fine arts museum in Yaroslavl, where her mother's family once had property.

Among the many glittering exhibitions of 20th century art in Moscow right now, this show is like a small, authentic gem. The exhibition runs until May 23.

Muchnik's Picks: Dasha Shults, Detsl and More Music in Moscow on the Weekend

We are in the middle of the May holidays and the streets seem half-empty as many Muscovites left the city for a short vacation, taking advantage of a...
news

Twin Exhibitions in Moscow Celebrate the Work of Viktor Pivovarov

Viktor Pivovarov turns eighty next year, and to commemorate this anniversary the Pushkin Museum of Fine Arts and Garage Museum of Contemporary Arts...
news

Edouard Manet's painting of a nude woman reclining on a bed shocked and scandalized the French public when it was first exhibited at the 1865 Paris...
soviet callback