Contribute Today
By Andrei Muchnik
May 2, 2016

Viktor Pivovarov turns eighty next year, and to commemorate this anniversary the Pushkin Museum of Fine Arts and Garage Museum of Contemporary Arts are simultaneously holding complementary shows of his works in Moscow, the artist's hometown.

Viktor Pivovarov was born in Moscow in 1937 but moved to Prague in 1982 and has lived and worked there since. He's considered one of the key members of the conceptualist movement, along with Erik Bulatov, Ilya Kabakov, and Andrei Monastyrsky.

The largest exhibition is at the Garage Museum of Contemporary Art. It's called "The Snail's Trail" and it's more of an installation than a regular retrospective. When asked about the title of the exhibition, Pivovarov said: "To me, the image of a snail with its shell coiled inward is a metaphor for the entire exhibition and for the introvert's mind, spiraling deeper and deeper into the cosmos that is a human being."

At the Garage Museum, the viewer is immersed into that interior cosmos, traveling from one room to another that are each devoted to a separate theme in Pivovarov's oeuvre from the mid-1970s to 2015. The artist himself wrote the exhibition guide, which helps the viewer on this journey.

The eleven rooms house such different works as the series "Projects for a Lonely Person" (1975), which includes charts on every aspect of lonely person's life; "The Sutra of Doubts and Fears" (2006), the artist's reflection on fears of both death and life; and the "Eidos" series (2000–2009), an exploration of Plato's world of ideas. 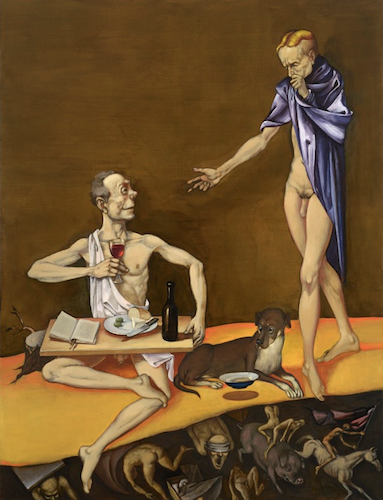 Philosophy Dog, painted in 2015, is part of Pivovarov's homage, of sorts, to the masters of the Northern Renaissance.

Pivovarov's parallel exhibition "Lost Keys" at the Pushkin State Museum of Fine Arts is small compared to the one at the Garage Museum but continues where the former leaves off. The painting that the Garage exhibition is named after, "The Snail's Trail" can be viewed here, along with eleven other paintings

Inspired by the Dutch masters of the 16th and 17th centuries, the so-called Northern Renaissance, "Lost Keys" attempt to establish a dialogue between the classical and the contemporary. It's significant that Pivovarov's exhibition runs at the same time as a show of works by Lukas Cranach the Elder and severals subsequent generations of his family.

Pivovarov notes that "these are free associations about Old Masters. The series turns out to be very powerful, and I think, if I am not wrong, that these are my best works after the "Projects for a Lonely Man."