Children wearing brightly-colored cardboard wings play and talk with family members in their rooms. A little girl sits with a teacher at a desk going through a lesson. The atmosphere is lively, the activities everyday, but this isn't a school or a play area. This is the Speransky Children's Hospital, and the children here are all patients receiving treatment for severe burns.

On May 21 the Speransky Children's Hospital Fund will be holding a unique 24-hour charity race to raise funds for their work. The "1000 kilometers of Love" race will be held in Gorky Park, where participants will sign up for a specific time slot and run 5km or more in support of the charity. Entrance costs 1000 rubles — which goes straight to the charity — while participants are encouraged to ask friends and family to sponsor them to raise additional funds.

The charity provides play specialists, art therapists and psychologists to support the psychological and social rehabilitation of children after they suffer burns. "Today we have been making wings with the children. They have been having lots of fun running down the corridors pretending to be fairies or demons," said Olga Feldberg, a play specialist from the Speransky Children's Hospital Fund. The monotony of treatment can be hard on children. "Every day is the same in hospital. That is why it's important for children to have fun and to have a creative outlet for their energy and their feelings," said Feldberg.

The fund also supports parents in difficult financial situations with the ongoing medical costs associated with having a child who has suffered burns. "Burn survivors need to wear special compression garments to help the scar tissue heal. A set of compression garments can cost $100, which might well be half of someone's monthly salary. When a child is growing and new garments need to be bought several times, the costs mount up. Some families are simply unable to afford the correct equipment to care for their child," said Mikhail Kazbekov, director of the Speransky Children's Hospital Fund.

"Before the economic crisis we predominantly relied on corporate sponsors. But since then due to cuts in funding and the depreciation of the ruble, our income has been effectively cut four times," said Kazbekov. The fund now relies largely on private and individual donations to maintain their existing rehabilitation services. This year, for example, the race has been organized with support from Ruslan Radzhapov, head of the group of Correa's restaurants.

Radzhapov's friends and colleagues will act as pacemakers for the event. 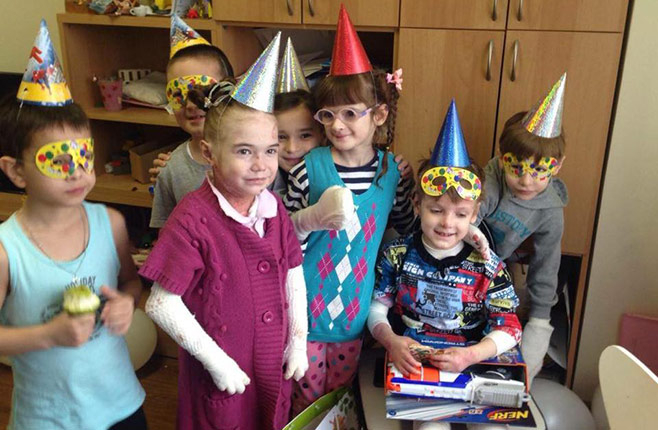 Children have fun at a party organized by the charity. Events like this break up the boredom of long stays in hospital.

Burns are a huge issue in Russia. "Incidents of burns are 10 times higher in Russia than in Western countries," Kazbekov said. "This is due to a number of factors: poor housing maintenance, faulty wiring, higher levels of smoking, bad central heating and burns that occur due to negligence when children are left unattended by alcoholic caregivers."

Many cases however, are down to pure bad luck. Igor, 2 1/2 years old, is currently in an intensive care unit at the hospital following a house fire at his village in Russia's Far East. He was living with his parents, grandmother and three siblings when their wooden townhouse caught alight. With burns on 80 percent of his body, he initially wasn't expected to survive. A private donor has paid for a flat near the hospital so that Igor's mother can be on hand to support him, but the journey ahead will be a long and difficult one.

"Our psychologists also work with the parents of children in the hospital's care," said Alla Pochtar, one of the charity's project coordinators. "Parents have to learn how to cope with the guilt they feel over their child's injury, as well as the ongoing struggle of caring for a child with severe burns." 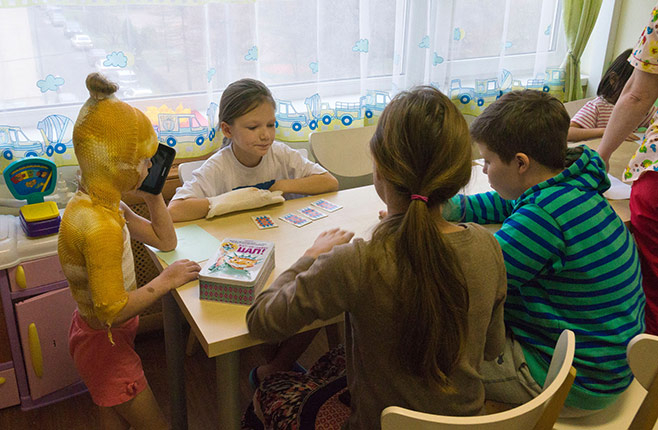 Children play in a playroom equipped and staffed by the charity. The playroom is a place to escape the hospital and let children use their creativity and imagination.

It is clear that support from the charity is often a lifeline to families in the darkest period following a serious incident. A letter to the Speransky Children's Hospital Fund from the parents of children who had benefited from the work of the charity highlighted this.

"My boys suffered burns. The oldest was 10 years old and the youngest 10 months. I can hardly imagine how we would have survived this time without the wonderful playroom and the incredibly kind people who work there. In the morning the children would crowd in front of the playroom's door asking if the play therapists were coming in, because they were the magicians who open the treasured door with a magic key. During the hours spent with the play therapists the children would forget about their injuries and enjoy spending time playing. "

Outside of the playrooms, the fund organizes trips to aqua parks and sports centers for the children. The idea is to encourage them to adapt and engage with the outside world and understand that their injuries should not limit them. "Children with severely burned hands may think that they can't do activities like rock climbing, but they can. We want to encourage them to build their confidence again. Whether it is through being brave enough to change into a swim suit or playing sports," said Pochtar. 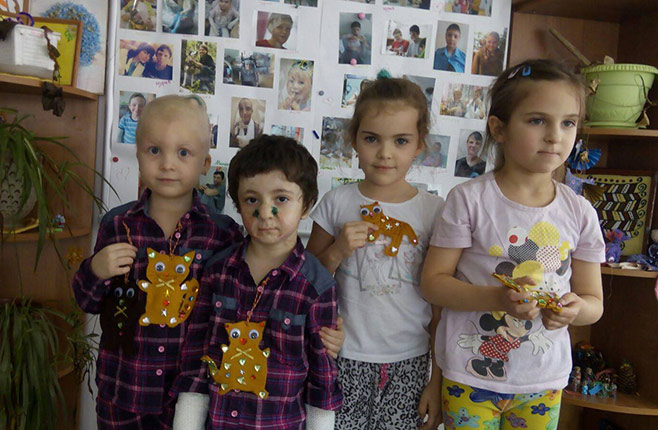 Children enjoying an art therapy session from an employee funded by the charity.

This summer the fund is organizing a Medieval-themed summer camp in Belarus for 25 children. "It's about giving children back the feeling they are children. Or for the adolescents at our camps — giving them the right to have 'normal' adolescent problems and worries that aren't necessarily about their burns," said Pochtar.

The race on May 21, to which organizers hope to draw 200 runners, is vital for raising the funds needed to pay for the art supplies, equipment and specialists that support the children in their rehabilitation. "We had a 13-year-old boy who came to the hospital after an explosion involving fire lighting fluid. After discharge, he wouldn't leave home and sank into a deep depression. We encouraged him to come to the summer camp and at the end he cried because he didn't want to leave. On his return home, the boy had a renewed confidence and returned to school," said Pochtar.

"We would love to do even more for the children in our care. That is why this charity event is so important," said Kazbekov.

The charity race "1000 km of Love," will begin on May 21 at 10 a.m. To sign up for the race and find out more about the work for the Speransky Hospital Fund, go to childhospital.ru/zabeg.