Tonight Shakespeare Lives kicks off. The festival, which forms part of the U.K.-Russia Year of Language and Literature and coincides with the 400th anniversary of Shakespeare's death, involves the live streaming of a concert from Stratford-upon-Avon, a unique exhibition at Domodedovo airport, "Shakespeare Day" in schools across Russia and much more besides. Shakespeare Lives also features the opening of a historic portrait exchange "Elizabeth to Victoria" at the Tretyakov Gallery on Saturday, where a rare portrait of Shakespeare will be on display for the first time in Moscow.

"Shakespeare doesn’t just belong to Britain – he belongs to the world, and he certainly belongs to Russia – and his themes are as relevant in the 21st century as they were in the 16th century," said Michael Bird, director of the British Council in Russia in a written statement to The Moscow Times. "Our program for the Year will move from Shakespeare to contemporary British writers, and our focus on language will include the future of the word. We want to offer something for everyone," he wrote. And the varied program certainly does offer something for thespians young and old. Here's a rundown of what you should look out for over the next couple of days.

Shakespeare Day Live, will be broadcast over the internet live from London, starting at 9:30 p.m. Moscow time with a broadcast of the concert "Ode to Shakespeare" from the Holy Trinity Church in Stratford-upon-Avon. Events will continue into Saturday with appearances from famous actors, musicians and artists including Sir Ian McKellen, David Tennant, Carol Ann Duffy and Germaine Greer. The dazzling program includes an online exclusive of David Tennant's acclaimed performance in Richard II, a visit to the Globe and insights from leading Shakespeare scholars.

A detailed program of the festival is available at bbc.co.uk/shakespearelives.

Art at the Airport

On Saturday visitors and passengers at Domodedovo airport will be able to visit a unique exhibition dedicated to the life and works of William Shakespeare. Photographers from around the world contributed photographic interpretations of the bard's plays in interesting and unusual contexts to show the universality of his legacy. The works show Shakespeare's enduring influence in the modern world.

The exhibition will be on display on the first floor of Domodedovo until June 30. 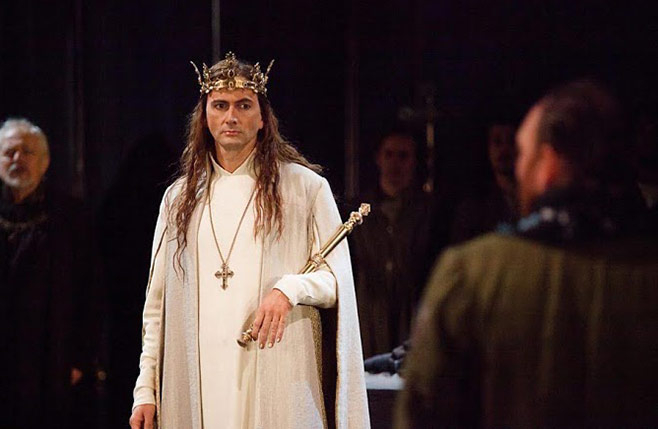 On Saturday there will be a live streaming of a special concert in Stratford-upon-Avon to celebrate the 400th anniversary of Shakespeare's death. The concert will feature appearances from David Tenant, Sir Ian McKellen, Judi Dench and Joseph Fiennes. Watch out for a pyrotechnic show in the in square in front of the theater involving 10 portraits of Shakespeare.

The live English-language broadcast will be shown at 9:30 p.m. at Moscow's Formula Kino Prague.

On Monday across Russia school children will be participating in special events, poetry readings and lessons to celebrate the great playwright.

On Monday the British Council's literary translation kicks off. Participants will be asked to translate excerpts from never before translated British authors into Russian. The aim is to acquaint Russian readers with previously unknown British literature. The competition will close on September 1.

For more information about all events see the British Council website: britishcouncil.ru.

An unprecedented portrait exchange between Russia's State Tretyakov Gallery and the UK's National Portrait Gallery is underway. To mark their joint...
news

Into theater and love a quirky romance? This Sunday the Mayakovsky Theater will host "Constellations," an award-winning play from the Moscow English...
news

Are your spirits a bit low? Desperate for spring? Need a pick-me-up? You're in luck. On Sunday Stadium Live is hosting the 5th annual Best Buddies...
Long read