The Best of Russia 2015, an exhibition covering the people, places and events of the past year, has opened at the Winzavod Center for Contemporary Art. The nationwide project, which encourages entries from amateurs and professionals, will travel on to Perm, Novosibirsk and Kalingrad later in the year.

A Year of Russian Life

The project, established by Winzavod in 2008, attracted 25,239 entries from 569 cities and towns across five categories. The goal? To capture a year in the life of Russia through powerful, creative and thought-provoking photography.

The current exhibition showcases the best 294 photographs, which are split across the categories: "People. Events. Everyday Life"; "Nature"; "Architecture"; "Style" and "War and Peace Inside of Us." The only entry criterion for entry is that photos must be taken in Russia, resulting in a great diversity of the ages, backgrounds and nationalities of the photographers.

“Almost every second visitor of the Winzavod Center for Contemporary Art likes photography. Today people take good pictures not only with a professional camera, but also with a smartphone," said Sofia Trotsenko, President of Winzavod, in a written statement to The Moscow Times. "That’s why one of the main aims of the exhibit is to create a system of supporting little–known but talented photographers by allowing them to participate in an exhibit together with prominent masters of the art.” 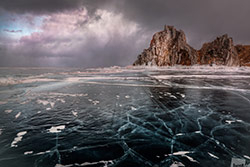 Entering the exhibition hall, you first pass the “Style” and “Architecture” categories. The former showcases Russian fashion photography and the latter the skyscrapers, apartment buildings and orthodox churches that form Russia's cityscapes.

"Nature" is without doubt the most visually stunning of categories on show. While it's common knowledge that Russia is the biggest country in the world, it's perhaps only through images of its vast, largely unchartered territories that you can begin to grasp what that actually means.

Breathtaking photos of Kamchatka's wild volcanic terrain sit alongside a view of Lake Baikal from Olkhon Island and a stunning aerial shot of the Altai mountain range. A photograph entitled "MARS I" by Sergei Semyonov perfectly encapsulates the other-worldliness of the landscape surrounding Ulagan, a village in deepest Siberia. "Nature" also includes dozens of photos that Russia's extraordinary wildlife. The quality and definition of the close-ups belies the hours and days many of the photographers must have spent waiting for the right lighting and timing to catch their subjects in the wild.

Anastasia, from Moscow, came to the exhibition with her son Alexei, 4. "I've been really enchanted by the photographs, particularly their bright colors and beautiful locations. My son was a little bit bored at first but he loves the animals." When asked about his favorite photo, Alexei doesn't hesitate. He points to a photograph by Dmitry Arkhilov of an inquisitive-looking adolescent brown bear taken in the Republic of Karelia. "That one, because it looks like it wants to play." 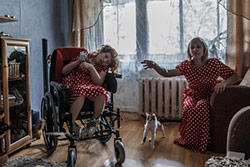 "People. Events. Everyday Life" is by far the largest category on display, and takes up a separate floor of exhibition space. Here you see the faces of Russians from all corners of the country — a reindeer herder in Khatanga, a war veteran in Tayga and a group of first-graders at their school cafeteria in Moscow. A series entitled "Single mothers raising disabled children" sheds light on the everyday struggle and resilience of families in trying personal circumstances. Photos in this category are accompanied by quotes or explanations to provide context for visitors.

A second powerful series focuses on the Boris Nemstov memorial march that took place after the politician's death in 2015. The open grief and public mourning resonate with images many visitors will have seen on the internet and social networks from the first anniversary march at the end of February this year. Other photographs mark traditional landmarks in the Russian calendar — Victory Day, Russian Orthodox Epiphany and the Spasskaya Tower Military Music Festival.

A World Tired of War 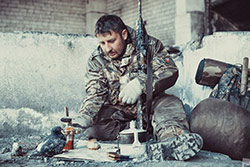 The theme for this year's special category was "War and Peace Inside of Us." The selected pictures highlight the effect conflict and war have had on individuals and on society at a wider level. Photographs capture the reburial of soldiers from the Battle of Stalingrad, a special forces fighter covered in sweat and blood battling to achieve a maroon beret (a high military honor) and one of the most iconic images from the exhibition — a soldier holding a gun in one hand and tenderly feeding a bird bread with the other. The picture is called "The World is Tired of War."

Aleksandr Budberg, a journalist, columnist and one of the exhibition's curators, spoke about the aim of the "War and Peace Inside of Us" category. "We have to catch this elusive 'decisive moment' that will show and explain everything. Express it all at the end of the day. This 'decisive moment' is individual for all of us separately. But when there are many of them, we can come closer to the answer: what side of the front are we on; what to expect, what to fear and what to hope for? Where is our war and where is our peace?” he said in a written statement to The Moscow Times. The photos in this series certainly raise more questions than they answer, with the retrospective putting in sharp focus the toll conflict has had on ordinary Russian people.

The overwhelming feeling the encyclopedic exhibition leaves you with is a sense of Russia's vastness. And its multiplicity —in terms of lifestyles, landscapes and livelihoods. "I am from Moscow and although I consider myself well-travelled, this exhibition has made me realize how little of Russia I know about. Some of the photos seemed familiar to me and made me smile or experience sadness. Others seem so incredible I almost wouldn't recognize my own country," said Alyona, a visitor to the exhibition.

It is perhaps the ability of photography to capture both the everyday and the extraordinary that has made Best of Russia such a powerful and enduring project. Judging from the rapt looks on the faces of visitors at Winzavod, the project has an enduring hold on Russians and foreigners alike.

Best of Russia 2015 will be on show at the Winzavod Center for Contemporary Art until May 1. 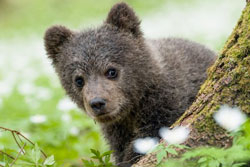 A new exhibition at the Gallery of Classical Photography displays images from Russia's leading wildlife photographers. Over 70 photographs are on show, featuring images of the country's most remote landscapes, beautiful scenery and extraordinary wildlife. Photographers include Michael Korostelev, who spent 3 months in the Far East of Russia photographing brown bears, orcas and walruses, as well as 360 aerial panoramas from AirPano, a non-profit project which specializes in photographing the most uninhabited areas of the world. Watch out for Gennady Yushin's series of photographs from Kamchatka, which capture the daily lives of foxes, sea lions and bears in vivid detail. The stunning photographs will wow kids and adults alike. Until May 8. 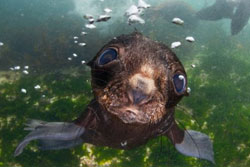 Before you leave the Gallery, be sure to pause by the digital monitors showing the short-listed photographs in the Sony World Photography Awards contest, organized by the World Photo Organization. Almost 300 photographs from 60 countries are on display, including a short-listed photo called Sea Baby taken by Russian Andrei Marchuk, the editor of Wild Magazine. This year the organizers added categories of art and documentary photography. The world in all its variety, horror, and majesty are on display. Winners will be announced on April 21. Until March 27.

The first month of spring is nearing its end, but outside it still feels like February. If this is your first winter in the Russian capital, follow...
news

I only got into Ladurée on my second attempt more than two weeks after its opening. Ladurée Moscow is located in the largely expat neighborhood of Patriarch's...
weekend kitchen