The latest temporary exhibit at the The Pushkin Museum of Fine Arts is an unusual mix of modern photography and 200-year-old European portraiture. Although the product of modern technological advancements, Erwin Olaf's photographs are an interpretation of the past and transport the viewer back to 19th century Belgium.

The collection "An Homage to Louis Gallait" is a series of photographs that recreate the subjects of Gallait's famous work "The Last Honors paid to Counts Egmont and Horn." The painting, completed during the time of the Danish revolution, depicts a group of courtsmen paying their last respect to the remains of Counts Egmont and Horn after their brutal decapitation. While very few reproductions of the painting exist, The Pushkin Museum has one of the later copies on display alongside Olaf's photography.

At the request of the directors of Gaasbeek castle, a 13th-century castle and national museum in Flemish Belgium, respected Dutch photographer Erwin Olaf was tasked with honoring Gallait's famous painting through a modern interpretation. When approaching the project Olaf not only recreated the painting down to the last detail, but also took inspiration from the subjects of the work to create a series of independent portrait and still life photographs.

The costumes and backdrops of the portraits were meticulously researched to perfectly reflect the Belgian court at the time. The subjects of the portraits were also chosen based on their resemblance to the figures in Gallait's original work. Gazing at the enlarged and sharply focused images in the exhibition, it is easy to forget they are the work of a modern European photographer and not a 19th century court-painter. There is pleasing linearity between Olaf and Gallait's artistry — just as Gallait is known for reviving historical painting, so too is Olaf for creating the art of historical photography. 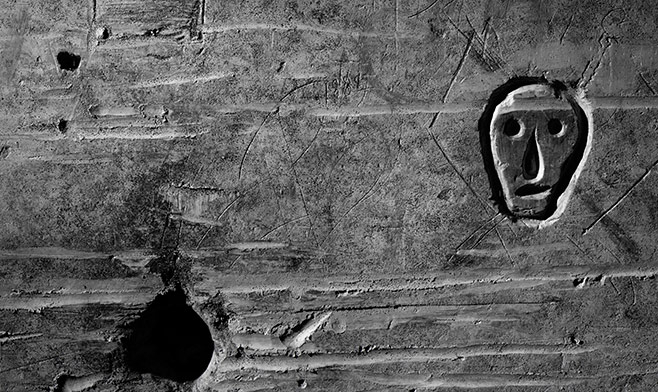 In his collection, "Light," Olaf pares down his usual theatrical style to highlight the naturally impressive subterranean structure.

Erwin Olaf and the Champagne Vaults

Erwin Olaf's versatility as an artist and skillful multidimensional style of work is evident in the exhibition. Alongside his homage to Gallait, visitors are also treated to a peak at his collection of images called "Light," the result of collaboration with Ruinart, the first established house of champagne in France.

Founded in 1729, the house of Ruinart has a long tradition of encouraging the distribution and development of contemporary art. Each year they choose to support one upcoming artist, inviting them to create a series of works that reflect the rich history of the legendary champagne house. In 2015 Erwin Olaf was that artist. He chose to celebrate the chalk vaults of the champagne house, which were controversially declared a UNESCO World Heritage Site last year. The vaults are a series of intersections and galleries 125 meters below the earth's surface that form a labyrinth several kilometers long. In his collection, "Light," Olaf pares down his usual theatrical style to highlight the naturally impressive subterranean structure. With no embellishments, color or apparent reworking, he dramatically captures the solid and imposing presence of the cellars' ancient stone walls. These photographs are now contrasted against the plaster casts of classical Greek sculpture in main atrium of the Pushkin Museum of Fine Arts.

Erwin Olaf, although little-known outside artistic circles, has had a varied career in photography, art and film. He was born in Holland in 1959 and lived and worked in Amsterdam after finishing school. In the first stages of his impressive career he worked as a photojournalist and studio photographer. He appeared on the international scene in 1988 when his photo series "Chessmen" took first prize in the Young European Photographer competition. In the same year he held his first exhibition in Germany. His photography and cinematography has always paid particular attention to the social issues facing 21st century Europe. Topics such as sexuality, social class, racial segregation and mental health were prevalent in early collections that had titles such as "Hope"(2005), "Rain"(2004) and "Grief" (2007).

Later on in his career, his work began to focus more on the interpretation of historical events, just as in his current "Homage to Louis Gallait" exhibition. A series called "The Siege and Relief of Leiden" (2011) marked this shift in subject matter. The series directed attention to the important events of the Eighty Year War between Holland, Britain and Spain. In 2010, the artist was also commissioned by the design house Louis Vuitton to create a series of work in the style of portraits from classic masters, setting him up to become an in-demand fashion photographer as well as an illustrious artist.

In Olaf's opinion, the interpretation of historical events allows us to better resolve the issues of today's modern society. This is why he strives to incorporate both themes into his art, with visually impressive effects.