Pussy Riot band rocker Maria Alyokhina's Los Angeles appearance last week not only drew an enthusiastic audience of 1,500 admirers but also gave her an opportunity to sell boxes of embroidered T-shirts at $30 each to benefit the cause of political prisoners.

As part of her American tour, Alyokhina was the featured panelist at the Center for the Art of Performance at UCLA (University of California in Los Angeles), moderated by Edward Goldman, a native of St. Petersburg.

The two-hour program consisted of a mixed bag of subject matter covering the featured guest's trials and tribulations as a Russian political activist, including a film clip from a documentary titled "Art and Punishment."

It followed a graphic slide presentation on Russian artist Pyotr Pavlensky, who is perhaps best known for sewing his mouth shut in protest against the incarceration of Pussy Riot members. He is currently in jail for setting on fire a door of the Federal Security Service in Moscow.

Billed as a conversation about "Art, Sex and Disobedience," Alyokhina mostly focused on Russian politics under President Putin, admitting that the system most likely will not change unless people get involved.

"There is no leader in the horizon to make the country free," she said.

She made it clear that her mission is to keep the story of the Pussy Rioters alive in an effort to focus attention on political prisoners. 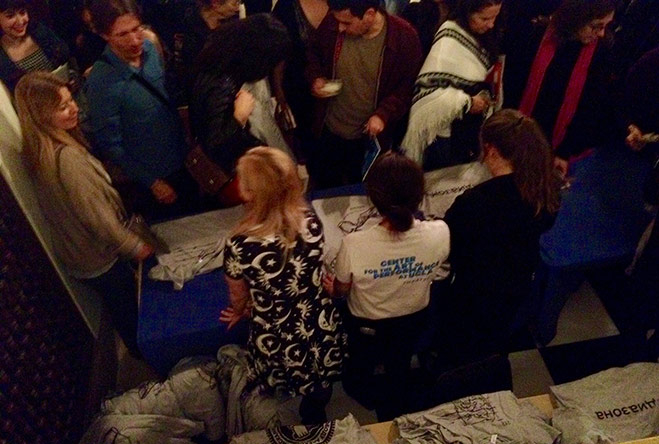 Alyokhina selling t-shirts to a big crowd in Los Angeles to support prisoners and their families around the world.

Questions posed by Goldman, a radio art review program host, mostly elicited details of the Russy Rioters' emergence as a activist group. The commentaries were mixed with Goldman's observations and experiences as a former employee of the famed Hermitage Museum in St. Petersburg, Russia, before his family emigrated to America in 1977.

Alyokhina told The Moscow Times that she is on a public appearances tour and will be in the United States several more days.

The 27-year-old Alyokhina and her fellow Pussy Riot member Nadezhda Tolokonnikova were convicted of "hooliganism motivated by religious hatred" in 2012. Upon their release at the end of 2014, they announced their intention to actively campaign for prisoners' rights.

This is Alyokhina's second trip to Hollywood. She and her co-rocker Tolokonnikova were present at the U.S. unveiling of their hour-long documentary "Pussy vs. Putin" in April 2014. Since then there have been rumors of some interest in the motion picture community to film the group's story. That has not materialized yet.

However, the controversial duo made their television debut when they appeared in the hit Netflix series "House of Cards."

Putin-Inspired Perfume on Sale in Moscow

Need a new image? Need a wardrobe overhaul? Or do you just love haute couture? We've got the fashion guide for you.