British screenwriter Andrew Davies is television's best English literature lecturer. He introduced homicidal British Prime Minister Francis Urquhart to BBC viewers in the "House of Cards" trilogy between 1990 and 1995. Just over two decades ago, a wet-shirted Colin Firth as Mr. Darcy captured the national imagination in Davies' version of "Pride and Prejudice," and suddenly Jane Austen was sexy again. He co-wrote the screenplays for "Bridget Jones's Diary" (2001) and its sequel "Bridget Jones: The Edge of Reason" (2004). His "Bleak House" in 2005 made Dickens relevant to a 21st-century audience, and the debt-themed "Little Dorrit" arrived on screens at the time of the 2008 financial crisis. "Mr. Selfridge" — about the early years of the London department store — another Davies creation, is now into its fourth season in Britain and the United States.

And now Davies has decided to bring a Russian classic to the small screen: Leo Tolstoy's "War and Peace." He distilled 600,000 words into a 6.5 hour television version for the BBC and the Weinstein Company. It was shot in spectacular locations — including the Catherine Palace in St. Petersburg — has meticulous production design, and an English-speaking cast that is joy to behold.

Davies spoke to The Moscow Times after the first two episodes were broadcast on the BBC and the U.S. broadcast was about to begin on an unprecedented three networks simultaneously — A&E, Lifetime and the History Channel.

Forgetting the Past, Addressing the Present

The first question any writer asks himself when approaching the literary classic is: How do you make a novel written in 1869 relevant to an audience in 2016?

"It's such a great story, and it's a universal story, really," says Davies. "It's about love and how to live your life. It's about families and parents and children and what responsibilities we owe to others and to ourselves. It's such a big universal thing. And it's been awhile since it's been done, so it's always worthwhile doing a fresh version — I would say every 10 years. And since it has been forty years since there's been one in England, it's high time really."

Though Davies sees the story as more timeless than timely, there is one aspect to the story which he feels is topical.

"There was one element which Tolstoy was very keen to emphasize — the Russianness of the story. What does it mean to be Russian? He was writing at a time when he felt Russia — especially at a time when the action in the novel takes place — was greatly influenced by Europe and by the French. It's interesting now that Putin is trying to make, or stress, Russian nationalism in a rather alarming kind of way — resisting foreign influences. And Tolstoy was keen to maintain the language, to talk in Russian instead of French. He was keen on Russian dance, Russian songs, and Russian culture at a time when it was quite unfashionable. And I think we see the same sort of thing happening today."

Before making his new version, Davies did not research all the older versions — especially Sergei Bondarchuk's Russian version. Made in 1967, it cost $100 million (in 1967 dollars), used the Red Army as extras and was released in four parts. Davies admits: "I avoided watching that one because I thought it might depress me too much. I know how many resources they had and how enormous the army was. I thought I'd probably be better off not seeing that." 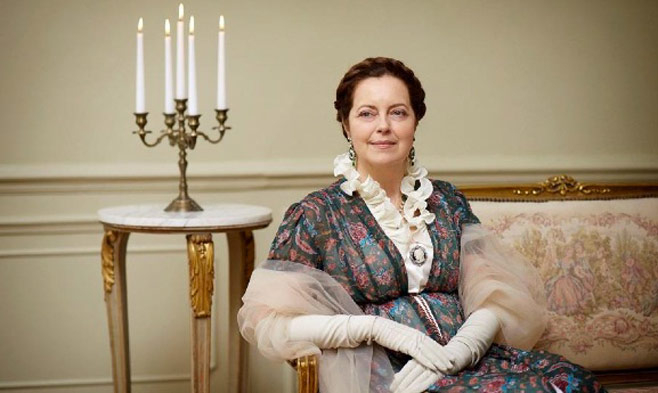 Greta Scacchi who plays the Countess Rostova says she decided to become an actor after watching the BBC's 1972 version of "War and Peace."

The last British-made screen adaptation of Tolstoy was Joe Wright's 2012 film of "Anna Karenina" — from a screenplay by Tom Stoppard — which ingeniously relocated the story to the artifice of a theatre. Did this stylistic route have any appeal to Davies?

"Absolutely not. Actually, that 'Anna Karenina' was very much the director's conceit of doing it in the theater. Tom Stoppard didn't realize his screenplay was going to be used like that at all." Davies thinks the stage-setting was not authentic Tolstoy.

"It was a completely daft, misconceived idea. I mean, Tolstoy was trying to write as simply and as vividly as he could about people behaving in the most natural kind of way. It's the same in 'War and Peace' — I certainly have no temptation to put it on the stage."

Breathing Life Into the Text

For Davies, adapting Tolstoy's prose and pure storytelling is simple: "I try to use the book itself as much as possible. I don't do much additional research. I just try to bring out what's in the book as vividly as possible."

The Wall Street Journal noted of the new television version that, "Fans of Tolstoy's 'War and Peace' probably won't remember a scene in which Helene Kuragina, wife of Count Pierre Bezukhov, has sex with her husband's close friend Fyodor Ivanovich Dolokhov atop the Count's Volga-length dining-room table. And they likely would, if there were such a scene, since it's unlike anything else in the novel's 1,000-plus pages."

Davies himself said at the launch in London last month that, "I haven't felt any need to change 'War and Peace.' Occasionally I have written one or two things that Tolstoy forgot to write." This a reference to the incestuous relationship between the siblings Helene and Anatole which is hinted at in the novel, but has been made more explicit on screen.

"That's an example of it," he explains "I think in almost all adaptations, you're going to get things that are presented in the novel that are just a passing remark or a summary, but not a scene with dialogue. In dramatizing it you try to put as many things as possible in scenes because one thing you can't have is authorial comment, unless you have 'voice of Tolstoy' as a voiceover. So there are a lot of things one writes as scenes. I thought particularly with this little incest theme in 'War and Peace' that a lot of people just don't seem to have noticed it. I thought it probably a good idea to bring it to people's notice."

For Davies, the youthful Natasha Rostova is the most appealing of central trio. "I think because she's so full-hearted and passionate and hungry for life. And she gets into more a difficult situation than most heroines in most classical novels. And so we feel more for her." 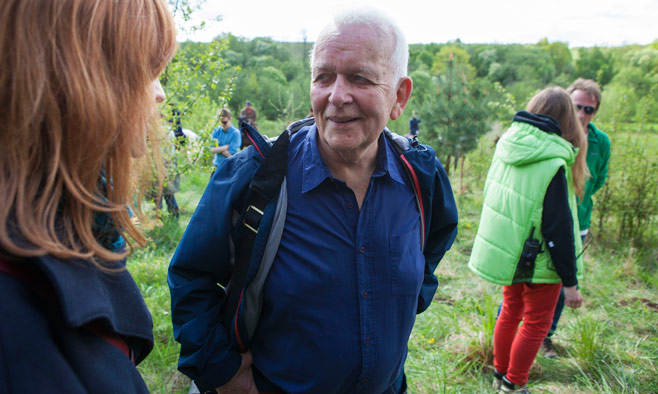 Writer Andrew Davies on location during the filming, which included at the Catherine Palace outside St. Petersburg.

The Trick of Casting

At the core of this version is the casting. The American actor Paul Dano (last seen as Brian Wilson in "Love and Mercy") plays Pierre along with two Britons: James Norton as Prince Andrei and Lily James as Natasha. James came straight onto shooting from her worldwide success as Lady Rose in "Downton Abbey" and then as Cinderella in the 2015 film. James juggled promotional duties for that while filming "War and Peace." She will next be seen as another version of Elizabeth Bennett in "Pride and Prejudice with Zombies," which opens in February.

The casting process was long. According to Davies, "Paul Dano was quite an early decision, a very important one and one that we all agreed on. And Lily too. She did an audition on tape and we were all completely blown away by it. Even though I'd watched her in 'Downton,' I didn't recognise her as the same girl at all. I just thought: 'Wow.' She just stood out as completely special. James [Norton] was relatively late being cast. We looked at so many guys and nobody could agree and then he turned up and we all thought, 'Yes, he's Andrei.' So, it was that sort of process. Some of them we arrived at very quickly, some not so."

Lily James has a quality remarkably similar to Keira Knightley who was just 17 was she played Lara in Davies' 2002 adaptation of "Dr. Zhivago." James is 26. "Lily is that bit older than Keira was when she did 'Zhivago,'" he says. "She's got the ability to take the part of Natasha further. I don't think it's any secret that Keira was great playing the young Lara, but she was a bit too young to play the mature Lara as well as, say, Julie Christie did in the big David Lean movie." 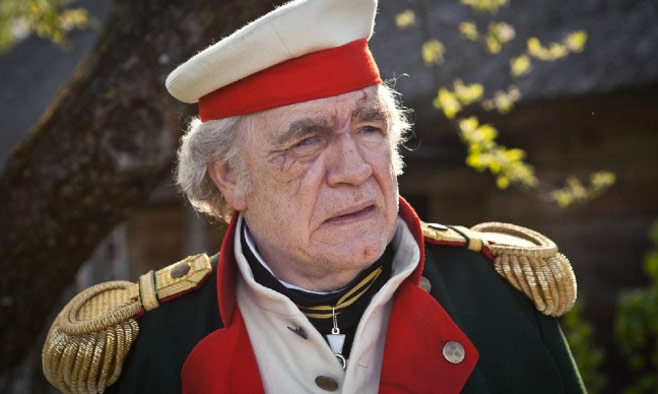 The series has no Russian transmission date yet but Davies admits: "I'm absolutely fascinated to know how it will play in Russia, whether they'll be absolutely disgusted at these cheeky foreigners doing their great work."

Television and the way it is consumed has changed immeasurably since Davies first started writing for the medium in the 1960s. Then it was scheduled line-ups, in black and white and three channels broadcasting a limited number of hours each day. The 21st-century means of consumption is increasingly to use on-demand services like the BBC iPlayer and Netflix. The audience is global rather than local. And this is very much the case with "War and Peace."

"As a consumer, I love to binge watch, and I do watch Netflix quite a lot," remarks Davies. "I think perhaps you're exaggerating the big change because an awful lot of people in Britain still do watch things when they go on air. Six million watched the first episode of 'War and Peace,' and the catch-up and watching it in other ways was relatively small."

His next project is also firmly rooted in 19th-century literature. "It looks as if I'm going to be doing "Les Miserables" for the BBC — not the musical version but a straight drama one. But we're just talking about doing it. I haven't written anything yet."