Italian chef Marco Cervetti left Russia last year after 11 years of work in Moscow restaurants, leaving behind a close-knit team of professionals, many Russian friends and a bar bearing his name.

Cervetti arrived in Russia in 2003. While working for an agricultural company, he was asked by its owners to help with another asset — a Moscow restaurant struggling to make a profit.

He was successful, and soon opened two more restaurants, including the Cervetti restaurant and bar on Nikitsky Bulvar.

So far, so good. But about two years ago, Cervetti saw attitudes shift — Russian partners and investors who had believed they needed a bonafide Italian person to build an Italian business in Russia suddenly changed their minds, he said. Salaries began to be delayed, dividends went unpaid, and attitudes grew disrespectful.

He attributed the shift to a policy of antipathy toward everything foreign pursued by the Russian state — a confrontational stance that can be seen in Russians' attitudes toward foreign goods, foreign knowledge and foreign specialists.

Cervetti was sorry to leave Moscow, but has no intention of ever returning.

"This situation has affected not only me. Eight or nine out of ten Italians who used to work in Moscow have now left the city," he said.

Worth Its Weight in Parmesan 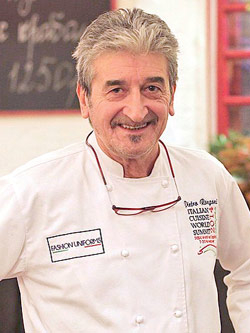 Born in Milan to a family of restaurateurs, Pietro Rongoni has devoted all his life to Italian cuisine. His signature dish is risotto, which he believes is cooked properly only in his hometown. Rongoni has been working in Russia since 1998.

Pietro Rongoni — a chef at Pane & Olio near the Park Kultury metro station — has three Italian friends in Moscow who are leaving Russia to return home. "But I love Russia and Moscow and I will struggle on," he said.

Rongoni has had to adapt to a dearth of Italian products in Moscow after sanctions on Western food imports were introduced in August last year. Italian cheeses and ham became some of the most sought after goods in Russia and a political symbol of the sanctions war with the West over the conflict in Ukraine.

Politics aside, it has provided Moscow's many Italian chefs with a challenge.

When Rongoni first arrived in the capital 17 years ago, there were only two or three Italian restaurants. Their number has since increased to 150, with one-fifth of them managed by Italian chefs.

Rongoni believes that for a restaurant to be considered truly Italian, the chef must be Italian and all dishes prepared with Italian products.

As a result of the food sanctions, Rongoni's restaurant had to exclude most dishes containing cheese or ham from the menu — reducing diners' choices by 30-40 percent. The only cheese now used in the restaurant is mozzarella and burrata produced in the North Caucasus region.

If they impose sanctions on rice and pasta, that would be the end of Italian cuisine in Moscow, Rongoni said.

Some eateries appear impervious to the ban, and have continued to offer their clients prosciutto and a variety of Italian cheeses.

According to Maxim Sankovich, executive director of the Russian Federation of Restaurateurs and Hoteliers, Parma ham can only be produced in Parma, Italy. Therefore, if a restaurant lists Parma ham on the menu, it has been illegally imported or replaced with a locally-produced or non-Italian equivalent.

Some chefs, like Cervetti, switched to Russian products long before the food bans were introduced. It is always better to use fresh, locally-produced products, so, from the beginning, we worked with Russian farmers, he said. 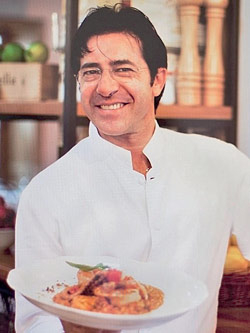 
Chef and owner of Bontempi and Pinzeria by Bontempi

Bontempi has been working in the restaurant business for 25 years. He decided to become a chef when, as a child, he found himself in restaurant kitchen for the first time.

As well as local manufacturers, Italian chefs have turned to other foreign markets. The Italian chef Valentino Bontempi — of the eponymous Bontempi and Pinzeria by Bontempi — looked to Morocco, Tunisia and Turkey after the sanctions.

His sourcing will be limited further following an import ban on a range of Turkish goods including fruits, vegetables, poultry, fish and salt in retaliation for the downing of a Russian warplane near the Turkish-Syrian border last month.

The greatest concern for chefs over the past year has been the significant increase in the cost of both foreign and local produce. While foreign products are increasingly expensive due to a sharp drop in the value of the ruble, local goods have been affected by inflation that sped to double digits when an economic slump began last year.

The cost of supplies has outpaced menu prices and is a serious problem, Bontempi said.

Along with rising food prices, the restaurant business in general has been suffering from the declining purchasing power of customers. According to an October report by consumer research firm Nielsen, 49 percent of city residents had not visited a bar this year, up from 28 percent in 2014, and 46 percent had not visited a pub, up from 32 percent last year.

The number of Russians heading to a cafe at least once a month has also dropped from 63 to 53 percent since the start of 2015. Moscow has traditionally been the Russian city least exposed to economic downturns, but restaurants have felt the pinch.

People continue to eat out, but tend to spend less money, said Rongoni — who recently had to close an outpost of Pane & Olio. They refrain from ordering a salad or dessert, drink less wine or share dishes.

Change for the Tastier

Despite difficulties, some foreign chefs believe the new economic reality will bring positive change to Muscovites' gastronomic life. When diners are careful with money, they pay attention to what they eat, Cervetti said. This should result in many expensive restaurants with poor quality food facing closure — to be replaced with cheaper but tastier venues.

Along with new restaurants, foreign chefs said the food embargo and changing culinary habits of Russians would spur local production. Production of Gorgonzola and prosciutto has already begun in Russia, and Bontempi said domestic manufacturing methods would significantly improve within the next 1.5 years. The only problem is that Mediterranean fish, such as sea bass or dorado, cannot be sourced in Russia.

But where there's a will, there's a way. "We used to import [fish] from Turkey," Bontempi said. "When Russia's sanctions against Turkey come into force, we will increase fish imports from Tunisia."