Egyptian authorities on Sunday projected the flags of France, Russia and Lebanon onto an ancient pyramid on the outskirts of Cairo in the wake of coordinated terrorist attacks in Paris on Friday night.

The images were projected onto the Great Pyramid of Giza, the most ancient of the Seven Wonders of the World at more than 4,500 years old. A candlelight vigil was held at the foot of the pyramid in solidarity with the victims of the recent tragedies in the three countries. 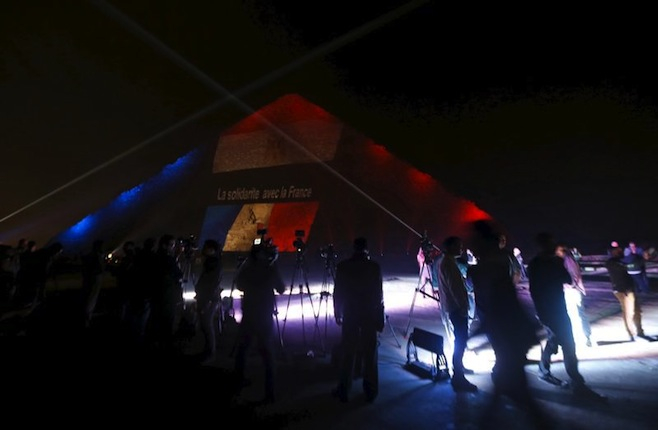 Members of the media record as the French and Egyptian flags and France's national colors of blue, white and red are projected onto one of the Giza pyramids, in tribute to the victims of the Paris attacks.

Paris was targeted on Friday by coordinated suicide bombings and shootings in a wave of violence claimed by the Islamic State terrorist group. At least 130 people were killed in the attacks and hundreds more were injured.

The attacks followed the crash of an Airbus A321 over Egypt's Sinai peninsula late last month, in which all 224 people on board, mostly Russian citizens, were killed.

Western leaders have said the plane crash was likely caused by a bomb aboard the aircraft, but Russian authorities have said it is too early to draw any definitive conclusions.

Egypt Crash Must Be Catalyst for Change

It's odd, how grief can unite people better than joy, at times. Since the horrifying A321 disaster over Egypt's Sinai peninsula, it's been heartening...
news

After the Crash: What Are Russia's Options in Syria?

If the investigation concludes a bomb destroyed the plane, the Kremlin will have to react — but its choices are limited.
news

The Russian military’s movements of nuclear-capable assets appears to send a “signal” to the West amid its losses in Ukraine, analysts...