On Monday, Crocus City Mall hosted a red-carpet, pull-out-the-stops event to mark the opening of the second Nobu restaurant in Moscow. This one is opening six years after the first branch opened on Ulitsa Bolshaya Dmitrovka. Moscow's latest Nobu is the 33rd restaurant in the Nobu empire, first established in New York 22 years ago.

Actor, director, producer and two-time Academy Award winner Robert De Niro was instrumental in first bringing the artistry of Nobu's contemporary Japanese cuisine to the streets of New York City, and now he continues to support its spread around the world. He was welcomed at Crocus City Mall this week during a glamorous red-carpet event at the new restaurant location. The elegant marble halls of the high-end shopping complex were filled with socialites and celebrities, all turned out for the opening of the restaurant and a press conference with De Niro and the other owners of the Nobu chain, renowned chef Nobu Matsuhisa and Hollywood film producer Meir Teper.

As a co-founder of the highly successful chain, De Niro's support of the brand draws actors, musicians and socialites, as well as press attention. De Niro is not merely a face for the brand. He is passionate about the restaurant and has creative input in every new Nobu that opens. 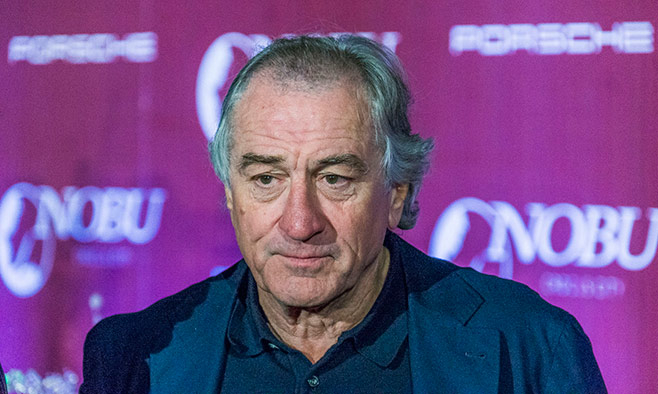 De Niro's support of the brand draws actors, musicians and socialites, as well as press attention.

Along the Red Carpet

In a prelude to Nobu's official opening ceremony, the evening also featured a string of high profile launches. The Santoni boutique was personally opened by the brand's owner, Giuseppe Santoni, who hosted a reception in the store during which he gave pieces from the brand's latest shoe collection to guests. Italo Fontano, founder and designer of U-Boat luxury watches, also flew into Moscow for the occasion to launch the latest model, U-Boat Chimera 46 Skeleton watch.

And the furriers DeNoVo presented their new collection while Lebanese designer Tony Ward opened his first ever mono-brand boutique featuring bridal collections, evening dresses and accessories. Whatever economic woes are affecting the country, they do not appear to have touched the country's most wealthy shoppers.

But it was Nobu's opening ceremony that certainly stole the show. Traditional Japanese drums and degustation of sake specially flown in from Japan for this event created the right atmosphere for enjoying the gastronomic creations of Nobu's highly skilled chefs. Moscow's newest Nobu spans two floors. The first floor offers an open sushi bar, lounge, bar and dining area while the second floor houses a balcony looking over the downstairs lounge, a VIP room and a banquet hall.

Johnny, one of the attendants of the event said: "It's like being in heaven for a night. I have been to Nobu several times and I always order the same thing, but no matter how often I eat it, it keeps amazing me." Nobu owes its success to its creative menu and signature dishes. The gastronomic theme of the restaurant is Japanese cuisine with Peruvian influences. De Niro's personal favorite is the black cod miso, a popular dish in all Nobu branches.

The Crocus City Hall location also has several signature dishes, such as duck breast with orange miso sauce and sea bass with mint salsa. The dessert menu featuring molecular gastronomic experimentations is well worth a taste, too.

A Lifetime of Import Substitution

One of chef Nobu's frustrations when he was working in Peru in his younger years was that it was difficult to get some Japanese products that he was used working with. That meant he had to improvise. Now Nobu says that the limited availability or complete lack of some products forced him to adapt and become the successful chef he is today. Now the food counter-sanctions instituted by Russia are forcing the Nobu restaurants based in Russia to do the same kind of improvisation.

Along with their signature dish of black cod, Kobe beef is also one of the prime dishes on their menu. This tender, tasty and extremely expensive beef was originally from Kobe, Japan, but now it is more frequently from Australia, which is where the Nobu restaurants get it. The Nobu restaurants are using "import substitution beef" raised locally. Judging by the reaction of guests to the samples at their opening, Russian beef is going down beautifully.