The main program of the 6th Moscow Biennale of Contemporary Art is over. Held in the beautiful Central Pavilion of VDNKh, it was only 10 days long, and unless you were actually there for the performances it was rather underwhelming. But the special projects are still up and running, although a few exhibitions are slated to close soon. Here are three exhibits you must see while you can.

Pavel Pepperstein's exhibition "The Future Enamored With the Past" at the Multimedia Art Museum, Moscow (MAMM) once again proves that he's not only one of the best contemporary artists known outside of Russia, but also one of the most productive and unique. Utopian visions of the Russian avant-garde movement of the early 20th century meet in Pepperstein's new works with an acute understanding of the present moment.

The avant-garde references are many, starting with the concept of "the supreme" — basic geometrical forms — as the foundation of suprematism, to various figures borrowed from Malevich's works.

As you walk around the exhibition and read the names of Pepperstein's works or the texts in them, you might feel as if you entered a sci-fi bookstore or were transported to the distant future: "The mountains are eating the supremes in the south of China in the year 3711." "Suprematist highway on Sri Lanka, 2115." "The Arch of Buddha in Jerusalem in 2904." His mistakes in English spelling and grammar, which are probably intentional, make the works seem even more surreal.

If you've been to any social events in Moscow you probably know who Andrei Bartenev is: the guy in a funny hat. But that guy in the odd headgear is one of the most prominent figures on Russia's contemporary art scene. Bartenev is a unique artist who blends the fine arts, performance, theater, dance and music in his works.

Bartenev's retrospective is entitled "Say: I Love You" after his "audio" sculpture: a microphone in the center of the piece where visitors say "I love you" and the sound is carried along a line of 200 speakers arranged in a spiral.

The retrospective features Bartenev's most significant works created over the past 25 years, such as "Botanical Ballet," a series of grotesque black and white costumes, or the "Snow Queen" project, which consists of transformer-like figures made out of traditional Soviet products, toys, and other objects. Both series were made in the 1990s, and some of their exhibits were previously exhibited at the Victoria and Albert Museum in London and at Art Basel in Switzerland. A brand new sculpture called "Buckthorn Berries" was made especially for the retrospective. 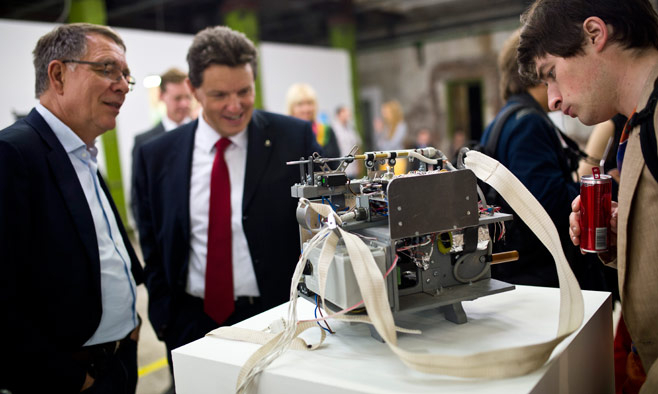 One of the kinetic sculptures at the Nadezhda — The Hope Principle show.

Flat screens located all around the exhibition display Bartenev's famous performances, including one of his most recent ones, "Kiss of the Tree" at Archstoyanie 2012 (an architectural objects festival in the Kaluga region).

One part of the exhibition, called "Fabrika" (Factory) after Andy Warhol's New York studio, showcases the best works by Bartenev's students and serves as a testimony to his immense influence on the younger generation.

Nadezhda — The Hope Principle exhibition in the old production hall of the Trekhgornaya Manufaktura is a very special biennale project — the only one that will be shown abroad. Nadezhda was organized in cooperation with the Austrian Cultural Forum, which will present a slightly adapted version of the exhibition at the Kunsthalle Wien.

Nadezhda explores the history and present day of several industrial cities in Russia, including Yekaterinburg, Magnitogorsk, and Norilsk. Photographers and artists traveled to these cites to capture the architectural details and daily lives of the residents. Founded during the industrialization era of the 1920s and 1930s, these cities were at the forefront of the effort to make the Soviet Union an economic powerhouse. Largely left to decline after the collapse of the Soviet Union, now these cities are struggling to make ends meet.

Well-known Russian artists such as Yelena Chernyshova and Igor Moukhin are joined by some Russian newcomers as well as artists from around the world, including from Austria, Denmark and the Netherlands. The exhibition is divided into blocks devoted to different cities, and the artwork ranges from photographs to kinetic sculpture.

The unique architecture of the exhibition is meant to transport the visitor into a Soviet factory: a traditional Soviet monument stands in front of the building by the turnstiles at the entrance. It was designed by Dasha Paramonova, an up-and-coming young architect, who often works with one of Russia's best known architects/artists, Alexander Brodsky.

The exhibition is named after an industrial district in Norilsk. A photograph of the cheerful sign "Nadezhda" (Hope) standing in the middle of a desolate landscape of factories and snow became the exhibition's poster — and a metaphor for life in these cities.