With all the big exhibitions that opened this autumn as part of the 6th Moscow Biennale or as museum season openers, one small but interesting show might have been overlooked. It is an exhibition of photographs at the Sakharov Center called "Direct View."

The 11 series of photographs on display were all winners in an international competition designed to support and highlight the work of independent journalists and photojournalists. All of the series examine the relationship between the individual and society or between the individual and the state. And, perhaps most important for this center of human rights, they portray their subjects with dignity and respect for their human and civil rights.

The photographers were asked to show some of the most urgent problems in society and possible ways of reconciliation and resolution. There were three broad subject categories: "Problem'" where issues, friction and disagreements between society and people are central. The second category, "Conflict," was for photographs that showed efforts to solve these issues between people and society, civic institutions and state. And the third category, "Compromise," focused on conflict resolution through dialogue, social change and reform.

The current situation in Ukraine and gay rights in Russia, both topics that have dominated the international media over the past year, were prominent subjects for the photographers. But Occupy Wall Street was also portrayed in a series, as were more intimate issues, like a family in Russia who adopted a special needs child.

Andrei Polikanov, director of photography for Russian Reporter magazine and a member of the competition jury, told The Moscow Times that he'd been involved in such projects for over 20 years. He said, "All the themes and topics represented here are very important to me. For two decades I've been looking at the problems in Ukraine, gay rights and disabled people. I wish we could have showed more photographs here — the ones that made it on to the shortlist — because they would give more perspective about the idea behind the competition and its meaning."

One of the series, called "The Hunt," which won third prize in the "Conflict" category, was shot by Ramil Sitdikov over two months during the summer of 2014. It covered the dramatic story of a citizen's group that banded together to protect themselves and find the murderer — or band of murderers — who had killed at least 14 drivers on the well-traveled M4 highway outside Moscow.

Sitdikov began his career in IT and economics but quickly switched to photography. Since 2012 he has been a staff photographer at the RIA Novosti news agency. The Moscow Times was able to speak to Sitdikov during the exhibition. 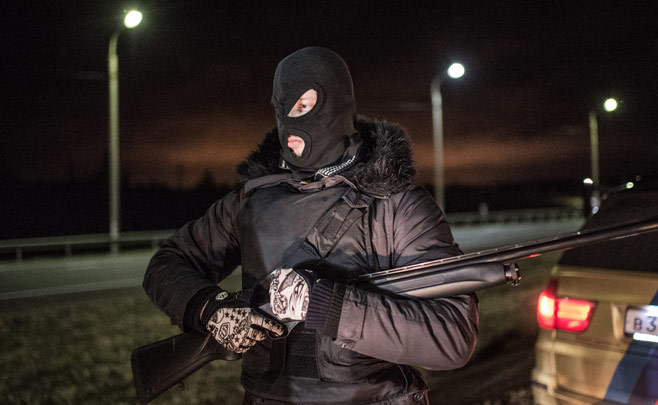 A masked man patrolling the streets in one of Ramil Sitdikov's photos.

Q: Are you glad to be part of this exhibition?

A: I know almost all photographers at this exhibition and their works, and for me it is an honor to be among them. The exhibition is really interesting. The photographs are quite diverse and cover important problems in our society.

Q: What was the most challenging part of your two-month journey?

A: I work in a news agency, and every day I shoot different subjects — sports, politics, press conferences and so on. Unlike freelance photographers, agency photographers usually don't have time to work on one story for a long period. So it was really a challenge to simply find the time to do the story. The guys would go hunting only at night, so I would go out with them all night and then have to go to my day job in the morning. That was tough.

Q: Did the competition help you develop your photography?

A: This story was so important to me because it was the first story I did myself from beginning to end. I doubted that I could do more than I do every day, but now I know that I can. So I think I'm developing, even if it's not as fast as I'd like.

Q: The majority of photographers focused on subjects such as Ukraine and gay rights that have been in the news over the past years. Did you consider these subjects as well? If so, why did you choose differently?

A: Those are interesting subjects and I did consider them. But in the end, I decided not to do a series on those topics, mainly due to my inexperience. When you pick such a big and difficult subject as gay rights you have to know exactly what you want to tell with your story. First you have the idea, the message, and only then come the photographs. I don't know what message I want to convey yet. There are a great many interesting subjects, like refugees in Europe, but you can't cover everything you want. You have to choose.