The Tretyakov Gallery has put on display over 250 works of a beloved Russian artist, Valentin Serov (1865-1911), in a retrospective exhibition dedicated to the 150th anniversary of his birth.

The exhibit was one of the most anticipated art projects in Moscow this year, with the excitement boosted by the first video advertisement the museum has done. In the clip, one of Serov's most famous portraits — the 1887 painting of Vera Mamontova called "A Girl with Peaches" — comes to life and talks about posing for the artist. That portrait is included in the exhibition, along with works from 25 Russian museums, nine private collections and five foreign museums, including the Musee d'Orsay in Paris.

In his works, Serov combined Russian realism with both Western European painting traditions and innovations that were sweeping the continent at the turn of the century. He was one of the pioneers of Russian Art Nouveau at the turn of the 20th century. The exhibit is the first major exploration of all themes of Serov's works, not only his portraits —  including those of the Russian royal Romanov family — but also his lesser-known landscapes, book illustrations and works for theatrical productions.

The display is divided into two parts on three floors. The exhibition begins with the world of Serov's paintings and then continues to his drawings, which are less familiar to the general public.

"Serov started with drawing," Maria Krivenko, the co-curator of the exhibition and conservator of the drawings and prints department of the Tretyakov Gallery, told The Moscow Times. "But drawing and painting went hand in hand for him. The two art forms were equivalent. Artists worked with mixed media, especially in the beginning of the century."

The exhibition opens with Serov's most celebrated painting, "A Girl with Peaches," which is considered to have inaugurated Impressionism in Russia.

"[Igor] Grabar [Serov's contemporary, painter and art historian] called this work 'the Pushkin of Russian painting'," said Olga Atroschenko, the curator of the exhibition. "It was created by the painter when he was just 22 years old, when he was unknown. It immediately brought him fame. It seems that this painting embodied something that Russian art had long dreamed of — making Russian art as light and clear as the paintings of French Impressionists while at the same time retaining its meaningfulness."

The main floor of the exhibition showcases Serov's psychological portraits, including a highly expressive painting of art patron Mikhail Morozov in front of a still life by Henri Matisse. Portraits of the royal Romanov family, which brought him many awards at international exhibitions, show Serov as a court painter. The portrait of Alexander III lent from a museum in Copenhagen is being exhibited in Russia for the first time. Serov's admiration for the mythology of the ancient world is shown in several works, including "Europa and the Bull" (1910) from the Tretyakov collection. 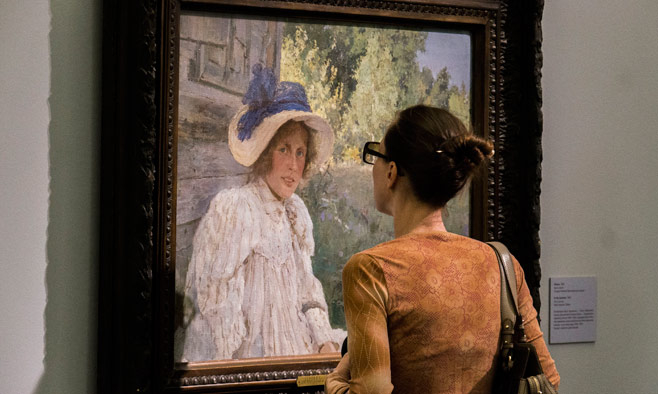 Some works in the exhibition are being shown in Russia for the first time.

Drawings are presented in the second and third halls of the exhibit in smaller rooms with dimmed lighting. The range of the drawings on display — from enormous full-length portraits, like the drawing of Russian opera singer Fyodor Chaliapin, to hand-sized book illustrations for Ivan Krylov's fables and drawings for the theatrical productions of ballet impresario Sergei Diaghilev — is breathtaking.

The interaction of Serov's paintings and drawings is what Irina Shumanova, head of the Tretyakov Gallery department of drawings and prints of 18th-20th centuries, called the main "provocation" of the exhibition, forcing visitors to reconsider what they know of the artist.

The retrospective of the painter who worked for a little over 20 years is crowned with the celebrated portrait of Ida Rubinstein, a Russian ballet dancer, actress of the Belle Epoque, brought from St. Petersburg's Russian Museum. The painting was at the center of a scandal at the beginning of the 20th century, with critics reprimanding Serov for painting the ballerina nude and being too obsessed with modernism.

"There's a good reason for ending the exhibition with the portrait of Ida Rubinstein," said Shumanova. "Created in painting technique, it is a combination of the two origins of Serov's work. It brings together all the dramaturgical developments of the exhibition — formal portraits, theatrical portraits, painting from life and of antiquity. It's Serov's theater, the keystone of the exhibition."

Speaking at the opening of the exhibition on Tuesday, Tretyakov director Zelfira Tregulova emphasized Serov's great contribution to the development of art of the 20th century, adding that his works continue to be modern today.

"We wanted to introduce the painter to the modern audience, who is already somewhat skeptical about classical figurative art, so that the viewers realize how much was done by Serov — how his art and what he did paved the way for the art of the 20th century," she said.