Anyone with a phobia of spiders might want to steer clear of the Garage Museum of Contemporary Art for the next several months, where a new exhibition of the extensive body of work by the French-American sculptor Louise Bourgeois has just opened. Visitors to "Louise Bourgeois. Structure of Existence: The Cells" are greeted by her famous sculpture "Maman," a 9-meter-high bronze spider that seems to stand on guard by the entrance to the exhibition. However, if there was ever a time to conquer one's arachnophobia this is it, as "The Cells" is well worth anyone's attention. This is the largest exhibition of Bourgeois' "Cells" in the world and the first major exhibition of the work of this celebrated artist in Russia.

Although it is hard to imagine that anything within the museum could be more enthralling than the colossal spider outside, the surprises do not end at the door. Bourgeois' work has been described as shocking, disturbing or bewildering. "Structures of Existence: The Cells" focuses on an extraordinary series of small sculptural environments that Bourgeois created in the last two decades of her life, starting at age 83 and up to her death at the age of 98.

Each cell is a miniature segregated space that encapsulates different aspects of Bourgeois' relationship to her past and present life. There are about 60 works in the "Cell Series," of which 26 are included in the exhibition. Also featured in the collection are her earlier sculptures, drawings and paintings, all of which map her path to the creation of this monumental body of work. 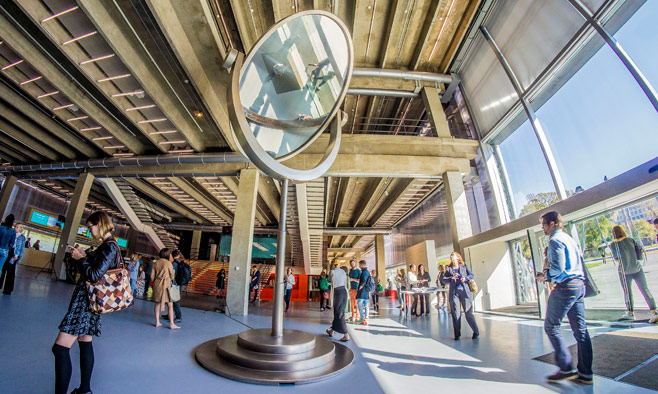 Bourgeois used many mirrors as symbols of self-knowledge and truth.

The exhibit covers most of Garage's exhibition space. Visitors begin on the ground floor where just three of the 26 cells are displayed. Here the main attraction is Bourgeois' last large-scale sculpture, "Has the Day Invaded the Night or Has the Night Invaded the Day?," which is presented here for the first time since its creation in 2007. This 6-meter high pivoting mirror greets visitors upon arrival, immediately engaging them with Bourgeois' work and absorbing them into the world of her creations.

The exhibition continues on the third floor and brings in a more eclectic mix of painting, sketches and small scale sculptures. Bourgeois' work can be at the same time harrowing and peaceful, sinister and tender, loving and hateful and vulnerable yet strong. Visitors to the exhibit spoke more of the emotional content and effect of her works than of the formal aspects of her art. One person said that "she must have carried her painful childhood memories with her throughout her life," while another remarked on the "unusual relationship she has with the image of the spider."

Indeed, Bourgeois considered the spider a protective creature with strong maternal qualities. It is a recurring image throughout the exhibit that symbolizes both the tender care and fierce intellect of her mother, with whom she had a close relationship. Bourgeois' repetition of spider imagery resulted in her becoming known "The Spider-Woman" in later life.

"Structures of Existence: The Cells" is more than just an exhibition of work. It is a complete immersive experience into the life and work of Bourgeois. To complement the collection and help museumgoers grapple with this sometimes difficult artist, Garage has developed an educational program called "Through the Looking Glass of Louise Bourgeois." The program offers a variety of activities and events to provide a context for the artist's work, including regular screenings of the documentary films "The Spider, The Mistress and The Tangerine" and "Louise Bourgeois: No Trespassing" in the Garage Auditorium. There will also be a series of lectures and discussions on Friday evenings in which Russian and foreign art historians and critics consider various aspects of her work. For children there are weekend workshops focusing on sculpture as a way to express imagination, and for adults there is an audio guide available in both Russian and English, special guided tours, as well as a "resource room" on the second floor where a detailed timeline of Bourgeois' life gives a better understanding of her work. 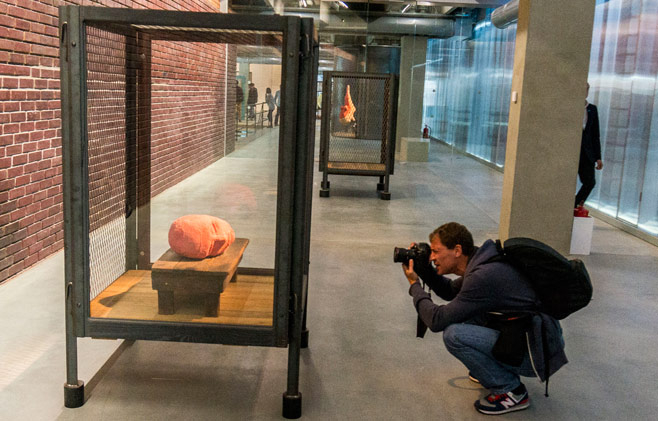 Bourgeois' individual cells evoke emotions and memories from her past.

Bourgeois was born in France in 1911 and began creating her first sculptures in the 1940s. In 1982, at the age of 70, Bourgeois had her first retrospective in the Museum of Modern Art in New York. Astonishingly it was not until 1994, at the age of 83, that Bourgeois began work on "The Cell Series" and her gigantic spiders. Bourgeois' prolific career spans seven decades, from the early decades of "modern art" through to the period of "contemporary art."

Although this is the first exhibit of Bourgeois' work in Moscow, it is by no means her first exposure to the Russian art scene. As a young woman Bourgeois visited Russia twice, first in 1932 and then in 1934 when she began studying art intensively. In 2001, Bourgeois became the first living American artist exhibited in the State Hermitage Museum in St. Petersburg.

"Louise Bourgeois. Structures of Existence: The Cells" will run until Feb. 7 at the Garage Museum of Contemporary Art. Gorky Park, 9/32 Ulitsa Krymsky Val. Open every day 11 a.m. to 10 p.m. 495-645-0520. garagemca.org. A lecture that is part of the education program, "Louise Bourgeois vs. Vladimir Tatlin," by Olesya Turkina, will be held Fri. at 7:30 p.m. Free admission.