Today Michael Palin may be known first of all as one of the comic group Monty Python, but he may go down in history for his writing. He is now touring Britain with his one-man show called "The 30 Years Tour." The 30 years in question are his three volumes of published diaries covering 1969 to 1998, which include his extensive travel writings. The Moscow Times caught up with him to talk about his trips to the Soviet Union and then the post-Soviet states.

Palin first visited Russia in November 1986 with Terry Gilliam for a screening of his 1977 film "Jabberwocky" at the Moscow International Film Festival. Later, between 1989 and 2012 he emerged as the star of a series of nine travel documentaries made for the BBC with accompanying books.

When filming "Pole to Pole," his travels took him to the Soviet Union at the end of its history. This was August 1991, during the attempted hard-line coup.

"It's a very dramatic place to be," Michael says of filming in Russia. "It isn't one of these countries where things happen rather gently. In Russia people come to you and you're suddenly confronted with a wonderful man who was making a film about crayfish in Novgorod. He had a party with all of his friends, there were toasts given and all that and I had to drink about 18 vodkas on the run. There's no half measures when you go there — it's directly into people's feelings and passions and emotions."

That particular journey took him from Tallinn to Leningrad (as it was then) and passed through regions devastated by the Chernobyl accident five years earlier.

"Passing through Chernobyl, we were able to go into some of the surrounding area where they were trying to clear everybody," he remembers, "but there was still one or two people left, so you find yourself in this contained, contaminated area and there would be all the sort of undergrowth that had shot up — it was verdant, brambles everywhere. And in this middle of this were two or three little wooden houses and an old couple who just refused to leave. They weren't hauled out, they were just allowed to stay there. This wasn't at the heart of the contaminated zone, but it was definitely within it. I thought that was absolutely extraordinary. We talked to them. That was one of the remarkable things about traveling through the U.S.S.R., Russia — there was always a story somewhere, a big story."

That trip was also historic. "We were probably the last Western documentary crew to film in the Soviet Union."

In 1996 shooting "Full Circle" for the BBC, Palin arrived in Vladivostok in the Russian Far East.

"It was a very exciting, dramatic, unpredictable period of filming," he recalls. "We flew into Kamchatka. I thought that was the most marvelous place to have visited because very few know about it — 25 live volcanos, rivers teaming with salmon."

In Vladivostok, the Russian Pacific fleet choir allowed him to attend one of their rehearsals and film there. "I was extremely impressed by the generosity with which they allowed us to do that," he says. "But they also took very seriously the fact I was going to come along and sing. There was no laughing, no sniggering — they were doing their bit absolutely straight: very strong sailors giving this song all they've got." 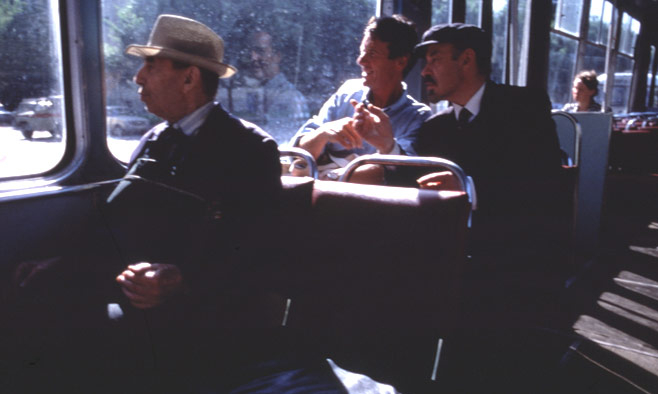 Michael Palin and a Vladimir Lenin double on a bus in Leningrad in 1991.

Around the same time, he was flown out to an island, and "the helicopter flew out over a sort of inlet, where there must have been about a dozen boats, all on the beam ends, rusting slightly. I asked them what that was and they said that was part of the Russian Pacific fleet and that they couldn't afford to keep it going. The fact that it wasn't hidden from us or anything like that was also rather remarkable."

"There was a great sort of openness and the fact that normal rules didn't apply, which is something we found throughout Russia. It's down to the people you meet and all that, they break the rules all the time and makes it quite exciting for us as a film crew."

For his series "New Europe," shot in 2006, Palin journeyed through the former Soviet republics: Estonia, Latvia, Lithuania, Ukraine and Kaliningrad/Russia. They were full of relics and reminders of the Soviet period. In the Baltic resort of Palanga, he got to sleep in the bed Brezhnev used to sleep in when he holidayed there between 1977 and 1982.

"Brezhnev's bedroom," says Michael, "was in one of the great houses where Brezhnev had stayed. And it was quite extraordinary because all of the furniture was quite enormous. And the size of the room absolutely colossal. And yet the bathroom was tiny. But the water coming out of the tap came out at a tiny little thin trickle. So I had this feeling of people maybe having to run the water for Brezhnev. I can't imagine the great leader of Russia waiting all that time for the water to come out."

But there were many striking contrasts between the Soviet Union he had visited in 1991 and the New Europe of 15 years later. "What had changed was the young people particularly were engaged and Westernized very, very quickly," he explains, "while the older people who had been part of the Soviet Union in Eastern Europe were very uncertain about this new future. They didn't take advantage of the freedom to travel, which, of course, was a huge change — that young Russians or any Russians could just go and travel to Europe. One forgets how trapped they were before that."

With the older generation he found "a great deal of nostalgia for the days of Soviet control, where you knew exactly where you were going to be, where you were going to live, your house was looked after, people made sure your food was subsidized. The free market world for them was a frightening prospect, and I could see a lot of people who were very equivocal about the change. They were by no means jumping up and down and saying 'this is so much better'."

Today Palin finds British-Russian relations at a confusing juncture: "It seems at one stage we were much closer," he says. "We identified with each other much more, we traveled together much more. And yet then you have Putin with a very old-fashioned sort of 'the motherland' Russia looking after its own people — itself, really. And there is a fear of the rest of the world, paranoia about the rest of the world muscling in on Russia's territory, the need to demonstrate that you're a strong, powerful country. And all that seems to go back to the Soviet days. I'm not exactly sure where we are with them."