For the seventh year in a row, the Russian National Orchestra (RNO) is due to inaugurate the Moscow classical music concert season with its Grand Festival. Running from Monday until Sept. 26 at Tchaikovsky Concert Hall, this year's six concerts once again offer the festival's usual mixture of music and musicians both familiar and unfamiliar to Moscow audiences.

Created in 1980 and still led by its founder, the conductor and pianist Mikhail Pletnev, the RNO has long occupied what many experts consider the very top position among Moscow's all-too-numerous symphonic ensembles.

The festival opens Monday under Pletnev's baton with concert performances of two stage works based on Russian folklore, Nikolai Rimsky-Korsakov's one-act opera "Kashchei the Immortal" and Igor Stravinsky's ballet "The Firebird." Kashchei, an evil sorcerer given to molesting young women, is a central character in both works and, strangely enough, despite being dubbed "the Immortal," manages to be killed off in each of them.

From my own experience, neither the opera nor the ballet has a score sufficiently strong to stand by itself as purely concert music. But perhaps Pletnev will find a way to make one or both of them a worthwhile experience even in absence of stage action, costumes and scenery.

Likely to be of greater interest musically is the second concert, on Sept. 12, also led by Pletnev and featuring Sergei Prokofiev's seldom-played Symphony No. 6. Written between 1944 and 1947 and inspired by the personal tragedies suffered as a result of World War II, it is a work of great beauty and profundity, widely regarded as the finest of Prokofiev's seven symphonies and deserving to stand beside the much better known "wartime" symphonies of Dmitry Shostakovich.

The festival concert on Sept. 14 brings a rare Moscow appearance by violinist Viktoria Mullova, who, shortly after taking a gold medal at the 1982 International Tchaikovsky Competition, defected from the Soviet Union. Besides her success in performing the standard violin repertoire, Mullova has also enjoyed much acclaim for her playing of 18th-century music in the style of the time and her forays into jazz and pop.

For her festival concert, Mullova again steps across conventional musical borders with a program, highly praised elsewhere, of classic Brazilian songs, titled "Stradivarius in Rio," which she performs together with an ensemble made up of her cellist husband Matthew Barley, plus a guitarist and percussionist. 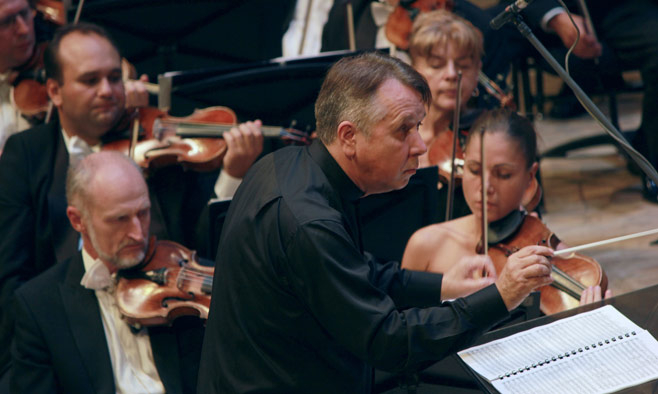 Mikhail Pletnev leads the RNO in the Grand Festival for the seventh year.

One of the outstanding events of last year's RNO festival was the performance in concert of Gioacchino Rossini's seldom-heard early opera "Tancredi," as led by Italian conductor Alberto Zedda, perhaps the world's most authoritative interpreter of Rossini's music. The 87-year-old maestro returns to the festival on Sept. 18 to lead another work by Rossini, this time "Semiramide," the last of the composer's many operas written to an Italian libretto and certainly the most complex and vocally demanding of them all.

The festival closes with a pair of concerts devoted to the music of two Russian composers born just 15 months apart — Alexander Scriabin in January 1872 and Sergei Rachmaninov in April 1873 — but radically different in their approaches to the art of composition.

Leading the RNO on both occasions will be American conductor Hobart Earle, who since the early 1990s has served as chief conductor of Ukraine's Odessa Philharmonic Orchestra. Appearing as piano soloist at both concerts will be Pletnev.

Contemporary French composer Pierre Boulez was once asked what he thought of Rachmaninov, to which he replied: "With Rachmaninov, there's no need to think."

That assessment might perhaps justly apply to the composer's immensely popular and overwhelmingly lyrical Piano Concerto No. 2, written when he was in his late 20s, which Pletnev performs at the festival's final concert on Sept. 26. But it certainly seems unfair with respect to the composer's "Symphonic Dances," which completes that evening's program. Rachmaninov's very last composition, written in America some four decades after the concerto, "Symphonic Dances" is almost universally regarded as a masterpiece of 20th-century Russian music, one in which the composer pays a nostalgic farewell to his distant homeland in musical style and language as sophisticated as any then to be heard from the likes of Prokofiev, Shostakovich and Stravinsky.

Boulez would almost certainly never have made a similar remark about Scriabin. One of the great musical innovators of the early 20th century, he has been much admired by other composers both of his own time and later generations. The festival's all-Scriabin concert on Sept. 22 presents two of his relatively early and conservative works, his Piano Concerto and Symphony No. 2.

Further information about the RNO Grand Festival can be found at meloman.ru.