Bollywood films became available across the Soviet Union in the 1950s as an alternative to western cinema. Deep Bhasthi looks back at the Hindi movies that enthralled eastern Europe, and asks why they were so popular.

By Deepa Bhasthi for The Calvert Journal.

Marina U., born in January of 1977, was 16 years old in 1993, when she wrote to me from a little town deep in Russia. She wrote the names of her pets and listed her favorite actors in the letter, blue ink on checkered paper, that came to my little town deep down in South India. Asking for photos seemed to have been the rage then, for she had asked me to send mine, promising to send hers the next time. We never did exchange photographs. I was 10. Circling the names I couldn't quite pronounce, found in the pages of "Misha," the children's magazine from the Soviet Union that Dad had procured back issues of for me from the old paper mart, I had started corresponding with two girls in Russia. I have all four of the letters that they sent me, including one from a younger sister who got passed my letters when the older went away to study. I cannot remember if more letters were exchanged. Neither do I recollect now why we didn't continue being in touch.

Every one of these letters talk of how much these girls loved Bollywood movies. Their most favorite actors were listed out. It read: Shah Rukh Khan, Mithun Chakraborty, Aamir Khan, Juhi Chawla, Rati Agnihotri, Govinda, Rekha, Sridevi, etc., a veritable who's who of popular cinema of those days. I hadn't thought much about their strange interest in Bollywood until a few weeks ago when one of those random thoughts that spring up out of the blue, catching you unawares, struck me. A cursory scratching the surface of Google-dom threw up virtual realms on the cultural diplomacy of the early 1950s that India, freshly recovering from gaining independence, practiced with the then U.S.S.R. 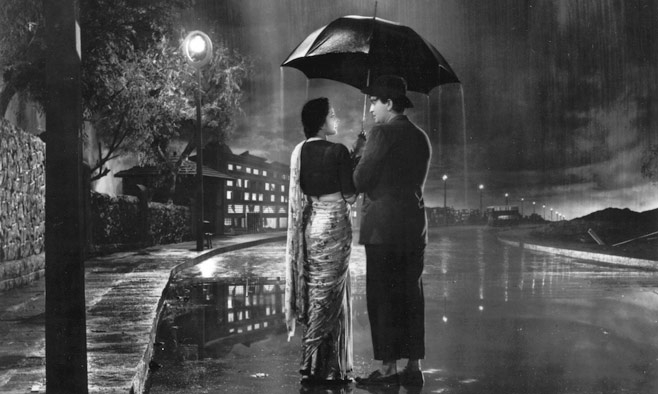 I was a Johnny-come-lately to this matter, it turns out. The late 1980s and early 1990s were years when the Soviet states were on their last legs of unity and India was similarly poised for new beginnings, opening its markets to the years of Coke and capitalism that would follow. By then, the grip that Bollywood held over the cultural landscape of the Soviet states had already loosened significantly. The era of sustained cultural diplomacy, via films from India to the U.S.S.R. and via books in English and most Indian languages in the other direction was on a steady wane. The peak was in the 1950s and 60s when Raj Kapoor especially, and Dev Anand and Dilip Kumar to a certain extent, elicited fan frenzy that can only be compared to the madness that followed the Liverpool boys, the Beatles, on the other side of the world.

Bollywood is a sweeping all-encompassing term that denotes the Hindi film industry. To be more specific, it refers to the films that are made, to a large extent, in Mumbai, the business heartland of India, and are instantly recognized worldwide by virtue of their basic characteristics: song and dance routines, varying degrees of melodrama and much else. The term Bollywood, a nomenclature loathed by some of its most widely recognized ambassadors for seeming to be a perceived mimicry of its western counterpart Hollywood, is convenient to segregate these formula films from the rest of the films made in Hindi. In the same league as cricket, Bollywood brings my country together, be it when marveling at the insane money made by some of these films, or with the songs, both the ones with poetry and the crass ones that are hummed across the country. It is as good as religion, given its influence. Everyday life is rife with references from a colourful factory that both manufactures, and nourishes, the escapist aspirations of a country.

The song "Holi Aayi Re Kanhai" from the film "Mother India" sung by Shamshad Begum featuring Rajkumar and Nargis.

This virtue of granting escapism to its consumers was what made Bollywood films so popular in the Soviet Union of the 1950s. Mine was the generation of Shah Rukh Khan and Aamir Khan movies. But growing up, having  parents who were great fans of old Hindi songs — film songs, India's alternative for pop songs — had made me familiar with the poetry in their lyrics, even though I didn't care much for the films themselves. They were too slow, silly and old fashioned for my teen tastes. Raj Kapoor and Nargis, among others, were thus very familiar. This couple had taken the Soviet Union by storm, starting with Awaara in 1954. Alexander Lipkov's thorough paper, "India's Bollywood in Russia," lists Nimai Ghosh's "Chhinnamul" as the first film that was released in the U.S.S.R. But it was the Chaplinesque roles of Raj Kapoor that struck a chord.

Eight hundred prints each of Dev Anand's "Rahi" and "Awaara" were released in all the languages of the 15 Soviet republics, I read somewhere. Kapoor, a slightly goofy smile in place, with a comical walk and trousers that didn't go past the ankles, was a symbol of optimism. His roles saw him as an innocent do-gooder, impractically romantic but beloved nevertheless. Story lines that predictably swirled around the themes of sympathy for the oppressed, socialist egalitarianism and the triumph of good over evil resonated with Russians whose only other option at the cinema was propaganda movies. When Kapoor, and his later counterparts, romanced their heroines, they did so surrounded by Swiss Alps and pretty flowers, in a manner that was depicted as wholly sustainable, even essential, in the pursuit of true love. It allowed a sweet path to escapism for a population otherwise fed on the state's idea of love for the motherland, ideas that were relentlessly driven down by propaganda movies that showed only what the people saw on the streets, at work and lived in their homes anyway.

Just after India's independence in 1947 when, after much deliberation, the then Prime Minister Jawaharlal Nehru decided to side with the U.S.S.R., Bollywood movies began to be either dubbed for a Soviet audience or subtitled. As pure escapism, a duty commercial movies continue to steadfastly fulfill, these movies ran to full houses for weeks at best, or to fairly full houses, at their worst. Indian films, always Hindi, not those in other languages, were encouraged because they were seen as protection for the Russian film market against Hollywood films. Though Hindi was never officially a "national language" in India, the film industry in that language was the biggest in those years. Not surprisingly, art films, those of Satyajit Ray and others of his ilk, failed miserably at the box offices. These tackled poverty and issues that affected real lives. Lipkov talks of how there were many instances of audiences walking out of movie halls when these "real" movies were being screened.

It perhaps helped that in the 1950s both India and Russia were in similar situations — the former, newly free, the latter, reeling under losses from WWII. It helped to be able to sit in a dark hall for up to four hours and laugh and cry and escape from the drudgery of life outside. With the collapse of the U.S.S.R., the mighty distribution machinery of American films began to churn louder and louder. The quality of Bollywood was on the decline as well. The extensive cultural influences naturally began to ebb as both economies opened their doors to global vagaries and cultural diplomacy was no longer given its due currency.

Indian film star Raj Kapoor at the Film Festival in Moscow in 1967.

India TV, the only Russian channel that broadcasts Indian movies and programs, is said to be rather popular. Their website says that they regularly show films, both classic Kapoor and newer titles. I imagine it caters to a section that is nostalgic for the good ol' days. Nostalgia is but another means of escapism from the present, from what lies above the TV screens. Nostalgia is big business too.

Гойда! They Shouted. Say What?

Гойда: let’s go (maim and kill) Last Friday there was a big event on Red Square in Moscow to celebrate (sic) the new Russian regions (sic),...
time out

Ten top dancers at the Bolshoi Theater have been suspended for a month after performing at a gala in Uzbekistan, Russian media reported this week. The...
Autumn in Venice