It would be hard to find a better advocate for adoption in Russia than Ulia Khashem. With her pink curls, big eyes and handmade jewelry, it's easy to see why people on social media call her a fairy godmother. Her job is to organize a summer camp for seriously ill children and their parents for the Vera Hospice charity foundation, but her desire to help children who need love and care doesn't stop at the office. Just over a year ago, Ulia and her husband Alexander brought home four-month-old Maya from an orphanage outside Moscow.

"I have been wanting to adopt ever since I was a child. I was always very scared of orphanages, hospitals and prisons: these were the three places I imagined as hell. As a little girl I always thought: why give birth, if there are already so many children who need parents and a home?" Khashem said.

The number of orphans in Russia is falling. According to statistics from usynovite.ru, a project of the Department of Education and Socialization of Children of the Russian Ministry of Education, the number of orphans in Russia in 2014 was half what it was in 2007. The site also reported that more than a third of all children in orphanages found families last year. In the same year, however, more than 5,000 adopted children were returned to orphanages, and about as many infants were abandoned at birth.

Still, adoption in Russia remains relatively rare. Prospective parents fear a range of issues, ranging from red tape to the reaction of their families and friends.

Couples like Ulia and Alexander are trying to dispel some of the stereotypes about both the adoption process and the children up for adoption.  The state is also taking a more active role in preparing adoptive parents.

Today, potential adoptive parents in Russia are required to complete a course that covers the legal and psychological challenges of adoption. The classes have three main parts. The first segment discusses the legal aspects of adoption and guides parents through the process. The second part focuses on medical challenges and is mostly geared towards those who want to adopt a child with special needs. The third part covers the psychological challenges of integrating an adopted child into a new family and home. The classes, which consist of three-hour sessions held twice a week, run for approximately two months.

Khashem, who felt she was already prepared for the process, found that the classes taught her to look at the process in a different way. "I think it's crucial to understand the psychological side of it. When I first joined the group, I was very frustrated that they were talking so much about that and less about the legal side, since I thought the latter was so much more important! And then I realized that they were right. Many people jump into the process without having done a thorough assessment of the capabilities and strengths, which is why we have such a high number of children returned to the orphanages."

Lyudmila and Ivan Moruchkov turned to adoption after the death of their first child.

"Both Vanya and I found ourselves in a black hole, with no way out," Lyudmila said, referring to her husband by his nickname. "I was ready to jump out the window, and my husband had turned to the church. We had lost our reason for living and we didn't know what to do. And just then, a woman we knew who had contacts at an orphanage mentioned a boy, and we went to look at him."

Before the Moruchkovs adopted their son, Matvei, they had to complete a number of steps before being able to take him home.

Potential adoptive parents have to provide a short autobiography, proof of employment and regular income, proof of housing, a criminal check, a full medical assessment document and proof of marriage (if married). Parents must also get permission from all members of the family living in the same house — and each member has to come and sign the papers in person.

Since adopting Matvei, the Moruchkovs have adopted two other children. Adoptive parents select children they are interested in from databases and from visits to orphanages and hospitals. Prospective parents can leave a profile of the kind of child they are looking for with orphanage and hospital administrators, who call if they know of a possible match. 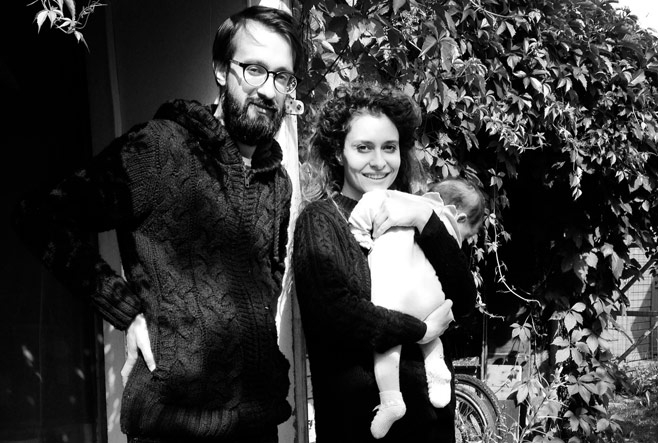 Ulia Khashem and husband Alexander Tishkov with their baby Maya.

Is This Baby Healthy?

Many potential parents are put off by the fear that all children in orphanages have serious medial problems.

According to Khashem, fears about the health of a child are not unfounded. "Of course, as the lives of the biological parents are unknown, and there is always a possibility of FAS [Fetal Alcohol Spectrum] Disorders," she said, but she was quick to point out that most of the time, there are at least two ways of checking the child's health. First, each orphanage is associated with a hospital, and children have regular check-ups. The medical record for each child is shown to the potential parents at the first visit. In addition, each adoptive parent has the right to take the child for an independent medical exam, although the process for obtaining the additional check-up varies.

"My friends examined a child in a private clinic, and the orphanage had no problem with it," Khashem said. "But in our case, they said that we had to do the exam at the hospital where the child was already a patient." In the end, she decided not to get a second check-up for Maya.

The names of the orphanages also give an indication of a child's health. Khashem's daughter Maya, for example, was at a Psycho-Neurological Children's Center.

"When we first came to see her, the doctors told us she had something wrong with her eyes and wasn't developing properly," Khashem said. "But after talking to my friends who have successfully adopted — and from what I learned in the classes — I knew that children in institutions don't get enough attention and maternal care. This is true even of children living in good conditions. Because of that,  their development can run a little behind."

The length of time required to qualify for adoption is also off-putting to many potential parents. Khashem says that the process usually takes about six months, but she thinks the wait is useful.

"A lot of people dive into the whole thing too quickly and then find themselves not ready for all the work. It's important to talk to people who have successfully done it — not just about the process, but about the way your life will change."

But for Khashem, dealing with the bureaucracy was the easy part.

"The hardest part for me was looking for the child. You look through all these databases, call them up — but most of the time the information of the websites is so outdated that the children have already been adopted. There is also a legal issue: a lot of children at the orphanages have either a parent or a relative who is technically their guardian, which makes it impossible to adopt them."

For Lyudmila Moruchkova, "the most difficult part was the waiting after you have met the child, even though it's just a week or two. You already have this feeling that he is yours — but you can't yet take him home. It's very painful."

To speed the process up, adoptive families are allowed to take the children home before the adoption becomes finalized. Parents can apply for custody, which is relatively easy to get, and the child lives with the new family as the adoption process winds its way through the legal system.

Neither Khashem nor Moruchkova hide the fact that their children are adopted. "How you present it is how people accept it. I feel very strongly about this. That's why I think it's important to tell children as early as possible that they were adopted. That way they won't think that they have been lied to and that it's a bad thing. Nowadays there are so many fairy tales that make it easier to explain, even to little children. Everything can be presented in a positive way," Moruchkova said.

"I think the society is definitely moving forward. We have already come a long way from Soviet times, when all these things were hidden away," said Khashem.