By Arthur House for The Calvert Journal.

Ask someone in Britain or America what they think about eastern European food and you'll probably hear something about grim Soviet restaurants, gloopy stews or boiled potatoes. Luckily, Ukrainian chef Olia Hercules is on a mission to change all that.

For her new recipe book "Mamushka," Olia has drawn on the culinary secrets of her mother, aunts and grandmothers — a multicultural heritage taking in Ukraine, Armenia, Moldova, Georgia, Siberia, Azerbaijan and Uzbekistan. The result is a pan-eastern cornucopia of flavor, freshness and color set to blow away the drab western stereotypes of the region's cuisine. 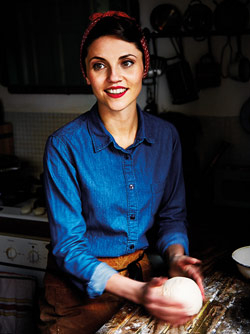 Originally from Kakhovka in the south of Ukraine, Olia moved with her parents to Cyprus at the age of 12 and came to England at 18 to go to university. After studying international relations at Warwick she embarked on a career as a chef, training at Leith's and working for Yotam Ottolenghi before writing "Mamushka," which came out this June. Olia lives in north London with her three-year-old son, Sasha. The Calvert Journal caught up with her in an east London cafе́.

Q: Your stories of warm Ukrainian summers and abundant produce may come as a surprise to some western readers who are used to a drab image of eastern European food. Do you think people are becoming more curious about discovering the truth behind the stereotype?

A: Eastern European food definitely has a bad rep. One editor I spoke to before I got the book deal based his entire image of eastern European food on something grey and horrible he'd eaten in a Czech restaurant in the 1970s. Someone else asked me whether I was writing a whole book about potatoes. There's been a spotlight on Ukraine since last year for unfortunate reasons, but it's made people think about the country and want to find out more. It's been 25 years since the fall of the USSR and hardly any cookery books have come out in the west about the region.

Q: How important is food to Ukrainians and to their national identity?

A: Farmland and produce is ingrained in our identity. The long, hot summers and rich black earth where I'm from, in the south of Ukraine, are perfect for growing food. Ukrainian and Russian recipes can be quite similar but it often comes down to the produce involved. During Soviet times many people lived in communal apartments and had to rely on the horrible stuff that was available in Soviet shops, whereas my grandma in Ukraine had a little goat and a cow and grew her own food. It's all about a relationship with the land.

Q: Is there such a thing as a single "food culture," in such a diverse country as Ukraine?

A: Not really. I cooked some recipes from the book at a pop-up recently in Leeds and some of the western Ukrainians that came were like "Oh, we've never tried this." Of course they knew vareniki and other typically Ukrainian dishes that have a lot to do with Poland, but they weren't that familiar with the stuff we cook in the south. But then a friend took my book to her mum in Siberia, who is originally from Luhansk in eastern Ukraine, and she was familiar with most of the recipes, even if they'd been given a bit of a modern twist.

I was so excited about everything I saw in my grandmother's village. Babushkas with their goats, men fishing, the mountains of herbs at the market 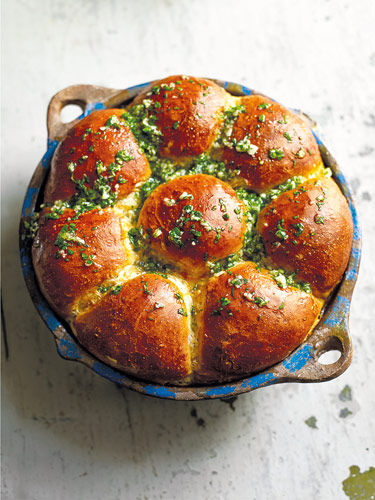 Garlicky pampushki are a classic Ukrainian accompaniment to borshch.

Q: So would you say that Ukrainians are open to new culinary influences and ideas?

A: We're like sponges. All kinds of foods are welcome. My grandmother came to Ukraine from Siberia, having met my Ukrainian granddad on the train to Uzbekistan. She brought recipes with her and shared them with people. We had Crimean Tatar friends who gave recipes to my auntie years ago, and there's an old Greek community near the Sea of Azov that makes plakopsi, one of the recipes in my book. It probably originated in Greece many, many years ago. If you go to a market in Ukraine you'll always see morkovka, which are pickled Korean carrots — really spicy and delicious. The Korean community couldn't find any Chinese cabbage when they came to Russia and Ukraine so they started using carrots. Now they're almost a national dish in Ukraine.

Q: You've actually lived longer outside Ukraine than in it. How do you feel going back there now?

A: I'm lucky enough to have experienced it from both sides. I remember queuing for mayonnaise with my mum when it was still the USSR and what it was like to go abroad for the first time — all those lights! But now I'm a British citizen I see Ukraine with fresh eyes. When I went back last year I was so excited about everything I saw in my grandmother's village. Babushkas with their goats, men fishing, the mountains of herbs at the market — purple basil, dill, coriander. The huge pink tomatoes that you can taste the sun in. 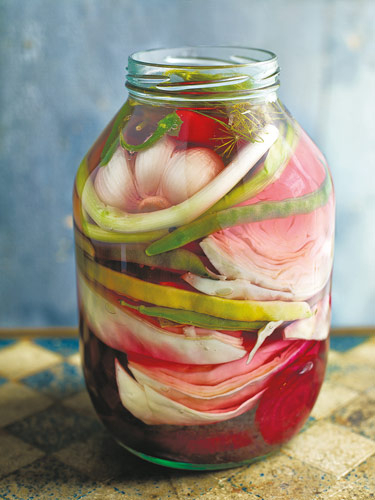 Q: The healthy, organic, homegrown food you're championing seems to chime with recent food trends. Do you think the time for Ukrainian food has come?

A: I think so, yes. And it's so funny how people in London are fermenting things all of a sudden. There's a chapter on fermentation in my book. It's just what we grew up with because it's so seasonal in Ukraine. In August when everything's abundant with berries and vegetables you start preserving things. Last year my auntie had things fermenting everywhere on the shelves and in the cellar, preserving the summer for winter. Even the soft herbs were preserved. Aubergines, whole watermelons — we ferment everything.

Q: Did your experience working for Yotam Ottolenghi inspire you when you were writing "Mamushka"?

A: I love what he's done with Middle Eastern food but my approach isn't as conceptual as his. All my recipes have something to do with my family, so they're more personal. I do like a bit of fusion though — I added tamarind chutney to my beetroot and prune salad recipe after I tried it at the Leeds Indie Food Fest.

Q: So your recipes aren't only about where you've come from but also about what you pick up along the way?

A: Exactly! I love that. It's a journey. 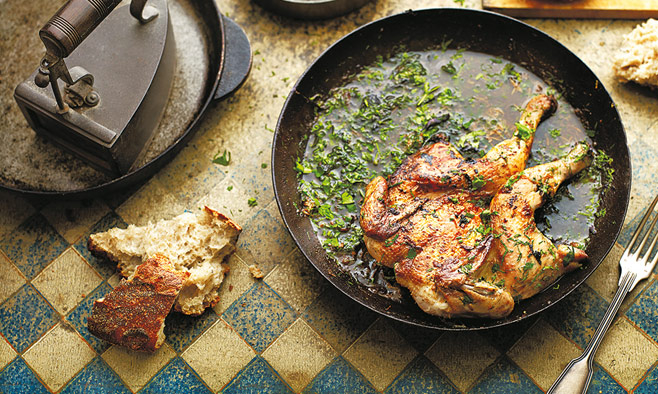 Q: Have you noticed attitudes to food changing in Ukraine since the revolution?

A: People are a lot more proud of what we have. But then we've always been proud. My uncle, who is Ukrainian but lives in Moscow, said that his friends always used to ask him whether it was true that Ukrainians eat borshch for breakfast, lunch and dinner, and he told them "If you could cook borshch like us, you'd get up in the night to eat it." We are proud of what we cook and how we do it, but I haven't noticed it developing into some kind of nationalistic attitude.

Q: Borshch is an interesting one, because it's often mistaken for being a Russian dish.

A: Yes. I've always known borshch as our national dish. When you think Ukraine you think red borshch. That's why it's the first recipe in my book. I thought people have to know that it's not some kind of pureed bread soup. It's a really rich meaty stock. 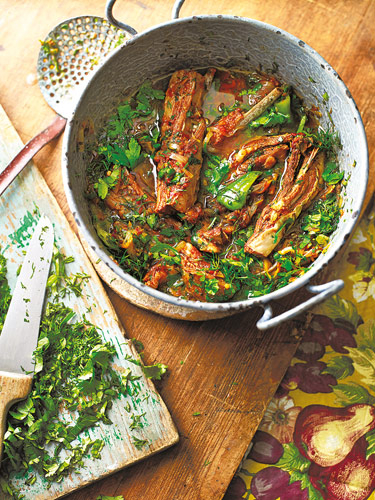 Q: Do you think that food can offer a route to understanding between different cultures?

A: Yes, that's partly what I'm trying to do here. In my book there's a Russian broth, there are Georgian dishes, Uzbek dishes, Armenian, Moldovan, and so on. Even though the Soviet Union suppressed the individuality of the countries within it, somehow those dishes survived all that.

Q: Which one easy recipe from your book should we all learn this summer?

A: Radish, tomato, cucumber, dill and spring onion salad. So simple, fresh and tasty. You can add a dollop of sour cream as a dressing or dip bread into the red juices. Or the cold beetroot soup with fresh horseradish. Or the Georgian garlicky poussin. Or the vareniki (steamed dumplings) with strawberries… 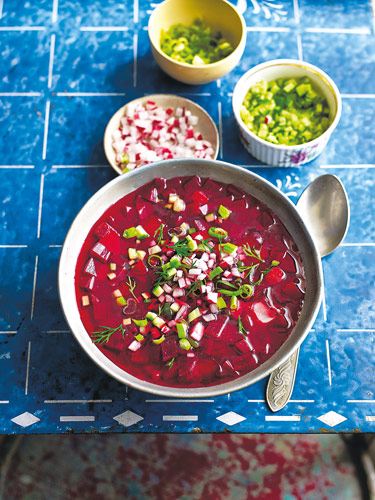 This is incredibly refreshing in the summer. I guess it's a hybrid of something that Russians call okroshka (which comes from kroshit, meaning "to chop into small pieces") and the Ukrainian kholodnyk ("the cold one"). I like the idea of brining the beetroot first. And I like the idea of fresh radishes and cucumber in it, too. Add a small splash of sherry vinegar, and a tiny bit of Tabasco if you can't find fresh horseradish, to funk it up a little.


1 Place the beetroot in a bowl or container, cover with the water and add the sea salt flakes and the sugar or honey. Leave it in your kitchen at room temperature for two days to let it brine lightly.

2 Drain the beetroot, reserving the brine. Cut it into thin slices and then into 5mm dice.

3 Place the beetroot, stock and 300ml of the reserved brine in a saucepan, taste for seasoning, then bring to the boil.

4 Add the potato and cook for 15 minutes or until cooked through. Let the broth cool, then cover and chill in the refrigerator.

5 Add the horseradish just before serving (it is so volatile, it will make you cry but will dissipate into thin air quite rapidly). Serve the soup chilled, with an ice cube or two added, and garnished with the radishes, cucumber, spring onions and dill.

"Mamushka" is available in the UK on Amazon and will be released in the U.S. in October.