With the way things are going, it might be time to start brushing up on your Cold War history. The Moscow Times, always a step ahead, has investigated the best of the Back to the U.S.S.R. museums in the city. These are the museum versions of highest-ranking officers present and correct, so be sure to polish your boots, scrub up well and pay close attention. Not too close though, as you wouldn’t want to be mistaken for a foreign spy now.

Hidden more than 60 meters underground lies Bunker 42, constructed under the orders of Joseph Stalin in the early 1950s to provide headquarters for the U.S.S.R.’s nuclear military personnel and refuge in the event of an atomic attack on the capital. Today the bunker has retained all of its intrigue, but thankfully none of its threat. Tours are available around parts of the tunnel complex, where you can come face to face with one of the first versions of the Soviet atomic bomb, experience the horror of red flashing lights signaling an attack on Moscow, and do what you’ve always dreamed of — simulate firing nuclear warheads at the USA, all while wearing a funny hat. Other areas of the bunker have been converted into perfect party venues: organize a laser-quest or zombie-attack themed birthday party in dark back-tunnels, or for a more dignified affair, relax in one or more of the bunker’s not-so-secret bars.

It calls itself a museum, but this place is a veritable time portal. On entry you are given a handful of 15 kopek coins which you can use on all sorts of arcade machines such as the classic Battleships (“Morskoi Boi”), shoot-outs, car racing, and even what appears to be the Soviet version of Tetris. Some of the games are utterly incomprehensible, but don’t let this worry you: you and your kids will be in a gamer’s paradise. When you’ve got yourself all hot and bothered, use your remaining few coins on real, functioning Soviet kvas, juice and water dispensers, and take a few snaps in the retro photo booth. This is a world of color and a world of fun. 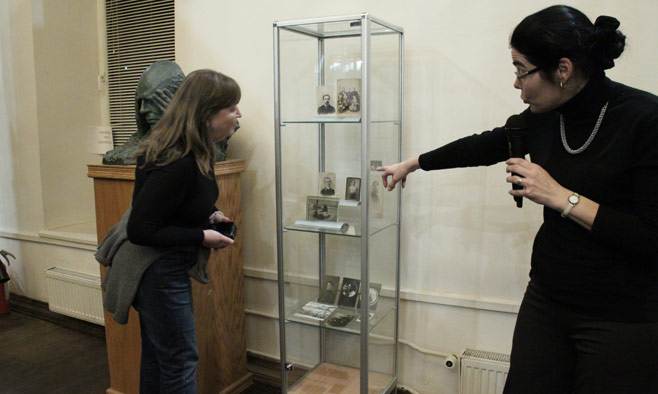 Call ahead for a fascinating English-language tour at the Sakharov Center.

This museum is under almost continual threat of closure from the authorities who regard its subject matter — in essence the “bad side” of the U.S.S.R. — as a danger to the minds of modern Russians. The center frequently runs discussion groups, lectures and workshops on various subjects such as the gulag prison system and Soviet dissidents. Their permanent exhibition features comparisons between Soviet propaganda and photographs of the reality of life, remembrance of the Gulag and a large section dedicated to the life of Andrei Sakharov and his fellow dissidents. Tours around these displays are available in English from their dedicated team of staff who are always absolutely delighted to welcome visitors. Support them and their center — it’s free!

Central Museum of the Armed Forces

If it looks like an imposing building from the outside, just wait until you get inside. A gigantic bust of Lenin acts as the centerpiece of the museum’s hallway, set against a backdrop of pure socialist realist art in the form of a huge expanse of red mosaic tiles depicting Soviet heroes. This really does set the tone. Undeniably the halls of the museum are the height of kitsch with large painted dioramas on the walls and mannequins poking their heads out of plane wreckage or the tops of tanks, but the content, albeit almost exclusively in Russian, is comprehensive and engaging. A full visit could take well over two hours, so if you’re in a rush, don’t miss the case of soil taken from Stalingrad — yes, it’s weird, but go with it — the installation celebrating the fall of Nazi Germany, quite breath-taking in its brutality, and the outside collection of tanks, planes, helicopters, rocket launchers, missiles, and you name it. Children will love the last bit, and it’ll make up for showing them the soil.

Now sadly one of the last surviving museums on this subject, the Museum of Gulag returns later this year in a new, modernized location with four times the exhibition space. As well as the expansion of the very moving permanent exhibition, a library and study centers will make the museum a place of education as well as an exhibit. The construction of the new building has also factored in a garden of remembrance. Catch it when it reopens on Oct. 30.