It has been 20 years since British writer Patrick Marber's first play, "Dealer's Choice," was staged at London's Royal National Theatre. 1995 was also the year he was famously "shot dead live" on a BBC comedy show.

Since then Marber has left television comedy behind and has written roles for Judi Dench, Julia Roberts and Cate Blanchett. He's been away from the theater for several years due to a professional ailment: writer's block. "You can call it whatever you want," Marber explained to The Moscow Times in a telephone interview from London, "But I stopped writing and I couldn't write and didn't feel like writing. I suppose you could call it depression, but it amounts to the same thing."

But 2015 is Marber's year in London theaterland. His sexually bold play "Closer" returned to the Donmar Warehouse, and his play about non-league football, "The Red Lion," debuted in the summer. And now: "Three Days in the Country." This is his new adaptation of Turgenev's play, "A Month in the Country," which he is also directing on the Lyttelton Theatre at the National until October.

The first major revival of the play at the National since 1981, it stars John Simm as Rakitin and Amanda Drew as Natalya and has played to excellent reviews since opening in July. "It is a masterly work, as both director and adapter' said Ian Shuttleworth in the Financial Times.

But Michael Billington in The Guardian thought it even more an "adaptation" than previous productions in London, remarking, "Marber has changed our perspective on key characters. Belyaev, the tutor, is not the shy, innocently disruptive figure we are used to, but something of a political firebrand who seems akin to the dedicated nihilist, Bazarov, in Turgenev's 'Fathers and Sons.' Even more radical is Marber's treatment of Natalya's platonic admirer, Rakitin, who is no longer the superfluous man so familiar from Russian literature but a thwarted sensualist who lives off the memory of his hostess's kisses."

Ivan Turgenev's 1855 drama (not produced until 1872) was brought to Marber by West End producer Sonia Freidman.

"She just liked the play and thought I might enjoy doing a version of it," Marber told The Moscow Times. "And she was right. Initially I thought 'this is too long.' It didn't immediately strike me as something I could do. It just stayed with me over a period of a couple of months, it grew on me and I just fell more in love with the characters and the predicament of the play. And I saw a way in which I could enjoy working on it. So it was a slow burn, really." 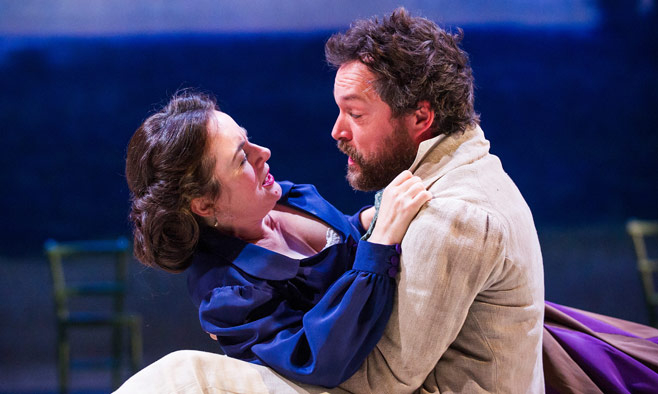 Actors Amanda Drew and John Light as a passionate Natalya and Arkady.

Adaptations of the classics often inspire radical settings and changes. Marber himself has done this with other adaptations, but here he has retained the original mid-19th-century setting. Also, while the complete original text clocks up four hours of theater time, Marber's version runs just over two hours, including an intermission. And there are other significant alterations.

"Actually, Turgenev's play doesn't take place over a month," he explained. "It's called 'A Month in the Country' because that's how long the student in Turgenev's version is in the country for. But the play actually occurs over six or seven days, so I just changed it to three days. So I haven't really done much with the temporal structure of the play. Turgenev's play is a five-act play; so is mine. The main difference is to shorten it and to give it a new ending. And I emphasized some elements of the play over other elements. Someone who knows the play well will know what I've done with it, but most people who have a casual encounter with it will not. More or less the same things happen to the same people. I'd say my changes are incidental details rather than fundamental."

"I've written a new ending," he added. "So the last scene of my play doesn't exist in the Turgenev. I've added, as it were, a coda to the play."

So far there is no word of a movie version, but Marber has plenty of experience with screen adaptations, some good and some bad.

The success of 1997's "Closer" lead to his own screen adaptation in 2004, for which he was Golden Globe and BAFTA nominated. Then came his screen adaptation of Zoe Heller's "Notes on a Scandal" in 2006, which brought him an Academy Award nomination. In 2008 he wrote a short film for director Sam Taylor Johnson, and then at the director's request did a quick rewrite on the screenplay of E. L. James' "Fifty Shades of Gray," but in the end his rewrite wasn't used.

Whatever the story, Marber isn't talking. "Contractually, I'm not really allowed to talk about the work I did. I enjoyed doing the work and I got paid. I'm contractually obliged to shut up about it."

"Three Days in the Country" marks Marber's first time with the Russian classics, which have the advantage of being contractually open. "I spent time a couple of years ago looking at some Chekhov that I might one day do a version of," he explains, "but yes — this is the first time I've taken on an old Russian play and I found it very enjoyable to be in that world."