Alexei Nikolayev, a Moscow photographer specializing in photo stories about Russia and the former Soviet republics, went to Afghanistan to document the lives of six former Soviet soldiers who had been imprisoned by mujahedin during the Soviet-Afghan war in 1980s and never returned home.

Overall, 620,000 Soviet troops took part in the war, which lasted from December 1979 to February 1989, with official Soviet military losses of over 15,000. When the Soviet army withdrew, hundreds were left behind. Officially, 417 people were declared missing and/or prisoner or war.

While some former prisoners of war began to come back to Russia in the 1990s, many decided to stay. Some didn't want to come back since they were deserters or had already converted to Islam. After the collapse of the Soviet Union, in the chaos of political and social changes these people seemed to be forgotten.

In the summer of 2013, Alexei Nikolayev visited ex-Soviet soldiers in the wildest parts of Afghanistan and saw their successful integration into Afghan society. 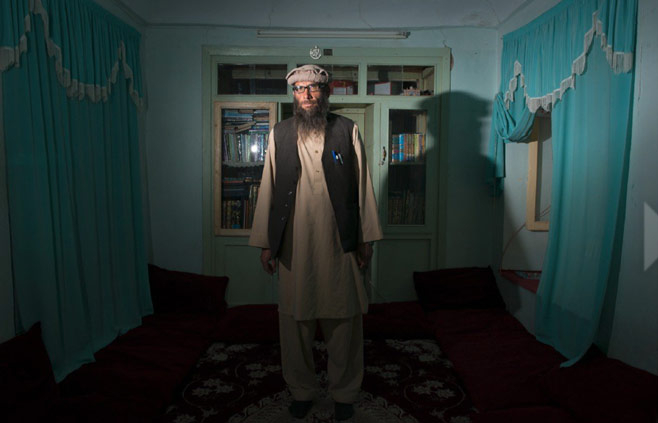 While some former prisoners of war began to come back to Russia in the 1990s, many decided to stay.

Alexei, why did you decide to take on this project about the Soviet-Afghan war?

First of all, for personal reasons. My stepfather served in Afghanistan, and I remember as a child listening to him tell stories with his army buddies.

Later in 2012 when I was interviewing Afghan veterans in Moscow, I realized that the Soviet-Afghan war was a very big, significant part of the history of the U.S.S.R. The country may not exist anymore, but I grew up in it and still belong to it. I wanted to know much more.

How did you find the men for your book?

First I found Nikolai Bistrov, who now lives in in the Krasnodar region [southern Russia] — he used to be the personal bodyguard of Ahmad Shah Massoud [military commander, minister of defense of Afghanistan 1992-96].

He told me about many Russians who were still in Afghanistan or who had come home. These soldiers had come back recently and didn't want to meet for an interview. So I decided to fly to Afghanistan to meet others personally. 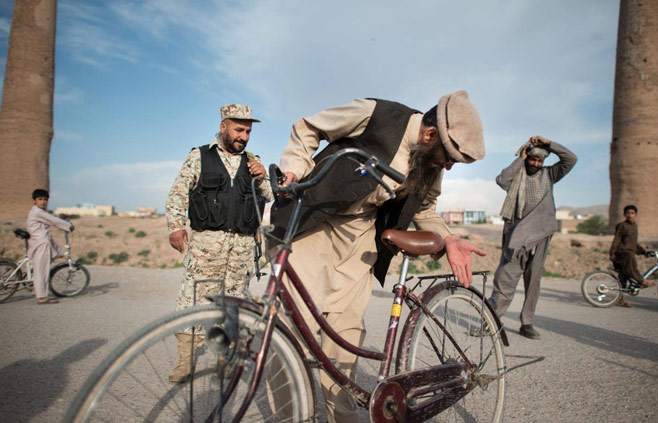 Khakim Bakhretdinov, now Sheikh Abdula, tinkering with his bicycle. He is one of about 500 former Soviet servicemen to stay in Afghanistan after the war.

Was it easy to travel to Afghanistan?

In Russia I had no problem obtaining a journalist visa. But from the moment we landed in Kabul, my fixer and I were under constant surveillance. Once I was imprisoned in Kabul for 11 hours because I'd taken a picture of a wall of a building that is forbidden to photograph.

In small cities like Kunduz or Chaghcharan, it was even more extreme. People from the local committee of security or police department were constantly trying to accompany us, explaining they wanted to protect us.

It's no wonder — there is constant military conflict in the country.

Yes, it was terribly dangerous. When we went to Ghor Province in central Afghanistan for an interview, we went up to a roof at night and saw fighting only three or four kilometers away.

There is constant fighting between different tribes and gangs … The authorities can only keep the situation under control within a guarded perimeter. Outside the city, it's basically a no-man's land. 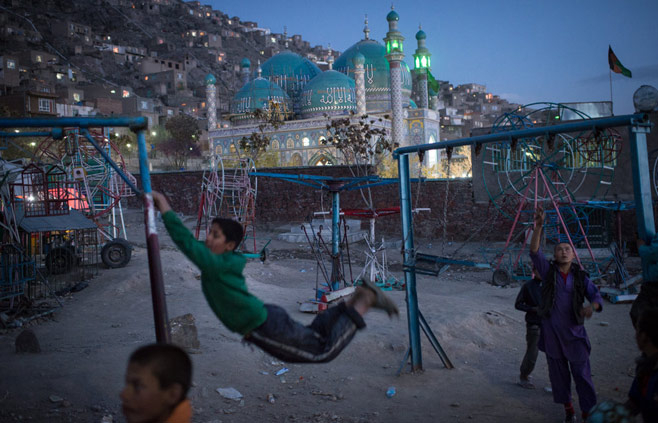 Young boys having fun in a run-down playground near a mosque on the outskirts of Kabul just as twilight falls.

The situation is so dangerous that when I asked a former Soviet soldier I interviewed if I could come back to his aul (village), he told me: "No! Don't come back! Everyone here already knows that you are a journalist and not an Afghan. Someone might come in the night and abduct you."

Was it easy to talk with the men?

Yes, they were willing to speak. The most easygoing and interesting person was Sergei Kransnoperov, whose local name is Noormomad. He lives in Chaghcharan, a town in central Afghanistan. I was the first Russian journalist who visited him.

We spoke in Russian, he formulated grammatically simple sentences and sometimes confused the endings.

When I looked at him, I saw a typical Russian man. His six children are all blond and blue-eyed. But despite their Russian appearance, they are totally immersed in the local culture. When I visited him, his son obediently served us food. The way they received guests was very ritualistic and patriarchal. It's not common in Russia anymore. 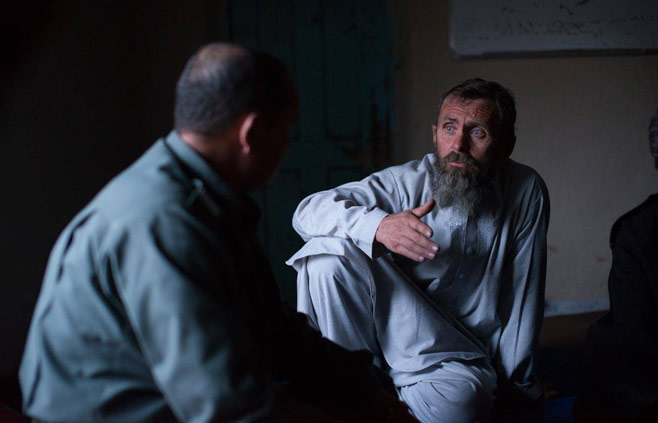 After so many years, Krasnoperov prefers Dari to his native Russian.

Are they happy in Afghanistan?

Yes, they all are married and have happy families. Sergei Kransnoperov is the most successful person I met. When he was a soldier during the Soviet-Afghan war, he had a conflict with someone at a military base and left to try to make his way home. But he was captured by mujahedin and spent a year in captivity, until he converted to Islam and was released.

Now he has two jobs as a road constructor and an electro-mechanical technician at the local hydroelectric power station. He earns more than $1,000 a month, a very good salary for the region, and built a house. He is in great demand in Afghanistan and wants to stay there. He is afraid he wouldn't find any work back in Russia.

Another person — Alexander Levenets, whose local name is Ahmad — has also adapted really well. He converted to Islam and went on the Hajj, the annual Islamic pilgrimage to Mecca, last year. He works as a taxi driver and is happy with his job.

But others aren't so happy. Gennady Tsevma, whose local name is Nekmuhammad, lives in Kunduz. He was disabled by a leg injury in the war and can't work. He has no pension and gets no proper medical care. I even had to pay him for the interview — it's one of few ways for him to earn money. 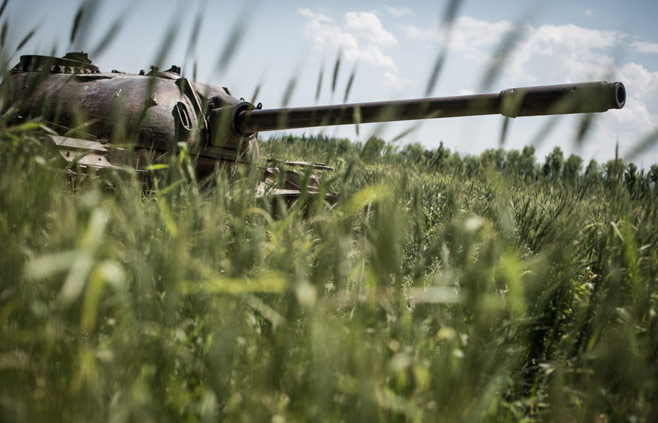 A Soviet tank, destroyed during the fights on the field near the town of Kunduz.

In the introduction to the book, you mention that some of the men are now so far from Russian culture that they even think in Dari.

Yes, some don't remember Russian at all. For example, a man from Samarkand, Uzbekistan now living in Herat. During the Soviet-Afghan war, he had a serious head injury — I could see a deep dent in his skull. The wound caused memory loss. All he remembers are the words spasibo and pozhaluista ["please" and "thank you" in Russian], so we spoke through a translator.

Did anyone ask for help getting back to Russia?

No one. They don't need my help — at any time they can come back very easily just by calling the Warriors-Internationalists Affairs Committee in Moscow.

They don't do it because they have found their home in Afghanistan. Many of the men who attempted to come back to Russia in 1990s and 2000s faced difficulties. Afghanistan became their home, as Russia could not give them anything. The country itself was in trouble.

For example, I heard about a man named Yury Stepanov, who came back in 1996, lived in Bashkortostan for a half a year, couldn't get a job and returned to Afghanistan, where he got far more work offers. He built a hydropower station and set up a television satellite for the residents. 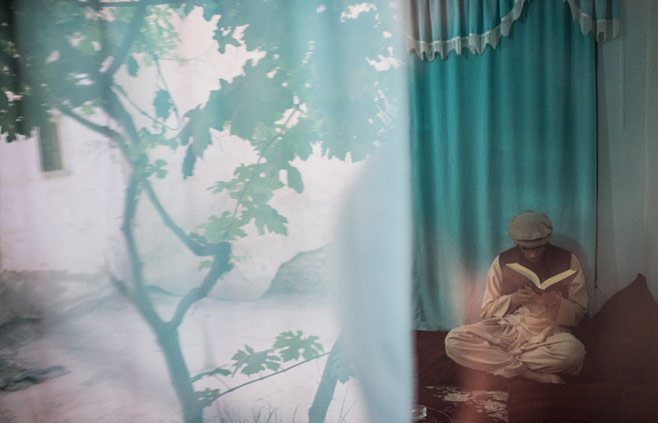 Khakim Bakhretdinov (Sheikh Abdula), one of the book's characters, sits in his room in Herad's Jihad museum.

Why did so many POWs stay in Afghanistan?

Because the Soviet Union collapsed. If the country hadn't disappeared, they would have returned much earlier and would have been able to adapt much more easily.

And then, most of the men in the book were just afraid to come back — they were deserters and were not hailed as "war heroes," despite the amnesty for them announced in 1989.

But they are living good lives and Afghans like them. In general, the Afghan people respect Russians. When my translator and I were drinking tea in a local chaikhona ("tea house") in Chaghcharan, some local people told us: "We had a war with you, but the roads and hospitals that we still use were built by you." Amazing that they still remember that!